November 13, 2020 by arstechnica No Comments 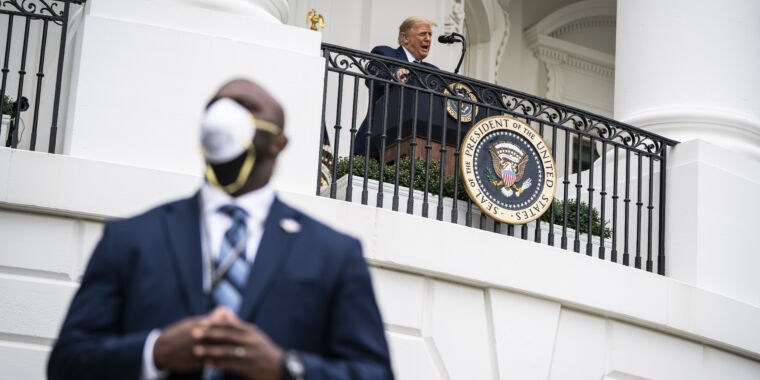 The latest coronavirus outbreak at the White House continues to expand and has now sidelined roughly 10 percent of the Secret Service’s core security team, according to a report by The Washington Post.

More than 130 Secret Service officers who guard the White House and the president are now infected or in quarantine after close contact with infected co-workers. A former senior Secret Service supervisor told the Post that missing over 130 of the agency’s 1,300 officers in the Uniformed Division “does not bode well for White House security.”

People familiar with the matter have linked the spread of the coronavirus among Secret Service agents in part to the president’s whirlwind travel and crowded campaign rallies in the run-up to the election. The agency is also looking into possible exposures at the White House.

The White House has been a repeated hotbed for coronavirus transmission and is in the midst of a new outbreak—its third since the pandemic began. Health experts have often expressed a lack of surprise at transmission dynamics there. The administration and staff have largely eschewed mask-wearing and social-distancing recommendations. Lame-duck President Trump has also held several mass gatherings, involving mostly maskless people in close proximity indoors. Throughout the pandemic, Trump has repeatedly downplayed the virus, even after he spent several days in the hospital with COVID-19 and underwent two experimental treatments and a powerful steroid.

The current outbreak has reached over a dozen White House aides, including some low-level secretaries and assistants, as well as some high-profile officials and advisers. The tally includes White House Chief of Staff Mark Meadows, Secretary of Housing and Urban Development Ben Carson, and outside political advisers Corey Lewandowski and David Bossie.

The wave of positive cases came in the wake of an election-night party held at the White House. Trump hosted hundreds of people to watch the election results come in, many of whom mingled without masks. The event violated the District of Columbia’s coronavirus guidance.

The new White House outbreak comes as the country as a whole is seeing a nightmarish vertical rise in cases, hospitalizations, and now deaths. States and nationwide tallies are breaking records on a daily basis, with disease and transmission higher than it has ever been. On Thursday, the US tallied over 150,500 new cases, a record number that is nearly double the highest total in the country’s last peak in July. And the current surge has not yet peaked. Meanwhile, hospitals in many states are being overwhelmed in the surge. Currently, a record 67,000 people across the country are hospitalized. Deaths are also shooting up, with a spike of over 1,500 on Wednesday.