November 19, 2020 by arstechnica No Comments 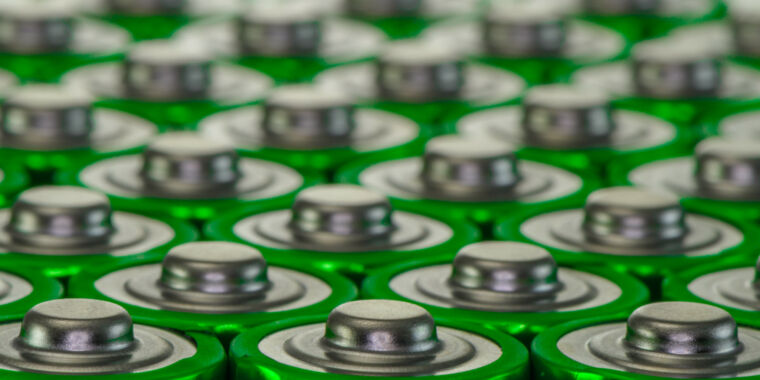 As electric vehicle adoption grows, the need for battery recycling is growing along with it. Typically, recycling involves breaking the battery down into pure chemical components that can be reconstituted for brand-new battery materials. But what if—at least for some battery chemistries—that’s overkill?

A new study led by Panpan Xu at the University of California, San Diego shows off a very different technique for lithium-iron-phosphate (LFP) batteries. This isn’t the most energy-dense type of lithium-ion battery, but it is economical and long-lived. (It’s the chemistry Tesla wants to rely on for shorter-range vehicles and grid storage batteries, for example.) Its low cost cuts both ways—less expensive ingredients mean less profit from recycling operations. But rejuvenating the lithium-iron-phosphate cathode material without breaking it down and starting over seems to be possible.

The idea behind the study relies on knowledge of how LFP battery capacity degrades. On the cathode side, the crystalline structure of the material doesn’t change over time. Instead, lithium ions increasingly fail to find their way back into their slots in the crystal during battery discharge. Iron atoms can move and take their place, plugging up the lithium pathway. If you could convince iron atoms to return to their assigned seats and repopulate with lithium atoms, you could have cathode material that is literally “as good as new.”

The first step is “relithiation”—bathing the powder for a number of hours in a heated lithium solution that also included some citric acid. The warm temperature (around 80°C/175°F) and citric acid help the iron atoms return to their homes in the crystalline lattice and help the lithium ions pop back into place.

After washing and drying the powder, the team tested new cathodes made with the recycled material. But while this showed “like new” capacity, it degraded fairly quickly. So the researchers added a second step in the process: annealing the dry powder at much higher temperatures.

Over several hours, the rejuvenated powder was heated to 600°C (1,112°F), held there for a while, and then cooled back down. This improved the order and stability of the crystalline structure in the powder particles, and the cathodes made after this process held their capacity identically to the brand-new ones through 300 charge cycles.

This “direct recycling” process has a strong economic advantage over typical methods. The researchers say it uses 80-90 percent less energy and consequently is associated with around 75 percent less greenhouse gas emissions. For LFP batteries, the researchers estimate that hydrometallurgical processes (based on dissolving materials and chemically separating them) run at a net loss of around $1.40 per kilogram. Pyrometallurgical processes (which start by melting everything) are even worse, costing around $2.60 per kilogram. But the researchers’ direct recycling process can run at a profit, generating slightly over $1 per kilogram.

This technique might not be limited to LFP batteries, either. The researchers mention lithium-manganese-oxide chemistries, specifically, as a likely candidate. This is another common type of lithium-ion battery used in a range of applications.

As with any laboratory technology, there will certainly be challenges to tackle in order to scale this to a commercial recycling plant. But if it can be done, this approach could help expand the range of batteries that can be recycled economically, reducing the reliance on mining to supply virgin materials.