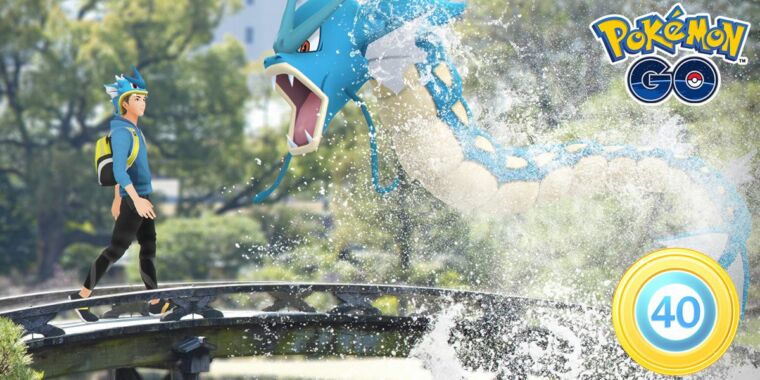 Players who reach Level 40 before the end of the year will be the only ones able to access a limited edition in-game Gyardos hat.

If you’re still playing Pokémon Go over four years after it first set mobile gaming records (and near-record revenue numbers in July suggest there are plenty of you out there), you’ve probably been stuck at the game’s experience cap of Level 40 for a while now. If so, you’ll be happy to hear that level cap will be increased for the first time ever, to Level 50, as part of an upcoming update branded Pokémon Go Beyond.

“Leveling up is one of the most important and meaningful aspects in the game,” Niantic Product Manager Philip La said during a press presentation. “Reaching the current cap of 40 is a ‘badge of honor’ that other trainers will recognize. Some have reached it multiple times over. Now is the right time [to increase that cap]. Many dedicated players have achieved so many milestones and [are] looking for new challenges.”

While Niantic isn’t discussing specific timing for the level cap update (beyond “soon”), the company did say that trainers who hit the current level 40 cap by midnight on Dec. 31 will receive a “Legacy 40 Trainer” badge and additional “exclusive rewards.” That seems to suggest leveling past 40 will be available in early 2021, if not as soon as the year transfers over. A few lucky Level 40 players in Australia will get to test the new level cap in the coming weeks.

If you haven’t hit Level 40 yet, Niantic will be doing what it can to help you get there. Starting Nov. 30, pretty much every action in the game will be “rebalanced” to give more XP than it did previously. And starting Nov. 18 through the end of the year, catching Pokémon will be worth double the normal XP. During a “12 Days of Friendship” event, also starting Nov. 18, you’ll be able to open more gifts each day and increase your Friendship level faster for each gift opened.

If you’ve already hit Level 40, any additional experience you’ve accumulated since hitting the cap will instantly count toward reaching the new higher levels. But XP alone won’t be enough to get past Level 40—subsequent levels will also require players to complete new Level-Up Research tasks, such as making “excellent” throws or evolving all the variations of Eevee, for instance.

“Once you hit [Level] 40, the ‘endgame’ experience should feel like a new game,” Senior Game Designer Matt Ein said in a press Q&A. “You need more than XP. You need to be a well-rounded trainer.”

Higher trainer levels also means the ability to power up your top Pokémon to higher levels as well. But doing so will require a new “Candy XL” item, which can be acquired by catching Pokémon or by “converting and combining” standard candy. Trainers who haven’t gotten to Level 40 yet will also see new, higher caps for powering up their Pokémon.

Aside from a new level cap, the “Beyond” update will also see the rollout of new Pokémon from the Kalos region, first seen in 2013’s Pokémon X and Y. The update will also introduce a new calendar-sensitive “seasons” system, where different Pokémon become more or less common depending on the actual season in the outside world. This system will reflect differences in hemisphere as well, so Pokémon that are common in the Northern winter may be uncommon during the concurrent Southern summer.

The “Beyond” update’s change comes as Pokémon Go has been struggling to remain playable as more and more people increasingly stay home and avoid group gatherings during the COVID-19 pandemic. Throughout 2020, Niantic has rolled out a number of updates that “prioritize… Pokémon Go features and experiences that can be enjoyed in individual settings… based on the current global health situation.”

“2020 has been rough on everyone in different ways,” Niantic Product Marketing Manager Veronica Saron said. “Our team had a set of plans coming into this year that we were extremely excited about, but when the world changed in 2020 we had to pivot. Over the course of this last year we came together as a team to meet our fans where they were. We made sure we could continue to bring the best experiences to trainers around the world, in spite of the times.”