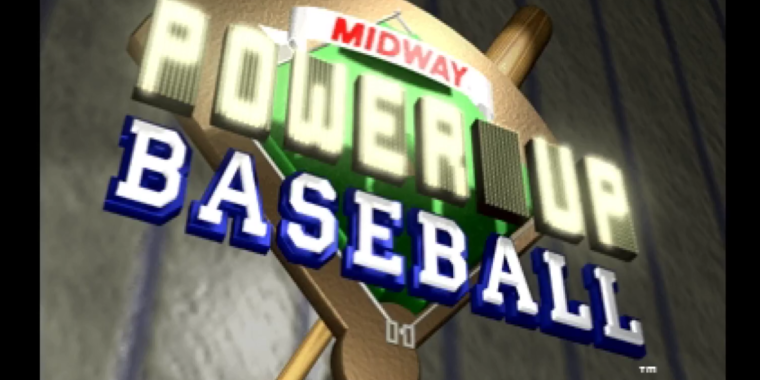 By the end of the 1990s, you couldn’t throw a quarter in most malls without hitting an NBA Jam or NFL Blitz cabinet. “Arcade sports” became a full-blown sensation, and hockey, soccer, and tennis received their own high-speed arcade conversions. But that list of American sports sure seems to be missing its slice of arcade apple pie, doesn’t it?

You may have wondered for years why baseball never got an “MLB Jam” equivalent during that golden arcade era. Turns out, the sport got close. Thanks to the Video Game History Foundation, a new ROM has been unearthed for 1996’s lost Midway arcade game, Power-Up Baseball, and some of its former devs have explained what exactly happened with its development and cancellation.

A rare pair of trackballs

Power-Up Baseball came out only one year before NFL Blitz, but back then, even a single year could be a lifetime in terms of technology.

The story begins with VGHF, which we’ve talked about at Ars, continuing its dive into a massive pile of unearthed code fragments stored by the family of late games developer Chris Oberth. Today’s VGHF blog post points to how this collection mostly focuses on Oberth’s personal code contributions to various game projects, as opposed to compiling entire teams’ collective code. One project proved an exception to that rule: a single CD-ROM with the word “baseball” handwritten in marker.

This was a goldmine for the seemingly lost Midway game, full of source code, art assets, and compiled ROMs. This build of Power-Up Baseball, dated from 1996 and built for Incredible Technologies’ custom 32-bit arcade platform, precedes the eventual “arcade baseball” action of MLB Slugfest 2003 by a considerable margin. (After learning about its existence, Ars’ Kyle Orland pulled off a tricky reverse look-up at archive.org to see that the game was known, albeit quite forgotten.)

As part of today’s information dump, VGHF has put together a lengthy two-player video (embedded below) showing how the near-complete build worked… which unfortunately makes clear why the game never saw a retail launch. The game was built largely by the aforementioned Incredible Technologies, an arcade game maker you may better know as the people behind Golden Tee, as a Chicago-area partnership with Midway. In interviews with VGHF, members of the PUB design team make clear that one very Golden Tee-like aspect is not evident in the uncovered ROM, and it allegedly helped with the game’s arcade fun factor: a pair of trackballs built into many of the test cabinets.

“Those trackballs took a serious beating if there were two serious people playing,” Incredible Technologies programmer Brian Smolik says. “To pitch, the faster you roll that ball, the faster you pitched, and the same with batting. So you had people slamming it as hard as they could. It was super intense. And nobody in the office could concentrate, because down the hall there’s two morons screaming and yelling and beating the heck out of this game.”

That use of a trackball to either wind up and toss pitches or crush them as home runs has never otherwise been replicated in a baseball game that we’ve ever seen. Sadly, nearly everything else about PUB had been done before—and arguably had been done to death on weaker home consoles like Sega Genesis by the time Midway’s arcade version was sent out for consumer testing. An extra “power-up” button let players spend a slowly charging energy gauge to either throw wild pitches or add power to hits, but PUB didn’t follow Midway’s arcade-sports streak by letting players break the rules or shove each other, and the lack of 3D visual polish didn’t help. The game’s sole violent exception came from an intentional bean ball option, but this gave the hitter a free base instead of paying off for the pitcher or otherwise feeling like an NBA Jam shove-down.

Project Art Director Alan Noon points to issues with the game’s 2D engine and its “Mode 7” perspective cheats as among its hiccups, along with the clunkiness of either trying to field a fly ball or manage baserunners. (In other words, slamming a trackball to belt out a home run offered more arcade-caliber fun than making an outfielder run over an empty field by himself.) Designer John Newcomer is more blunt about why the game stalled during its test phase: “You have to bring in a certain amount of quarters during primetime at the arcade.” He and other staffers agree that PUB never figured out how to translate baseball’s open-ended nature, with innings that can drag on, to something that would gobble as many quarters in a given amount of time as NBA Jam did. Changing the number of innings didn’t change the core money-spending issue, either, the former staff says.

The game’s quarter-munching potential “was ultimately the big mistake we made,” Newcomer adds. “We should have figured that out from the beginning.”

Still, as a rare dueling trackball experiment, PUB is certainly a fascinating curio from the dregs of arcade history, made all the more interesting by its recovered one-of-a-kind ROM. The accompanying oral history doesn’t hurt, either, complete with accounts of its NBA Jam-like digitization process and a handy guide of “power-up” pitches and hits as animated GIFs. VGHF has now put out the call for any other ROM versions that might be floating in the wild, since this one appears to be near-complete. Whether you have that juicy information, or you just want to imagine what arcade baseball in the ’90s might have been like, you owe it to yourself to read the full VGHF report—which also includes instructions for how to compile your own version of the game.