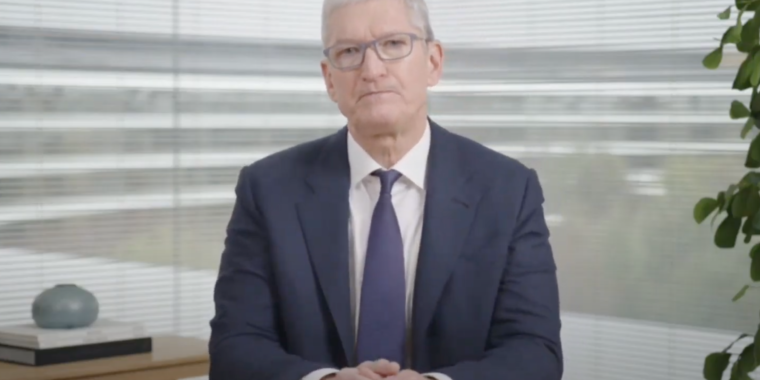 Today, Apple announced plans to finally roll out its previously delayed change in policy on apps’ use of IDFA (ID for Advertisers) to track users for targeted advertising. The feature will be in the next beta release of iOS 14 (the company just rolled out the public release of iOS 14.4 this week) and will reach all iOS devices supported by iOS 14 “in early spring.”

Apple made the announcement with a white paper and Q&A targeted at its users. To illustrate the benefits Apple claims the change will offer to users, the document describes in detail a typical scenario where a father and daughter would have data about them tracked and updated while doing normal, everyday things in the current digital ecosystem.

Apple’s document goes on to explain Apple’s stated philosophy on user data protection and privacy, and it announces the release window for this upcoming change. The document explains the change this way:

App Tracking Transparency will require apps to get the user’s permission before tracking their data across apps or websites owned by other companies. Under settings, users will be able to see which apps have requested permission to track so they can make changes as they see fit.

Apple also provided an FAQ about the feature. Among other things, it clarifies that app developers will not be able to require users to allow tracking in order for those users to gain access to the “full capabilities” of the app.

Apple first announced these plans at its developer conference last June, and at that time, it intended to launch the feature alongside iOS 14 and the iPhone 12. But in September, Apple delayed implementation and enforcement of this new tracking policy until 2021 in order to give businesses and apps dependent on advertising more time to manage the transition.

A mockup of the tracking confirmation that Apple included in its company blog. Note that it uses Facebook as its example.

The company’s move to introduce this feature has opened the floodgates to criticism from marketers and other tech companies and may have made the company somewhat more vulnerable to antitrust investigations.

Apple’s initial announcement was praised by privacy advocates and nonprofits but publicly scorned by many ad networks. It also drew direct criticism from Facebook, whose competitive advantage in the advertising space (its primary revenue source) is built on tracking techniques like this.

In response to Apple’s move, Facebook bought full-page newspaper ads that claimed that the change would hurt small businesses, and Facebook tried to position itself as a supporter of those businesses. The ad read:

Apple’s change will limit their ability to run personalized ads. To make ends meet, many will have to start charging you subscription fees or adding more in-app purchases, making the internet much more expensive and reducing high-quality free content.

Beyond hurting apps and websites, many in the small business community say this change will be devastating for them too, at a time when they face enormous challenges. They need to be able to effectively reach the people most interested in their products and services to grow.

Forty-four percent of small to medium businesses started or increased their usage of personalized ads on social media during the pandemic, according to a new Deloitte study. Without personalized ads, Facebook data shows that the average small business advertiser stands to see a cut of over 60% in their sales for every dollar they spend.

Small businesses deserve to be heard. We’re standing up to Apple for our small business customers and our communities.

During its most recent quarterly earnings report, Facebook announced that it saw $11 billion in profit over the quarter, driven in part by a 22 percent increase in advertising revenue to more than $28 billion. This occurred during a time when most businesses that depend on advertising that isn’t delivered through Facebook struggled to survive—like news organizations, for example. (Apple also had an enormously profitable quarter, primarily from direct sales of products rather than advertising.)

Facebook has outplayed publishers and most other advertising-based businesses (except search giant Google) to achieve dominance of the ad market by relying on this personal-data tracking and targeting approach and by leveraging users’ dependence on Facebook to connect with friends, family, businesses, communities, and the news.

Facebook used that earnings report to lambaste Apple, as the social media company warned investors that the aforementioned iOS policy shift will hamper the company’s ability to leverage that ad targeting advantage, leading to less impressive revenues in coming quarters. Facebook CEO Mark Zuckerberg began framing the battle in terms of competition between the two companies, saying that Apple is now one of Facebook’s biggest direct competitors.

While Apple has an advertising business that competes with Facebook in some ways, it’s tiny by comparison, and Apple’s business model is generally not centered on advertising. But Zuckerberg claims that, among other things, Apple is aiming to lead its iMessage service to beat Facebook’s Messenger and WhatsApp in the market. It’s “a key linchpin of the ecosystem,” he said, noting that “it comes pre-installed on every iPhone and they preference it with private APIs and permissions.”

Zuckerberg’s tack here reflects that of Epic Games, Spotify, and other companies that have recently challenged Apple’s tight grip on the policies and revenue moving through its own App Store on the devices it makes, markets, and sells—as well as nascent antitrust investigations of Apple in both the United States and the European Union.

“Apple has every incentive to use their dominant platform position to interfere with how our apps and other apps work, which they regularly do to preference their own,” said Zuckerberg. Further, Zuckerberg believes that Apple and Facebook will become more direct competitors in what both he and Cook say they believe is “the next computing platform”—augmented reality.

A new report in The Information today further fleshes out Facebook’s potential strategy. The Information’s sources say that Facebook has been working for several months to build a legal case challenging Apple’s control of its App Store and that it has also assisted the US Department of Justice antitrust investigation into how Apple manages the iOS App Store. (Facebook itself has also recently been the subject of antitrust investigations and lawsuits.)

The lawsuit would build on Zuckerberg’s claim about competition in messaging apps above, but it would also cover the IDFA change. The article says Facebook’s planned argument is that Apple’s requirement that apps disclose and gain user consent for IDFA tracking unfairly advantages Apple’s own apps to the detriment of third-party apps, because “that obstacle will not apply to Apple’s own apps”—though it’s worth noting here that Apple’s apps don’t use IDFA tracking to begin with.

Four of the report’s sources say that Facebook leadership has faced resistance to this plan from the company’s own employees, who “are concerned that Facebook is not a compelling victim.” Facebook has not yet committed to going through with the lawsuit.

This ongoing feud has split much of the tech industry into loose allegiances, though many players are still sitting on the sidelines. Groups that have publicly supported Apple include the Mozilla Foundation and numerous consumer-privacy advocacy groups, while several ad networks have backed Facebook.

Google stands to lose a lot from Apple’s iOS change, too. But Google has avoided attacking Apple on this point directly and publicly. It has, however, written an update to developers saying that it will stop using IDFAs in its iOS apps so as to keep its apps on the App Store while avoiding presenting users with the privacy prompt at all. It also said that apps should expect to see reduced revenue from Google ad services on iOS after the change occurs.

The search giant competes with Apple in the smartphone space, but it also competes with Facebook in its core business of targeted advertising, and it has app stores of its own on which it likely wishes to maintain its own grip.

What’s next from Apple

In the wake of Zuckerberg’s comments and Apple’s announcement about IDFA, Apple CEO Tim Cook delivered a keynote speech at a data-privacy conference today.

Cook used the conference as a way to establish Apple’s posture for the fight, just as Zuckerberg used Facebook’s quarterly investor call. While Cook did not attack Facebook by name, it was clear who his comments were referring to, and they were scathing.

From one part of the speech:

If a business is built on misleading users, on data exploitation, on choices that are no choices at all, then it does not deserve our praise. It deserves reform.

We should not look away from the bigger picture. At a moment of rampant disinformation and conspiracy theories juiced by algorithms, we can no longer turn a blind eye to a theory of technology that says all engagement is good engagement—the longer the better—and all with the goal of collecting as much data as possible.

Too many are still asking the question, “How much can we get away with?” when they need to be asking, “What are the consequences?”

It is long past time to stop pretending that this approach doesn’t come with a cost—of polarization, of lost trust and, yes, of violence. A social dilemma cannot be allowed to become a social catastrophe.

Apple will move ahead with the IDFA change—first in the next beta release of iOS, and then publicly in the spring. It will do so as it faces a potential lawsuit from Facebook and ongoing antitrust lawsuits, investigations, and scrutiny.

But amidst all that, the battle Apple and Cook are waging with Facebook and Zuckerberg is a battle for public opinion and sentiment.

It’s unclear at this stage which side of this issue has an advantage on that front in the long run—Facebook is consistently named as one of the most hated companies in the United States, but investigations into actual user preference and behavior suggest that Apple may be overestimating users’ sensitivities around privacy.

Studies and surveys have found that, while a significant majority of users say they care about privacy, most of those users say they would rather give it up than pay more upfront for software and services, for example. Users don’t want to be the product being sold—but they don’t want to buy a product either, and most seem to see becoming a product as the lesser evil compared to footing any part of the bill from their own pockets.

Alongside the outcomes of lawsuits and regulatory actions, whether those users’ attitudes and habits can be swayed may be major factors in how this dispute plays out.