Intel’s first discrete GPU in 20+ years is only for OEMs, integrators 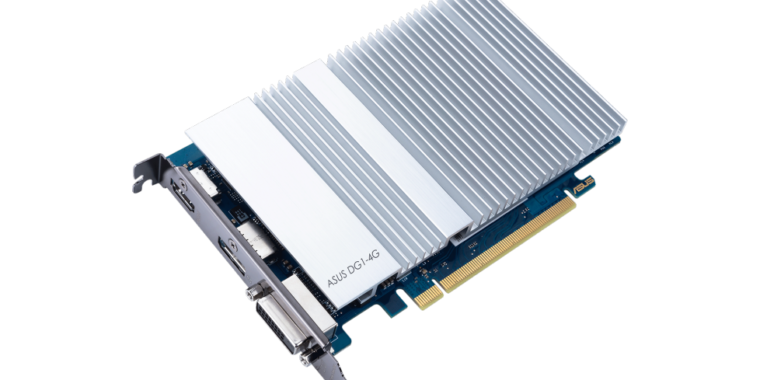 This Asus-branded version of the DG1 is passively cooled—which should give you a hint where the DG1 sits in terms of raw GPU performance.

Here at Ars, we’ve been talking about Intel’s eventual run at the desktop graphics market for a while now. (Technically, this is Intel’s second run—it made a short-lived and unloved AGP-only graphics card, the i740, in 1998.)

This week, Intel announced sales of Intel DG1 graphics cards to OEMs and system integrators for inclusion in prebuilt systems. So far, two variants of the DG1 have been at least partially announced—an Asus-branded, passively cooled card and an actively cooled version from an unannounced vendor.

If you’re hoping to score a gray-market DG1 and include it in a home-built system of your own, you’re out of luck. Intel told LegitReviews that DG1 cards will work only on very specific systems, with custom UEFI (BIOS) that supports the card:

The Iris Xe discrete add-in card will be paired with 9th gen (Coffee Lake-S) and 10th gen (Comet Lake-S) Intel® Core™ desktop processors and Intel(R) B460, H410, B365, and H310C chipset-based motherboards and sold as part of pre-built systems. These motherboards require a special BIOS that supports Intel Iris Xe, so the cards won’t be compatible with other systems.

While this is disappointing news for reviewers like yours truly, it’s probably not anything to get upset about if you’re an enthusiast looking for the next hot gaming GPU. If we assume that May 2020’s leaked DG1 Fire Strike benchmarks are still accurate, it won’t get close to breaking any records yet.

With a Fire Strike of 5,538, the Intel DG1 dev card from that May leak is faster than onboard graphics—but it’s slower than entry-level discrete GPUs from AMD (RX 560) and Nvidia (GTX 1050), and it isn’t even close to being on par with higher-end gaming GPUs. Of course, those leaked benchmarks were on a development version of the DG1, and it’s possible that the newly launched OEM version will be faster—but we don’t actually expect that to be the case.

The OEM version might even be slower in hardware than the dev version was—the new OEM versions offer 80 Execution Units (EUs), while at least some versions of the dev cards sported 96. Improvements in driver quality over the last eight months are more likely to make a positive impact on performance, but we doubt it will change the card’s ultimate place in the market—the DG2 may be a different story entirely, but DG1 seems fated to drive relatively cheap desktops without heavy gaming focus.

On the gripping hand, if Intel (and its partners) can actually produce the DG1 in significant volume and on time, it could end up being a smash hit with OEMs despite mediocre performance—Nvidia’s GTX 1050 and AMD’s RX 560 are faster if you actually have them, but they’re difficult to source. The GTX 1050 should be a $110 card—but we couldn’t find a new GTX 1050 today on Amazon for under $300 or on Newegg for under $180.

Both launched versions of the DG1 card feature 4GB LPDDR4X, support PCIe 4 (despite no Intel CPUs supporting it yet), and offer HDMI, DisplayPort, and dual-link DVI-D outputs with support for up to three simultaneous 4K displays.

We expect to see the DG1 cards show up in OEMs’ value-oriented desktop lineup later in 2021.