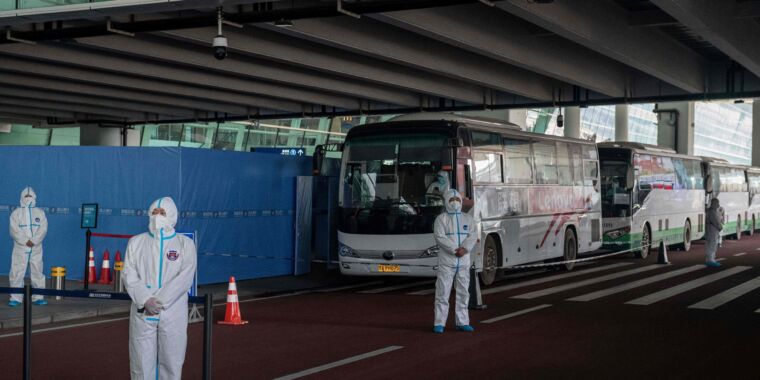 Chinese authorities have held up two scientists sent to Wuhan, China, by the World Health Organization to investigate the origins of the novel coronavirus—yet another obstacle the Chinese government has thrown at the health agency’s efforts to understand how the devastating pandemic began.

The two scientists were traveling as part of an international team of 15 that has long been working to gain access to the city where the virus first emerged in late 2019. Thirteen of the scientists—who all repeatedly tested negative for the coronavirus, SARS-CoV-2, in their home countries—were allowed to travel on. They have now arrived in Wuhan, the WHO said on Twitter earlier today. However, China is still requiring the 13 scientists to undergo a 14-day quarantine in Wuhan.

The two scientists held back also tested negative for the virus multiple times prior to traveling. But while in Singapore en route to Wuhan, they tested positive for SARS-CoV-2 antibodies, suggesting past exposure to the virus. Despite their negative PCR tests, Chinese authorities had them remain in Singapore for additional testing.

On its own, the holdup of two scientists may seem like a minor travel snag. But it’s just the latest obstacle in the scientific effort to study how SARS-CoV-2 jumped from animals to humans.

Last year, China dismissed requests from Australia, the US, and other countries to let independent scientific investigators have access to Wuhan to study the origins of the virus. In July, the Chinese government allowed two WHO investigators into the country for three weeks to “lay the groundwork for an investigation into the source of the virus.” However, the two investigators were not permitted to visit Wuhan at any point in their stay.

Earlier this month, the larger WHO team had planned to set out on a trip to Wuhan, only to have their plans cancelled at the last minute. The team’s trip was based on “arrangements jointly developed between WHO, the Chinese government, and countries for which the team was meant to travel through on their way to Wuhan,” WHO Director-General Tedros Adhanom Ghebreyesus said in a January 5 press briefing. But “today we learned that Chinese officials have not yet finalized the necessary permissions for the team’s arrival in China. I am very disappointed with this news given that two members had already begun their journeys and others were not able to travel at the last minute.”

China is apparently wary of refreshing criticism and scrutiny of its early handling of the pandemic. However, its continual effort to hamper the investigation will likely only fuel the persistent suggestions that SARS-CoV-2 escaped from a Chinese lab. Though it’s difficult to entirely rule out the possibility, the evidence used to support the lab-escape ideas are circumstantial at best and wild speculation at worst.

Coronavirus experts have long and repeatedly argued that the far more likely cause of the pandemic was the virus jumping species into humans, as was seen with other outbreak-causing coronaviruses. In addition, independent researchers say there are no telltale signs of human tinkering in SARS-CoV-2’s genetic blueprints.