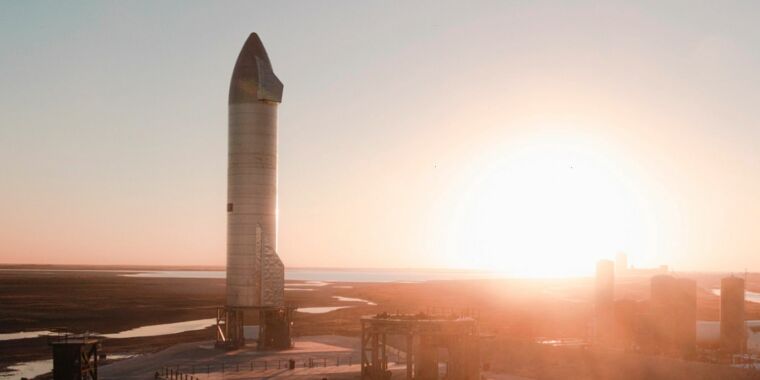 Update, 5:15pm EST Thursday: There will be no Starship prototype launch attempt on Thursday, as residents were recently told they could return to Boca Chica Village. Will SpaceX receive approval from the Federal Aviation Administration to launch on Friday? Will the vehicle actually launch? All we really know right now is that the weather looks fine, should SpaceX get a green light to go.

Earlier this afternoon, SpaceX did load propellent onto Starship, and the company got pretty deep into the countdown. It seems most probable the company was hoping to get a last-minute approval from the FAA, which did not come.

Update, 3pm EST Thursday: SpaceX is loading its Starship SN9 prototype with propellant on Thursday afternoon. That much we know. But whether this is for a “wet dress rehearsal,” a static fire test, or an actual launch, who knows.

After the FAA said Thursday’s launch was canceled at 11am local time, SpaceX founder Elon Musk replied with the following unhappy tweet:

Unlike its aircraft division, which is fine, the FAA space division has a fundamentally broken regulatory structure.

Their rules are meant for a handful of expendable launches per year from a few government facilities. Under those rules, humanity will never get to Mars.

Then a couple of sources suggested that Musk and the FAA were working to try and get final approval for a launch on Thursday before the window closed at 6pm CST (24:00 UTC) in South Texas. New Temporary Flight Restrictions have not been put in place, but propellant is being loaded. So we really don’t know what to expect. Stay tuned.

Update, 12:30pm EST Thursday: A little before 11am local time on Thursday (17:00 UTC), the “Temporary Flight Restrictions” for the day’s Starship prototype launch were canceled. It is not clear why SpaceX and the Federal Aviation Administration called off the attempt, as engineers and technicians had been preparing the vehicle for a launch. Local residents were also evacuated.

It is possible the launch was delayed due to winds, which were gusting above 20mph near the launch site, or because the FAA did not grant final approval for the 10km launch attempt. Temporary Flight Restrictions are also in place for Friday, which is now the earliest possible time the vehicle could take flight. Weather should be more benign for SN9 on Friday.

Update, 8:00am EST Thursday: Today appears to be the day that SpaceX will attempt to launch its latest Starship prototype—Serial No. 9, or SN9. The goal is to fly the vehicle to about 10km, demonstrate a controlled descent using the vehicle’s body flaps, and then reorient Starship so that it makes a vertical landing. The last Starship prototype flight attempt, in December, made a fiery landing after a propellant tank pressurization issue.

The launch window for Thursday’s test attempt runs from 9am local time in South Texas to 6pm (15:00 UTC to 24:00 UTC). The company has issued evacuation notices to local residents, and weather should be favorable at the launch site along the lower Texas coast. As of late Wednesday night, SpaceX had not yet received final approval from the Federal Aviation Administration, but the company’s ongoing preparations indicate it is expected today.

A webcast of the launch will be embedded into this post when SpaceX goes live with it.

Update, 3:40pm EST Monday: SpaceX began preparations for a launch on Monday and closed roads leading to the pad in South Texas. However, the company ended up not evacuating local residents, indicating there would be no launch attempt on January 25. It is possible that winds at the launch site were too high—gusts near 30mph at the surface were noted.

This now means the company is likely to try again on Tuesday or Wednesday, when roads are scheduled to be closed from 8am to 5pm local time (18:00-23:00 UTC). Winds are forecast to be more favorable at that time.

After a series of static fire tests on its latest Starship prototype, SpaceX appears set to launch the full-scale vehicle as early as Monday afternoon from its rocket facility in South Texas. The nominal plan is for the prototype to ascend to an altitude as high as 12.5km, perform a “belly flop” maneuver to simulate bleeding off energy during a return through Earth’s atmosphere, reorient itself, and land near the launch pad.

Only a little more than six weeks have passed since SpaceX conducted a similar test of the SN8 vehicle in South Texas. That flight test went splendidly up until near the end of its flight. However, due to a pressure failure in a fuel tank at the top of the vehicle, the vehicle’s Raptor engines were deprived of the fuel needed to make a soft landing.

So the vehicle made a spectacular crash landing into the pad.

Fortunately, the wreckage was soon cleared away. And in its nearby factory, SpaceX had the SN9 vehicle almost ready to go. It might have moved to the launch pad sooner, but in mid-December the SN9 prototype leaned over, falling into the wall of its high bay. This necessitated several days of checkouts and flap replacements. Then there were issues with the Raptor engines that were discovered across several static fire attempts. All of this and more required intensive work to ready SN9 for its flight.

Sources have said SpaceX is eager to get SN9 into the sky because SN10 itself is nearly ready to stretch its wings. We can probably expect that vehicle to be moved down the road to the launch site within days of SN9’s flight, regardless of the outcome. Testing often to find the bugs is one feature of a hardware-rich program like the one SpaceX is using to develop Starship.

The six-hour launch window for Monday’s test extends from noon local time (18:00 UTC) to 6pm (24:00 UTC). As with previous tests, a technical issue may cause the test campaign to abort its launch attempt at any point. Should they be needed, SpaceX has backup launch opportunities on Tuesday and Wednesday, although weather conditions appear to be more favorable for Tuesday.