This painted pig is the world’s oldest figurative art 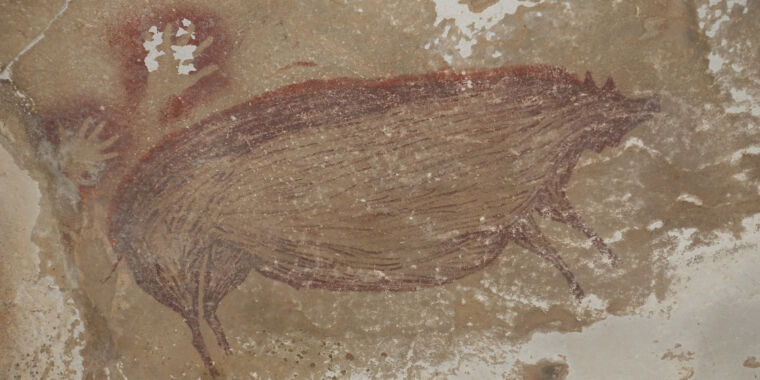 A pig painted on the wall of an Indonesian cave is the world’s oldest figurative art—that is, it’s the oldest known drawing of something, rather than an abstract design or a stencil.

The 45,500-year-old ocher painting depicts a Sulawesi warty pig, which appears to be watching a standoff between two other pigs. If that interpretation is correct, the painting is also a contender for the world’s oldest narrative scene. And it hints at how much the earliest Indonesians observed and recorded about the animals and ecosystems around them. A growing pile of evidence tells us that the first people to reach the islands of Indonesia carried with them a culture of art and visual storytelling, as well as the means to cross the expanses of water between the islands, eventually reaching Australia.

Griffith University archaeologist Adam Brumm and his colleagues used uranium-series dating to measure the age of a mineral deposit that had formed above one of the pig’s rear feet. As water flows through a limestone cave, it leaves behind small deposits of minerals, which gradually build up into layers of calcite, like the one atop the pig painting. The minerals in the water contain trace amounts of uranium, which gradually decays into different uranium isotopes and eventually into a completely different element, thorium. By measuring the amounts of uranium-234 and thorium-230 in a cave deposit (also called a speleothem) and then comparing that to the local groundwater, archaeologists can measure how long ago the speleothem formed.

In this case, the result suggests that someone painted the pigs on the rear wall of Liang Tedongnge (a cave on the Indonesian island of Sulawesi) at least 45,500 years ago.

That means the Liang Tedongnge painting breaks the record for oldest known figurative art, although not by much. The previous contenders were a 43,900-year-old painting in Liang Bulu’Sipong 4 on Sulawesi and a 40,000-year-old painting from Lubang Jeriji Saleh cave on Borneo. The Borneo painting showed an unidentifiable animal with a spear in its side (blame erosion, not the artist, for the confusion). And the Liang Bulu’Sipong 4 painting showed a group of humanlike—but definitely not quite human—hunters facing off against a much larger water buffalo, or anoa, and another Sulawesi warty pig.

The wild pigs seem to have been favorite subjects for Pleistocene Indonesian painters. Based on the art they left behind in at least 300 caves in southern Sulawesi alone, those ancient artists had a distinctive style. They worked in red or purple ocher, drawing simple outlines of their subjects as seen from the side. Those outlines were usually filled in by irregular painted lines and dashes, and they rarely showed any anatomic details like eyes, ears, genitals, or markings.

When did people first arrive in Indonesia?

The uranium-series dating at Liang Tedongnge only provides a minimum age for the pig; it could technically be even older. At nearby Liang Balangajia 1, Brumm and his colleagues dated another pig painted on the ceiling of a small side chamber in the cave. That one was at least 32,000 years old. But this time, the archaeologists also managed to date a layer of the cave wall just beneath the pigment. The result of that testing suggests that the Liang Bangajia 1 painting could be up to 73,400 years old—or anywhere in the 40,000 years between.

That time bracket probably also fits the Leang Tedongnge painting, and it lines up well with what other archaeological evidence suggests about the first voyagers to reach Indonesia and start painting cave walls.

But the cave paintings are the oldest actual evidence of human occupation on Indonesia’s islands. Excavations in the Lesser Sunda islands, which lie south of Sulawesi (and include Flores, home of our diminutive extinct cousin Homo floresiensis) turned up stone tools and other signs of human presence dating to around 44,600 years ago, around the same age as the cave paintings on Sulawesi and Borneo.

What we know for certain is that human history on these islands is longer than we can easily comprehend at first glance. We’re closer in time to the artist who painted the Liang Tedongnge pig than that artist was to the hominins who left the oldest tools on the island. Stone tools and animal remains between 194,000 and 118,000 years old were left behind by other hominin species, now extinct; we don’t yet know if those long-vanished cousins were more like Denisovans or Homo erectus (or perhaps like Homo floresiensis), both of which spread across Asia long before our species.

And 4,000 years ago, around the time people in Sumer and Egypt were first developing writing systems, a new group of people arrived in the islands of what is now Indonesia. They left their own artwork, in their own distinctive style, in the caves dotting the islands, sometimes atop the much, much older work of their predecessors.

It’s fascinating to imagine those early farmers pondering the art of the first humans to reach the islands—or the very first Indonesian artists finding those earlier hominin artifacts.