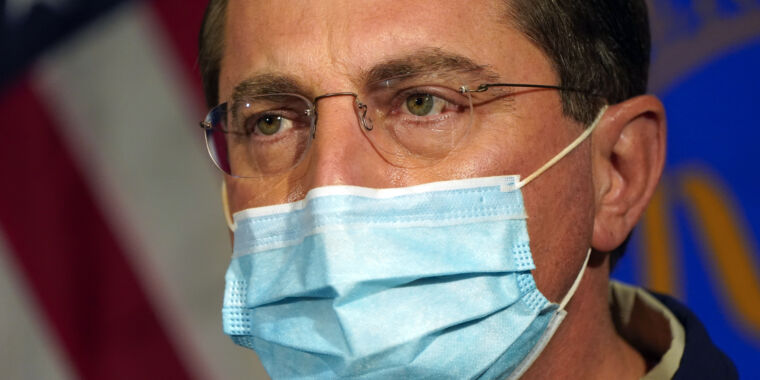 Warp Speed officials said in a Tuesday press briefing that they will now increase the number of doses available to states and jurisdictions, ditching the current strategy of holding back half of available doses to reserve them for the second round of the two-dose immunizations. Members of Biden’s transition team announced a similar plan last week, saying that the president-elect “supports releasing available doses immediately and believes the government should stop holding back vaccine supply so we can get more shots in Americans’ arms now.”

When asked if Warp Speed officials had discussed the plan with Biden’s team—which will take over next week—Health and Human Services Secretary Alex Azar said that they had not. “We at the Operation Warp Speed board made the determination” to make the changes, Azar said. He also repeatedly emphasized that changing the board’s plans was always part of its members’ intentions.

“While we will certainly brief the Biden team on those changes, we operate, as you know, with one government at a time,” Azar told reporters.

In addition to releasing more vaccine doses, Azar also said that he and his colleagues will tell states to expand the groups eligible to receive vaccines. Specifically, they will now tell states to open vaccination to everyone age 65 and over and people under age 65 who have a documented underlying medical condition that makes them more vulnerable to COVID-19.

This is a significant shift in recommendations to states, which ditches nuanced prioritization schemes laid out by expert public health panels, including the Centers for Disease Control and Prevention’s Advisory Committee on Immunization Practices. The change is also likely to generate criticism, given the large size of these groups and the breakdown of prioritization. But Secretary Azar seemed to justify the shift, citing the slow rollout so far—which he entirely blamed on states.

According to CDC data, nearly 28 million COVID-19 vaccine doses have been distributed to states and jurisdictions, but only 9.3 million people have reportedly received their first dose.

“In some states, heavy-handed micromanagement of this process has stood in the way of vaccines reaching a broader swath of the vulnerable population more quickly,” Azar said. He, at another point, said some governors had “over-reacted” to prioritization recommendations.

Azar went on to say it was never the federal government’s intention that states should hold off vaccinating certain vulnerable people until all members of higher-priority groups were vaccinated. Many federal officials—including CDC Director Robert Redfield, who also spoke at today’s briefing—have echoed that point, advising state officials to vaccinate as many people as possible, even if it means abandoning prioritization to use up every vaccine dose in the refrigerator.

However, as Redfield pointed out in several instances today, the sluggish vaccine rollout may not actually be as sluggish as it seems. Some of the vaccination numbers reported to the CDC may suffer from significant reporting lags. Health providers in the past have had 30 days to report vaccination numbers to the CDC—not the current reporting turnaround of just 72 hours. Additionally, interoperability problems have prevented timely reporting from some providers.

“I do think a lot of it is reporting,” Redfield said of the slow vaccination progress. However, the CDC is now conducting a “deep dive” to really understand what the problems are in each jurisdiction.

Still, to try to overcome those unknown barriers to vaccination, Azar said Warp Speed will also be telling states to set up new vaccination locations, such as at pharmacies, community health centers, and mass vaccination sites.

Last, Azar said they will change how doses are allocated to individual states. Currently, each state has access to an allotment of vaccine that’s based on the state’s population. Moving forward, state allotments will be “based on the pace of administration as reported by states and by the size of the 65 and over population in each state,” Azar said.

The plan to base allotments on the size of each state’s vulnerable population actually fits with Operation Warp Speed’s initial plan. But, those plans were changed at the last minute to “keep things simple.”

“If you’re not using vaccine that you have the right to, then we should be rebalancing to states that are using that vaccine. It is common sense,” Azar said. “We want to give notice,” he added—referencing the reporting issued discussed earlier—”so, get your data in order.”

According to Azar, the government is giving states two-weeks’ notice before the new allotment strategy would come into effect. However, with the Biden administration coming into office next week, it’s unclear if this change will come into effect at all.