January 9, 2021 by arstechnica No Comments 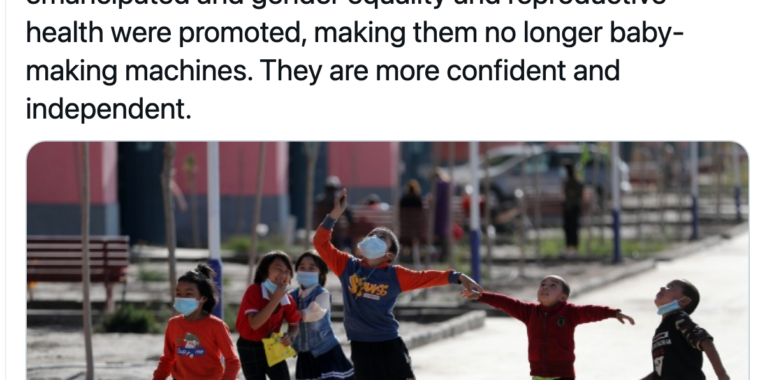 On Thursday evening, I wrote about a tweet by the Chinese government’s US embassy praising China’s treatment of its Uighur minority. According to the tweet, China was in the process of “eradicating extremism” among the Uighurs, which the government claimed had “emancipated” Uighur women. “Gender equality and reproductive health were promoted, making them no longer baby-making machines,” the embassy claimed.

“After further review we have taken action on this Tweet for violating our rules against dehumanization,” a Twitter spokeswoman told Ars on Friday evening. “We prohibit the dehumanization of a group of people based on” their religion, race, or ethnicity, among other categories.

Human rights advocates have described China’s treatment of the Uighurs as a demographic genocide. According to the Associated Press, the Chinese government “regularly subjects minority women to pregnancy checks, and forces intrauterine devices, sterilization and even abortion on hundreds of thousands” of women in the Xinjiang region.

Women who resist these birth control measures or have more than the approved number of children are sent to detention camps, according to the AP. “Police raid homes, terrifying parents as they search for hidden children.”