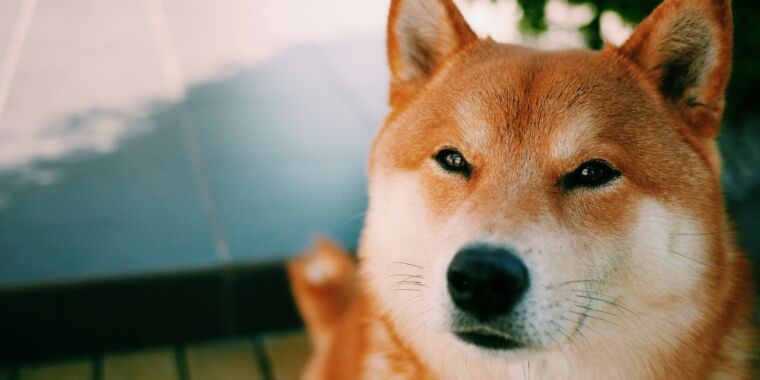 Dogecoin—the cryptocurrency based on a meme about an over-enthusiastic Shiba Inu dog—reached an all-time record price of 4 cents on Thursday evening. That represents an incredible fivefold increase over the preceding 24 hours. The cryptocurrency was trading for less than a penny on Wednesday evening.

Dogecoin’s rally appears to be connected to the WallStreetBets phenomenon. The subreddit WallStreetBets has been the nerve center of an online movement to pump up the value of GameStop and a handful of other stocks in an effort to bankrupt hedge funds that had taken big short positions in the stocks. GameStop’s value has risen nearly fivefold since the start of the week—and more than sixtyfold since last summer.

On Saturday morning, a Twitter account called WSB Chairman (which isn’t officially associated with the WallStreetBets subreddit) tweeted: “has Doge ever been to a dollar?” The answer to that question is “no,” but some members of the WSB community apparently decided to try to change that.

Dogecoin is a particularly inspired way for the WallStreetBets community to jump into the cryptocurrency world. While a lot of bitcoin and ethereum fans are earnest hackers trying to change the world, dogecoin has been a meme-driven joke from the beginning. Dogecoin gained prominence largely because the concept was so ridiculous that it was fun to write about. And as more people wrote about it, it attracted new converts who bid the price still higher.

That process last peaked in early 2018, when dogecoin reached a high of almost 2 cents before crashing along with the rest of the cryptocurrency market. By early 2019, dogecoin had lost almost 90 percent of its value and was trading for a fraction of a penny. It has languished in obscurity over the last two years.

It’s fitting that the first cryptocurrency to see a big impact from the WallStreetBets craze is dogecoin, arguably the first asset to have its value pushed up by the sheer force of social media enthusiasm.