What I learned playing 30+ years’ worth of Jeopardy! video games

January 8, 2021 by arstechnica No Comments 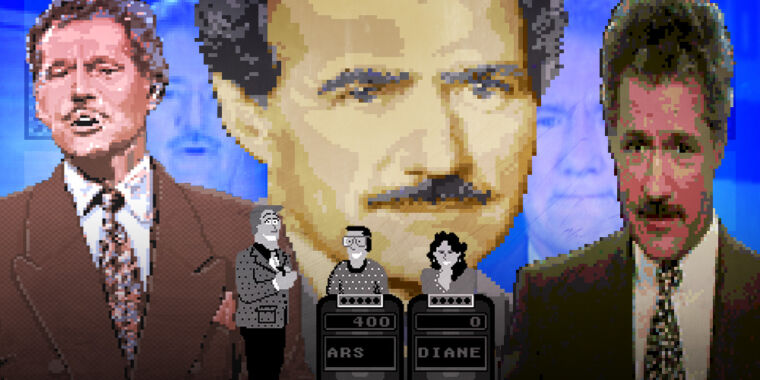 Friday, January 8, 2021, marks the end of an era for American television. That’s when TV stations around the country air the final episode of Jeopardy! featuring Alex Trebek as host. Since relaunching Jeopardy! as a syndicated game show in 1984, Trebek emceed thousands of episodes until just before his death from cancer in November.

Accordingly, Friday may also mark the end of an era for one of video gaming’s most enduring franchises (and for Trebek as an enduring digital gaming personality rivaling football’s John Madden). Since the first PC releases of Jeopardy! in 1987, there have been more than 40 distinct video game versions of the quiz show released across at least 27 different platforms (that includes “Sports Edition” spin-offs and the like). That’s an impressive run that spans the space between the Apple II and the PlayStation 5, crossing on the way into curiosities like the CD-i, Tiger Game.com, Google Assistant, and Facebook (the last of which is no longer available to play in any form but is still captured in contemporary coverage).

It’s rare for a single gaming brand to encompass so much of gaming’s short history. That’s especially true for a licensed brand that’s not controlled by a single company—GameTek, Rare, Hasbro, Atari, Sony, THQ, and Ubisoft have all been attached to Jeopardy! games over the years. It’s even odder to see an enduring video game franchise where the basic answer-and-question gameplay remains almost entirely unchanged over a three-plus-decade span (though some developers have done their best to tinker at the margins).

To mark the end of the Alex Trebek era, I’ve spent the past few weeks playing and examining as many Jeopardy! video games as I could. The result has been a fascinating trip through video game history and an interesting encapsulation of how video game technology and design have evolved over 30+ years.

And now, here is the host of Jeopardy…

Believe it or not, Alex Trebek’s comforting face wasn’t always a part of video game Jeopardy! The very first versions of the game in the late ’80s appeared on the Apple II, Commodore 64, MS-DOS, and NES without an on-screen host at all. Instead, the presentation focused on the contestant avatars and the screen-filling question board.

It’s not until 1991’s Super Jeopardy! that publisher GameTek bothered to add an on-screen host at all. But even then, the developers eschewed Trebek in favor of an unnamed, big-headed, square-chinned host with a huge, goofy grin. I’ve taken to referring to this Trebek replacement (and his twin appearing in the Game Boy versions through 1996) as Guy Smiley, after the excitable muppet he resembles.

Trebek would have to wait for the 16-bit era for his digital debut, when he was finally rendered as full-screen pixel art with extremely limited animation (this was also the first time he appeared on video game box art). Both the SNES and Genesis versions even feature identifiable digitized speech samples of Alex saying things like, “Here are the categories,” or “You are correct” or “Sorry…”

Considering the small size (and large cost) of game cartridge memory in those days, those speech samples were a significant indulgence from the developers. Even the tiny Game Gear version continued the tradition with a few surprisingly coherent digitized speech samples.

The mid-’90s start of the CD-ROM era would bring even greater amounts of Trebek into our virtual lives. Both the Sega CD and CD-i versions of the game featured a very grainy digitized video of Alex walking onto the stage and welcoming us with a “Let’s play Jeopardy!” The expanded CD storage also meant a lot more of Alex’s voice, with short loading pauses prefacing phrases like, “For $300, here is the clue,” or “For game rules, select Help!” (it’s truly a wonder that last one never became his catch phrase).

In the CD-i version, you can even hear Alex address you by name… if your name happens to be among hundreds of canned recorded selections. Reading all those names must have been a fun recording session for Trebek in the ‘90s.

In the new millennium, digital Trebek would continue to change with the times. On the PS2, he appeared in full-screen DVD-quality video for the first time in a game. On the Wii and Nintendo DS, he appeared as a big-headed Mii-like avatar, aping the popular style of the time. On the Xbox 360, he resembled the system’s gaunt, cartoony “Avatars” (remember those?).

Starting with the Wii version, Alex also started reading the thousands of clues included in the game (announcer Johnny Gilbert or a sound-alike read clues in many previous CD-ROM editions). That was an important addition that helped digital Jeopardy! hew more closely to the pace and feeling of the TV show’s presentation.

Converting the game show basics of Jeopardy! into a video game probably seems simple, right? Just present the clue (aka “the answer”) on screen and ask the player to provide the response (aka “the question”), right? In practice, though, there are dozens of little gameplay and presentation decisions that affect how a digital game of Jeopardy! has worked over the years.

How do you represent the human players and/or computer opponents onscreen, for instance? Most versions of the game allow you to select from six to 10 different avatars, from cartoony drawings on the NES to black-and-white digitized photo horrors on the Game.com. But some versions (CD-i, Playstation/PS2, PS4/Xbox 360/Switch) don’t feature any player avatars at all. Others, like the Wii and Nintendo DS, offer full-fledged Mii-style character creators for practically endless variety.

The canned avatar options usually present a decent variety of skin tones, ages, clothing, and male/female options available to choose from. The one exception is the Game Gear version, which for some reason only offers pasty, white avatars (and before you suggest it, other versions managed more onscreen diversity with much more limited hardware color palettes).

Early Jeopardy! games seemed really enamored with these avatars, to the point where they’d pause the proceedings for upwards of seven seconds for a canned animation after a player buzzed in or gave a response. This perhaps reached its apex on the Sega CD, where the onscreen avatars repeat the same five-second canned video loops to accept unseen applause (or hang their heads to sad “awwws” from the audience) after every response.

Text entry becomes an issue once you move away from the PC keyboard and into the console space. The makers of video game Jeopardy! can’t seem to agree on the best way to show an on-screen keyboard (OSK)—options range from the Game.com’s full QWERTY setup to a single horizontal alphabetical line on the SNES and PlayStation 2. Regardless of the layout, clicking through an onscreen keyboard is a laborious and time-intensive process, made worse in many versions by slow controller response times and annoying “clicky” sound effects.