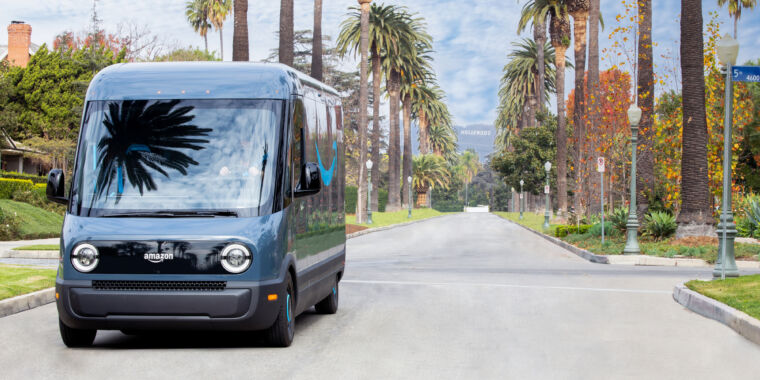 A year and a half after Amazon announced that it would buy 100,000 electric trucks to reduce its carbon footprint, Amazon says it has begun using prototype vehicles for real-world deliveries in Los Angeles. Amazon expects to spend a few more months testing the vehicles before the start of mass production later this year.

Amazon placed the massive order with Rivian, a startup that has raised billions of dollars to build electric trucks. Amazon is a Rivian investor.

Rivian has designed a “skateboard” electric truck platform that can be used to build a wide variety of vehicles. Rivian is aiming to begin deliveries of its flagship pickup truck, the R1T, and the R1S SUV later this year.

“Last-mile” delivery trucks are a good application for electric vehicles because trucks tend to drive a relatively short distance with a lot of stopping and starting. Amazon says the new Rivian delivery trucks have a range of 150 miles. Amazon says that it has “started getting its buildings ready to accommodate the new fleet of vehicles and has installed thousands of electric vehicle charging stations at its delivery stations across North America and Europe.”

The purchase of the electric trucks is part of Amazon’s overall project to reach net zero carbon emissions by 2040. Amazon is aiming to use 80 percent renewable energy by 2024 and 100 percent by 2030. The company wants to have 10,000 electric delivery trucks on the road next year. In 2019, Amazon CEO Jeff Bezos said he hoped to have all 100,000 Rivian vehicles on the roads by 2024.

Because electric motors are so quiet, regulations require electric vehicles to make an artificial sound when they are moving at low speeds. People who have seen Amazon’s new trucks in the wild report that they make a futuristic sound that’s loud and irritating—though that may change with future versions of the vehicle.