As Virgin Galactic gets swept up in GameStop mania, it gets back to flying 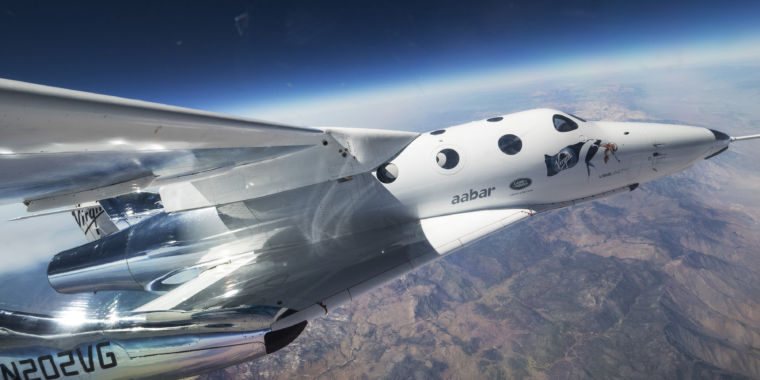 At a time when non-traditional investors are buying up heavily shorted stocks like GameStop and AMC Networks, the hunt is on to find other targets among the most-shorted stocks in the market.

Among those stocks is Virgin Galactic, which has a “short percent of float” of about 70 percent. This means that institutional traders have shorted about 70 percent of the shares of stock that are available for public trading. This is a big bet by investors that the company will fail.

In the year or so since it joined the New York Stock Exchange as SPCE, Virgin Galactic has typically traded at between $15 and $25 a share. This last week it spiked to $58.65 and has remained comfortably above $40 since then in trading attributed to shorted stock-buying mania.

Virgin Galactic—which is developing a series of space planes to take tourists on short suborbital flights above 80km—stands out among the list of most-shorted stocks. Most of these businesses, such as GameStop, Bed Bath & Beyond, and The Children’s Place, are longstanding brick-and-mortar companies buffeted by online shopping, the pandemic, and other forces affecting profits.

By contrast, Virgin Galactic is a relative newcomer to the stock market and is developing a futuristic service. The company remains far from profitability and is still struggling to get its first space vehicle, SpaceShipTwo, into commercial service. Its best years, in terms of profitability, lie years into the future, if they ever come at all. It will require flying missions to the edge of space frequently, perhaps on a weekly basis.

The recent rise in Virgin Galactic’s stock comes as the company is finally resuming its powered flight program. In mid-December, nearly two full years after its last powered spaceflight, Virgin Galactic attempted to send its sleek SpaceShipTwo space plane on its third suborbital flight above 80km.

However, shortly after the space plane was released from its carrier aircraft, named White Knight Two, the ignition sequence to light the space plane’s motor did not complete. As a result, the rocket motor failed to fire, and the two pilots on board safely glided the vehicle back to a runway in New Mexico rather than soaring above the atmosphere. The company subsequently began to investigate this failure of the onboard computer, which halted ignition of the rocket motor, and started to take steps to address it.

Prior to December’s test flight, Virgin Galactic had set out a fairly rigorous schedule, which would have included another suborbital flight with four mission specialists flying inside the SpaceShipTwo cabin to ensure its readiness for commercial operations. This was to be followed by a final test flight, carrying Virgin Galactic’s founder, Richard Branson, during the first quarter of 2021. After this point, the company intended to begin flying commercial missions with paying customers.

On Monday, Virgin Galactic said its next test flight is now scheduled for a flight window that opens on February 13. This test flight will test the remedial work done since the December 12 flight as well as evaluate the new interior cabin, which has been upgraded for passengers. The results of this test flight “will inform the next steps in the test flight program,” the company said. Commercial missions, therefore, are unlikely before at least the second half of this year.