February 11, 2021 by arstechnica No Comments 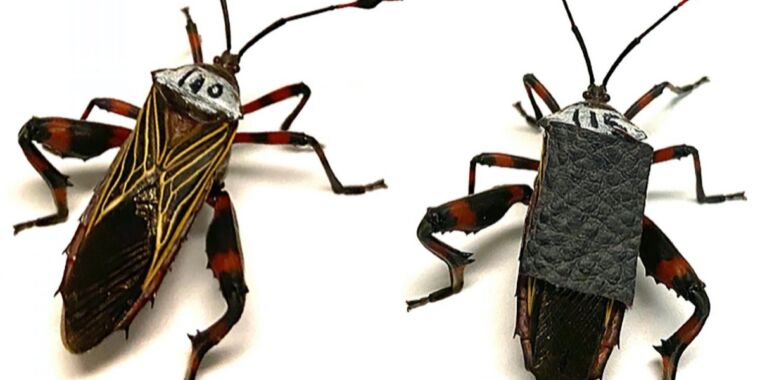 Scientists at the University of Arizona set up their own “Bug Fight Club” in the lab, staging wrestling matches between insects to learn more about defensive structures and the evolution of weapons in the animal kingdom. They outlined their findings in two separate papers, one published last fall in the journal Functional Ecology and the other published last month in Proceedings of the Royal Society B.

Intraspecies battle is commonly found in nature, usually over competition for limited resources (mates, food, or shelter). According to the authors, it’s generally been assumed that whichever creature inflicts the most damage wins the fight. That’s one possible explanation for why so many species have evolved various defensive structures to protect them from damage during a fight. For instance, goats have dermal shields, crocodiles sport dorsal osteoderms, and mantis shrimp boast armored telsons. But do these structures actually influence the outcomes of fights?

“Biologists have generally assumed that the individual who inflicts more damage on their opponent will be more likely to win a given fight,” said co-author John J. Wiens of the University of Arizona while explaining the reasoning behind Bug Fight Club. “Surprisingly, this fundamental assumption had yet to be tested in an experimental study.”

So Wiens decided to design just such an experiment in his laboratory, using giant mesquite bugs (Thasus neocalifornicus). This is a species of the so-called coreid family, also known as leaf-footed bugs. They have thickened forewings as defensive structures. For offense, most coreid species will charge, kick, wrap around/squeeze, or grapple with opponents. Co-author Zachary Emberts, a postdoc in Wiens’ lab, likened it to a college wrestling match, where the two bugs will approach and lock onto each other, trying to inflict damage with the enlarged spikes on their hind legs. “Think of it as a wrestling match where the opponents sneak knives in,” Wiens added.

To assess the impact of defensive structures on success in battle, the team beefed up the protective gear of one group of bugs by gluing tiny pieces of brown faux leather onto the forewings of the combatants, using nontoxic Elmer’s glue. They chose that material because it was light and could withstand the type of attacks typical of the mesquite bug. It was fastened to the section of the forewing most likely to be punctured during a fight. Other bugs had the extra “armor” glued onto their pronotum (a plate covering the thorax), which is not typically damaged in fights. A third baseline group of bugs didn’t get any extra armor at all.

While the armor did add extra weight, the authors noted that this should not be relevant to the experiment, since male mesquite bugs “almost always left fights by walking or running away (as opposed to flying away),” they wrote. “Moreover, our previous observations in other coreids suggest that walking or running away is the most common form of retreating.”

The fighting “arena” was a clear plastic cup with its walls lined with petroleum jelly to prevent the buggy combatants from climbing out—not exactly the UFC octagon, but sufficient for matches between mesquite bugs. The researchers placed a wooden dowel in the center of the “ring,” of a similar diameter to tree branches, to give the bugs something to fight over. For the fights, one armored bug would be placed in the arena alone for 30 minutes. Then a rival without armor was added, thereby signaling the onset of the trial, which ran for the next two hours. Fights often began when both bugs reached the top of the dowel and usually lasted for several minutes (the longest lasted 10 minutes).

The experimental observers kept track of the bugs’ behavior, duration of any fights, and any strikes resulting in damage to the opponent’s wing. When a mesquite bug’s wing was damaged by an opponent’s leg spike, it left a distinct hole that doesn’t close up, making it easy for the researchers to count and measure the holes to assess damage on the frozen former combatants. The fights were all videotaped, and for each pair, the bug who retreated the most was considered the loser (or “subordinate individual”). All the bugs fought just once before being frozen for further analysis.

The team found that adding armor had no impact on the duration of the fights, but armor did increase a bug’s chance of success in battle. Bugs with extra armor were 1.6 times more likely to win fights compared to the control bugs (a 60 percent increase, per the authors). “This tells us that damage is important in who wins the fights,” said Emberts. “This had previously been hypothesized, and it makes intuitive sense, but it had not been experimentally shown before.” The researchers also showed that defense structures can be an important factor in reducing damage.

Wiens and Emberts next turned their attention from defensive structures to the built-in weapons wielded by so many species. They were particularly keen to explore the question of why weapons differ so much among species, from the spiked legs of the mesquite bugs—different species of leaf-footed bugs have different arrangements of leg spikes—to the horns of beetles and the antlers of deer. “Evolution has produced an incredible diversity of weapons in animals, but we don’t fully understand why,” Emberts said. “And if selection favors weapons that inflict the most damage, then why don’t all weapons look the same?”

The researchers carefully measured the shape and size of the leg spikes in 17 species of leaf-footed bugs, and they assessed the average amount of damage (the size and number of punctures) the various spiky configurations could inflict on the forewing of each species. Unsurprisingly, some weapon configurations were more effective than others, particularly certain blade designs. However, “Very different looking weapons can also inflict the same average amount of damage,” Emberts said. “This tells us there could be multiple solutions to inflicting damage.”

In short, “Much of the weapon diversity seen in animals that fight over resources and mates can be explained by how well different weapons perform at inflicting damage,” Wiens said. “How well the weaponry is performing—how much damage it inflicts in fights—is driving its diversification. This finding helps answer the question of why all weapons don’t evolve to look the same. Rather than evolving toward one optimal weapon shape, there are very different shapes that perform almost as well, solving the mystery of why weapons look so different among species.”