Creator or Creature? A Nightmare Wakes dramatizes the birth of Frankenstein

February 27, 2021 by arstechnica No Comments 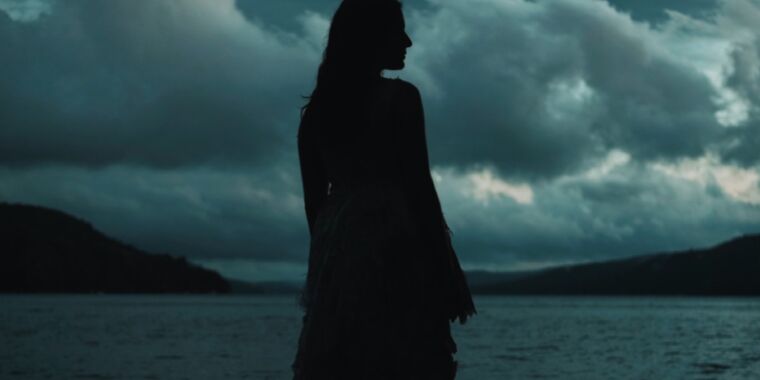 It’s one of the most famous origin stories in literary history. One summer night in 1816 in Geneva, Lord Byron hosted a gathering of his fellow Romantics, including Percy Shelley and his lover (soon-to-be wife), Mary Godwin. The incessant rain confined the party indoors for days at a time, and one night, over dinner at the Villa Diodati, Byron proposed that everyone write a ghost story to amuse themselves. The result was Mary Shelley‘s Frankenstein, the classic Gothic horror tale of a mad scientist who creates a monster—arguably the first science fiction novel.

That fateful summer is the subject of A Nightmare Wakes, the first feature film from writer/director Nora Unkel. It has been portrayed before, most recently in a 2020 episode of Doctor Who, but Unkel’s film delves particularly into Mary Shelley’s inner state of mind and the process of creation, as the world of her imagination begins to bleed into her reality. Per the official premise: “While composing her famous novel, Frankenstein, Mary Shelley (Alix Wilton Regan) descends into an opium-fueled fever dream while carrying on a torrid love affair with Percy Shelley (Giullian Yao Gioiello). As she writes, the characters of her novel come to life and begin to plague her relationship with Percy. Before long, she must choose between true love and her literary masterpiece.”

Born August 30, 1797, Mary Shelley had a nontraditional upbringing. She was the daughter of William Godwin, an anarchist political philosopher, and feminist activist Mary Wollstonecraft, who died shortly after Mary was born. Driven by a great desire for knowledge, she was educated by her father and various private tutors, and she first tried her hand at writing during a stay with radical William Baxter and his family in Scotland.

Mary likely met the aristocratic poet/philosopher Percy Bysshe Shelley in late 1812 or 1813; they were most certainly involved by 1814. Percy had separated from his pregnant wife, Harriet, and that, plus his radical political views, had estranged him from his wealthy family. Legend has it that Mary lost her virginity to Percy in the cemetery where they regularly met in secret. William Godwin may have had radical views on politics, marriage, and “free love,” but these attitudes did not extend to his daughter, it seems. He disapproved of her relationship with Percy. So the pair eloped to France in July 1814, taking Mary’s stepsister, Claire Clairmont (by then Byron’s mistress), with them.

Many travels followed, during which Mary became pregnant and miscarried, and Percy may have taken up with Claire. Mary ascribed to free love in principle, but she seems to have remained faithful to Percy for the duration of their relationship and was secretly jealous of Percy’s dalliances. Her writings reveal that she struggled with depression and visions of her lost baby, but she gave birth to a son, William, in January 1816. That summer, she, Percy, their son, and Claire joined Byron and a young physician named John Polidori in Geneva.

Byron proposed his famous challenge while the group was sitting around the fire at the villa reading German ghost stories. Polidori ended up writing a short story called “The Vampyre,” but Mary struggled to find inspiration, until a chance discussion on the nature of life and the science of galvanism stirred her creative juices. In the early hours of June 26, Shelley experienced a “waking dream,” as moonlight “struggled to get through” the closed shutters in her room.

As she recalled in the 1831 introduction to Frankenstein:

I saw the pale student of unhallowed arts kneeling beside the thing he had put together. I saw the hideous phantasm of a man stretched out, and then, on the working of some powerful engine, show signs of life, and stir with an uneasy, half-vital motion. Frightful must it be; for supremely frightful would be the effect of any human endeavour to mock the stupendous mechanism of the Creator of the world.

Frankenstein; or, The Modern Prometheus was initially a short story, but Mary expanded it to a full-length novel at Percy’s urging. It was published anonymously in January 1818, mostly to critical acclaim. Mary was not identified as the author until the publication of the second edition in 1823, so many people initially assumed it had been written by Percy.

Despite her literary success, Mary’s life was checkered by multiple tragedies. Both Mary’s half-sister, Fanny, and Percy’s estranged wife committed suicide—Fanny by a laudanum overdose, Harriet by drowning. Percy and Mary got married shortly after Harriet’s death, but despite several pregnancies, only one child survived to adulthood: Percy Florence. In the summer of 1822, while in Italy, Mary miscarried yet again and nearly died from loss of blood. A quick-thinking Percy placed her in an ice bath to staunch the bleeding and likely saved her life. Alas, Percy drowned in a boating accident later that same summer, devastating an already depressed Mary.

Frankenstein is the book for which she is justly famous, but she built a fine literary career as a writer and editor. Shelley never remarried, despite the occasional suitor, and died on February 1, 1851, at 53, possibly from a brain tumor.

Most of the above aspects of Shelley’s life find their way into A Nightmare Wakes—Unkel strove to be historically accurate even with regard to the lighting and production design—albeit reimagined and condensed for narrative purposes, since most of the film takes place in the summer of 1816. In this telling, Mary is pregnant with her first child when she, Percy, and Claire arrive in Geneva, and she tragically miscarries. Out of this tragedy comes the inspiration for Victor Frankenstein, driven to create a Creature stitched together from dead cadavers and “reanimated” during a dramatic thunderstorm. Philippe Bowgen plays Byron, Claire Glassford plays Claire Clairmont, and Lee Garrett plays Polidori.

“Shelley’s struggle with love, loss, abandonment by society and family, and her own sanity, had yet to be captured fully on-screen,” Unkel said of what drove her to make the film. “She lived a colorful life of love, drugs, and freedom, alongside some of the most celebrated artists of her day.” Ars sat down with Unkel to learn more.