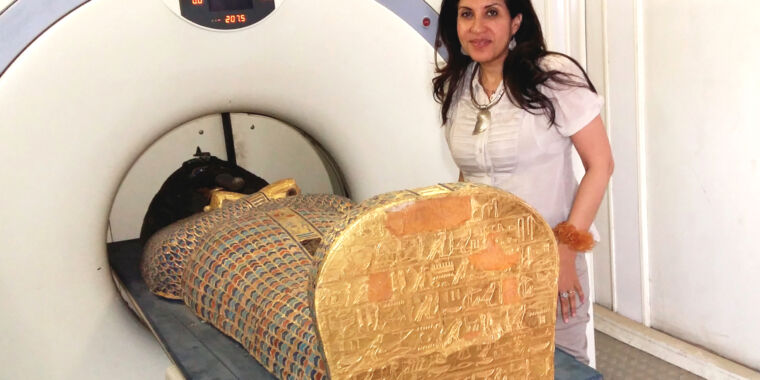 CT scans of a mummified Egyptian pharaoh, once suspected to be the victim of a palace assassination, suggest that he was actually executed after being captured in battle in the mid-16th century BCE.

Pharaoh Seqenenre led his army from Upper Egypt in the 1550s BCE to face the Hyksos, a group of warriors from the Levant who occupied Lower Egypt and demanded tribute from Upper Egypt during what historians call the Second Intermediate Period. It’s known that Seqenenre died during this conflict, but it has been unclear whether he was assassinated in his bed in the palace at Thebes or died on the battlefield.

A computed tomography (CT) scan offered a look at his wounds, along with the details of his mummification. Radiologist Sahar Saleem of Cairo University and former Egyptian Minister of Antiquities Zahi Hawass concluded that he most likely died near the front lines and was brought back to Thebes for mummification and burial.

Archaeologists rediscovered Seqenenre’s tomb in the 1880s. In the 1960s, an X-ray of his mummy revealed the injuries that probably killed him: cut, cracked, and shattered bones in his forehead, nose, cheek, and the base of his skull. All the wounds seemed to be on the left side of the pharaoh’s head, which suggested that he could have been lying on his right side when his attackers struck.

That gave rise to the palace conspiracy theory, which suggested that Seqenenre’s own courtiers had arranged for the king to be murdered in his sleep. Another idea held that the pharaoh had been executed by the Hyksos King Apophis after being captured in battle; that theory got support from the condition of Seqenenre’s mummy, which had a foul smell and was partially disarticulated when archaeologists unearthed him in the 1880s. That evidence seemed to suggest that he had been mummified somewhere less well-equipped than the royal funerary workshop near Thebes—perhaps a hasty field mortuary somewhere between Thebes and Avaris.

A recent CT scan ruled out the midnight assassination plot. Instead, the evidence supports the idea that the Hyksos captured the Egyptian pharaoh in battle, executed him—with considerable overkill—and then allowed the Egyptians to take his body back to Thebes.

The CT images revealed another set of injuries on the left side of the pharaoh’s head, which the ancient embalmers had concealed so cleverly that it didn’t show up in the 1960s X-ray images. Based on the angle of the wounds, most of the blows had landed while the king was upright, although they’d also come from slightly above him, as if his attackers had stood over him while he knelt. Seqenenre’s wrists and hands looked as if they’d been bound behind his back when he died; despite the devastating injuries to his head and face, his arms showed no signs of attempts to block the blows. Additionally, his wrists were flexed in a way that suggested they had been bound when he died, and spasms at the moment of death had left the muscles locked in that position.

Overall, it looked as if the king knelt with his hands bound while Hyksos soldiers wielding a mixture of weapons dealt a series of lethal blows. The efforts to repair or conceal the damage after death suggested that he had, in fact, been treated by well-equipped professional embalmers, but the work had been delayed until after the early stages of decomposition.

A rude letter started it all

Around 1650 BCE, a group of people from the Levant took over the northern half of Egypt. The Hyksos, as the Egyptians called their foreign rulers, set up a capital at Avaris, a city in the Nile Delta, and from there they ruled Lower Egypt (the northern end of the Nile valley) and exerted enough influence to demand regular tribute payments from the Egyptian kings of Lower Egypt (the southern end of the kingdom). And in the 1550s, the Hyksos’ King Apophis sent a rude letter to Egypt’s Pharaoh Seqenenre at Thebes.

The hippopotamuses in a sacred pool at Thebes were bellowing all night, Apophis wrote, and their racket was disturbing his sleep. An Egyptian text records that Apophis demanded the death of the hippos and the destruction of the sacred pool. Of course, since Avaris lay several hundred kilometers north of Thebes, Apophis clearly just wanted to start some trouble (or later Egyptian historians wanted to make it look as if he had).

“The end of the papyrus is lost, but the preserved text ends with the statement that Seqenenre called his counselors, which probably indicates an introduction to a battle,” wrote Saleem and Hawass.

Based on inscriptions on the ruins at what is now Deir El Ballas, just north of Thebes, Seqenenre seems to have ordered the construction of a fortress there sometime during his reign. Surviving documents describe how troops and supplies assembled there before marching north against the Hyksos. And if Saleem and Hawass are right, Seqenenre himself was on the front lines with his troops.

The last argument of kings

No ancient documents survive to tell us the outcome or even the location of the battle between Seqenenre and Apophis. We don’t even have records of exactly when or how Seqenenre died, which is why there was room for the palace conspiracy theory to develop. But it’s almost certain that the two armies met somewhere between Thebes and Avaris, and 3,500 years later, Seqenenre’s remains tell the story of his final moments.

For example, fractures tend to be wider in the direction from which the blow came, since the impact is stronger on that side. Blunt objects damage bones and soft tissue differently than sharp ones, and the width of a fracture can also tell you about the size of the blade that caused it.

Saleem and Hawass compared Seqenenre’s injuries to a collection of Hyksos weapons, including daggers, spearheads, axes, and swords. They noticed, for instance, that the axes Apophis’ soldiers carried had smaller cutting edges than those of Seqenenre’s troops, and they made deeper, more focused cuts. The researchers also managed to reconstruct the positions of the pharaoh’s killers, the weapons they used, and how he died. (Fair warning, the next few paragraphs are pretty graphic.)

Someone standing in front of the kneeling king swung a sharp, heavy weapon—a sword or an axe—and struck his forehead from the left side. A sharp, double-edged weapon like an axe split his right eyebrow. And someone standing to the king’s left stabbed him with something long and sharp, probably a spearhead, which pierced his skull just below his left ear and thrust toward the brainstem.

“Any one of those injuries is a potential cause of death, but the three of them together is almost certainly fatal,” wrote Saleem and Hawass.

Other wounds may not have been lethal, but at that stage, it probably didn’t matter. The Hyksos were making a point. Several blows from a heavy, blunt object—maybe a staff or the shaft of an axe—in the hands of someone towering over the king and slightly to his right, shattered Seqenenre’s nose, right cheek, and right eye socket. Someone on the king’s left, perhaps the same person who struck the first lethal blow, left a deep cut on his left cheek, fracturing the bone beneath.

What may have been among the final blows, from a blunt object, landed on the right side of the king’s skull. The angle of the blow suggests it came from directly above the king, and he may have been lying on his left side at that point, felled by the earlier onslaught. Pharaoh Seqenenre, born Taa, was dead.

Some time would pass before the royal remains could be properly mummified, though, and Saleem and Hawass saw evidence of that in the CT images. First of all, the embalmers left Seqenenre’s brain in his skull, although they removed his other organs through an incision on his left side. Leaving the brain is unusual, but it allowed Saleem and Hawass to see that the pharaoh’s gray matter had shifted toward the left side of his skull, which probably means that he lay on his left side—the way he seemed to have fallen by the time the last of his assailants’ blows landed—for at least a few days after he died.

Saleem and Hawass suggest that this evidence, along with the general state of the king’s corpse, could mean that he died far away from the royal embalmers’ workshop at Thebes and had to be transported back. The quality of the embalming, which tried to restore his appearance and conceal his wounds, suggests expert embalmers with good equipment and materials at their disposal. That seems to rule out the idea that Seqenenre was embalmed on the battlefield where he fell.

Seqenenre’s death at the hands of the Hyksos, and the sheer brutality of its nature, may have galvanized the kingdom to fight back against its conquerors. Seqenenre’s oldest son, Kamose, went on to become pharaoh and also campaigned against the Hyksos; he, too, died in battle. Kamose’s younger brother Ahmose took up the mantle, expelled the Hyksos, and reunited Egypt. His reign marks the end of the Second Intermediate Period and the beginning of the New Kingdom.