February 22, 2021 by arstechnica No Comments 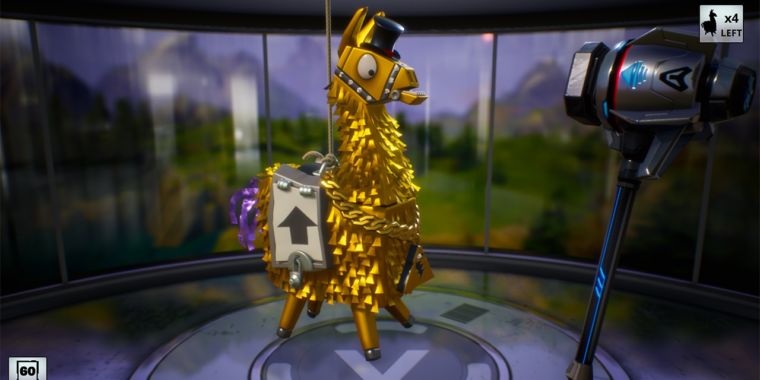 Epic is set to settle a class-action lawsuit over its use of randomized loot boxes in Fortnite‘s “Save the World” mode by paying affected players with in-game currency. Rocket League players who previously purchased loot boxes in that game will also receive an in-game payment.

While Epic never offered loot boxes in Fortnite‘s mega-popular battle royale mode, it let “Save the World” players purchase “loot llamas” full of random items until early 2019 (amid international outcry about the randomized loot-box business and its similarity to gambling). Shortly after ending the practice, Epic was faced with a class-action lawsuit alleging, among other things, that it had “psychologically manipulate[d] its young players into thinking they will ‘get lucky.'”

Under a proposed settlement for that suit, which Epic says has achieved preliminary approval, all players who purchased a loot llama at any time will be rewarded with 1,000 V-Bucks (worth roughly $8). Even though it’s settling a US lawsuit, Epic says this same deal will apply to all Fortnite players globally.

Rocket League players will similarly receive 1,000 credits (worth roughly $9.10) if they bought a randomized Event Crate or key in that game before Epic stopped offering them in October 2019 (just months after it purchased Rocket League developer Psyonix). Players of both games won’t have to do anything to claim the benefit, which will appear in their accounts in the coming days.

Epic estimates roughly 6.5 million Fortnite players and 2.9 million Rocket League players will receive the automatic virtual currency payments, according to The Verge. That suggests a rough valuation of over $78.3 million in digital reward payouts as part of the settlement. [Update: An Epic spokesperson has clarified to Ars Technica that these numbers only cover the US players who will be receiving the digital currency payout. An undisclosed number of non-US Fortnite players will also be receiving the 1,000 V-Bucks.]

The actual cost incurred by Epic for the giveaway will likely end up much lower, though. Distributing the purely virtual currency incurs minimal direct costs for Epic and only poses an indirect cost in the sense that it replaces virtual currency purchases those players would have made anyway. Some lapsed players won’t end up using their digital windfall at all, while others would not have spent any additional money in the game regardless.

In a way, the digital giveaway could even be seen as an effective promotion, luring players back to the games and creating the potential for them to spend more on additional microtransactions down the road. In that sense, the settlement is somewhat reminiscent of a Nintendo price-fixing case that the company settled with prosecutors in 1991. The payout there came in the form of a $5 coupon that could only be redeemed by buying additional Nintendo products, a marketing coup that Nintendo is probably sad it didn’t come up with itself.

In addition to the virtual currency, Epic will also be providing “up to $26.5 million in cash and other benefits to U.S.-based Fortnite and Rocket League players” to settle the claims. Those cash payments (of up to $50 per claimant) will only be available to players who submit an active claim form establishing that they think their purchase constituted “consumer fraud” or breach of contract. Minors in California who purchased a loot box “with [their] own money and without parental permission” will also be eligible for a cash refund of up to $50 if they submit a claim.

“We believe players should know upfront what they are paying for when they make in-game purchases,” Epic wrote in a tweet announcing the move today. “This is why today we only offer X-Ray Llamas that show you the contents before you purchase them in ‘Save the World'” (and similarly transparent blueprints in Rocket League).

While some European countries have banned loot boxes as a form of illegal gambling, legislative efforts to regulate the practice in some US states (and the US Senate) have by and large stalled after gaining some momentum in 2018 and 2019.