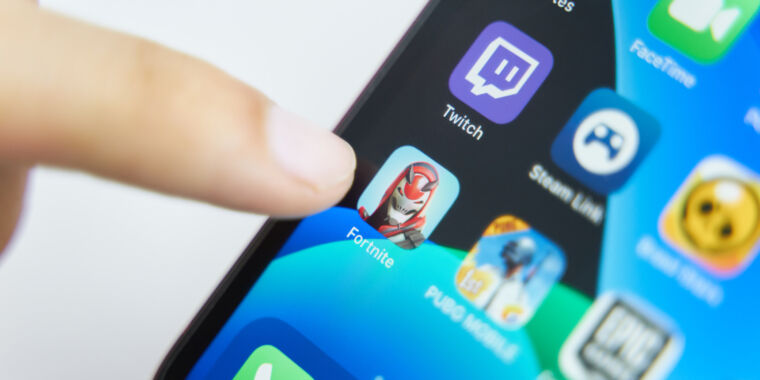 Epic Games, maker of Fortnite, is loading up a new map in its ongoing fight against Apple as it files an antitrust complaint against the mobile phone maker in the European Union.

Epic alleges in its complaint that Apple uses its sole control over iOS apps to block competitors and benefit itself at developers’ expense in violation of European competition law, the company said today.

“What’s at stake here is the very future of mobile platforms,” Epic CEO Tim Sweeney said in a written statement. “We will not stand idly by and allow Apple to use its platform dominance to control what should be a level digital playing field. It’s bad for consumers, who are paying inflated prices due to the complete lack of competition among stores and in-app payment processing. And it’s bad for developers, whose very livelihoods often hinge on Apple’s complete discretion as to who to allow on the iOS platform, and on which terms.”

Apple in turn said that Epic is the sole author of its own woes, writing that the company enabled a feature “which was not reviewed or approved by Apple,” deliberately and provocatively breaking Apple’s developer agreement by doing so. “Their reckless behavior made pawns of customers, and we look forward to making this clear to the European Commission,” Apple claimed.

Apple isn’t wrong when it says Epic broke its rules on purpose. That’s exactly what Epic did last August, when it suddenly unveiled an alternate in-app payment system for Fortnite purchases on Android and iOS.

Apple explicitly requires all in-app purchases to go through its own payment system, where it takes a 30 percent cut of sales. A short time after Epic launched its alternate payment system—which offered players a discount on purchases to make the point—Apple booted Fortnite from the iOS app store. Epic, clearly ready and waiting, immediately filed a lawsuit alleging that Apple violated antitrust law.

That case is still slowly moving through federal court and will be for some time. For now, Fortnite is still blocked from iOS, but other games using Epic’s Unreal engine are still allowed for the time being. The judge overseeing the case has also thrown out some of Apple’s counterclaims against Epic.

A litany of complaints

As we’ve explained before, you do not need to have a literal monopoly over a market to be in violation of antitrust law. Instead, the law is concerned with how you use the power you have. Although Apple controls a minority of the global smartphone market (Android has a larger market share both in the US and worldwide), it nonetheless may be leveraging its business in anticompetitive ways.

Epic is not the first to complain that Apple’s iOS App Store is unlawful, and it seems unlikely to be the last. In the EU specifically, Spotify filed a similar complaint against Apple back in 2019.

Spotify also has to use Apple’s in-app payment system to take purchases, including subscription fees. Over time, Spotify alleged, Apple made it more and more difficult for app makers to direct users to pay outside Apple’s ecosystem, such as through a website. In 2014, Spotify started taking in-app purchases on iOS but raised its prices by 30 percent—from almost 10 euros ($12) a month to almost 13 euros ($15.54) a month—to cover Apple’s fees.

Because Apple also owns and operates its own music service, Spotify alleged, the fee from Apple is directly anticompetitive and hurts rivals who challenge Apple’s own first-party apps by putting them at a price disadvantage. Messaging app Telegram also filed a similar complaint with European regulators in 2020.

Apple’s app store practices are also under investigation here in the US. Last October, a Congressional report examining Big Tech firms’ market power concluded that Apple uses the App Store in an exclusionary way. The committee responsible for writing the report found evidence that Apple company leadership, including former CEO Steve Jobs, had “acknowledged that [in-app payment] requirement would stifle competition and limit the apps available to Apple’s customers.”