McLaren drops the V8, moves to V6 plug-in hybrid for its next supercar 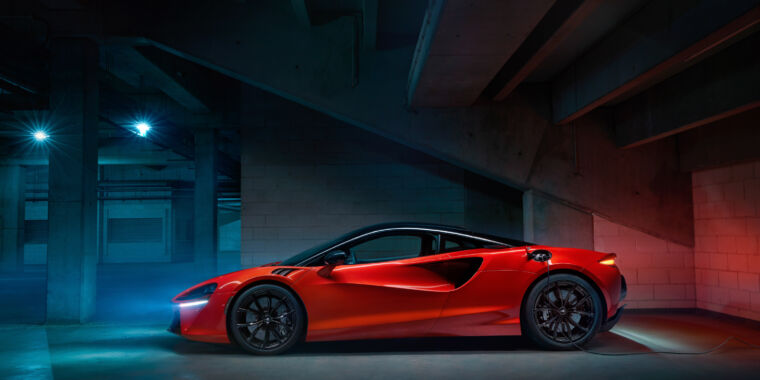 On Tuesday evening, McLaren unveiled its newest supercar, the Artura. It’s the company’s first plug-in hybrid EV, promising all the usual performance superlatives associated with McLaren: 0-124mph (200km/h) in 8.3 seconds, a 10.7-second quarter-mile time, and a top speed of 205mph (330km/h) put it in good company with the rest of the brand’s range. But it should also be the most efficient McLaren so far, emitting just 129g/km CO2 according to the EU’s WLTP test.

And the Artura really is all-new. Previous McLarens, from the MP4-12C onwards, have all used variations of the same carbon fiber monocoque chassis and derivatives of the same V8 gasoline engine, either in 3.8L or 4L capacities. Instead, the Artura will use a new platform, called the McLaren Carbon Lightweight Architecture. And the powertrain is entirely new as well.

But the V6 is only half of the story; this is a PHEV after all. So there’s a 94hp (70kW), 166lb-ft (225Nm) axial flux electric motor, which McLaren says is more power-dense than conventional radial flux motors. In fact, McLaren claims that the Artura’s electric motor has 33 percent more power density per kilogram than the electric motor used in the P1 hypercar. The electric motor also functions as the Artura’s reverse gear—forward motion from either the engine or electric motor is via an eight-speed dual-clutch transmission.

The electric motor is connected to a 7.4kWh liquid-cooled lithium-ion battery pack, made up of five modules and mounted behind the monocoque. The batteries can recharge via excess power from the engine while driving; connected to an AC wall charger, the car (according to McLaren) should take 2.5 hours to reach 80 percent state of charge.

The Artura’s electric motor is capable of propelling the car by itself, with an electric-only range of 19 miles (30km), although only at speeds of up to 25mph (40km/h). And similar to those earlier (not-plug-in) hybrid McLarens, the electric motor also provides “torque infill,” where it is used to supplement the V6’s output.

McLaren has managed to keep the Artura’s weight down, despite the addition of an electric motor and battery pack. With a dry weight of 3,075lbs (1,395kg), the PHEV Artura compares favorably to non-hybrid supercars like the Ferrari F8 or Lamborghini Hurácan.

The tech upgrade isn’t just restricted to the Artura’s powertrain. For one thing, there’s a suite of advanced driver-assistance systems, including adaptive cruise control. And there’s a new infotainment system that now has Apple CarPlay and Android Auto functionality, as well as apps from McLaren like track telemetry. The car even features new Pirelli P Zero Corsa tires with what the rubber company is calling “Cyber Tire” technology, which combines software as well as hardware in the tires that “generates a stream of high-value data based on tire specific conditions that is relayed to the control systems of the Artura to deliver the best tire performance.”