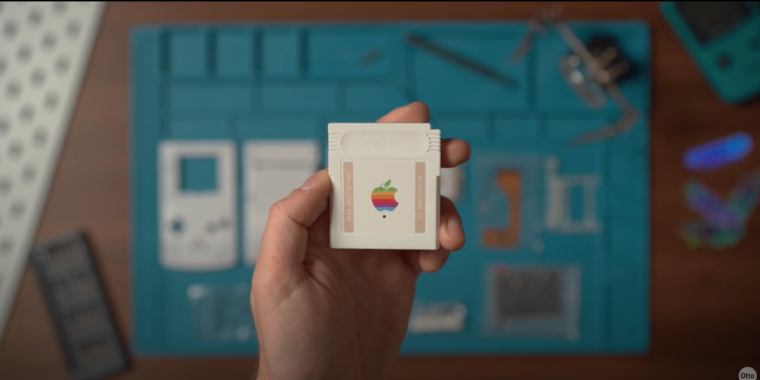 A tech DIY YouTuber named Otto Climan worked with Retro Modding to make a beautiful, classic Apple-style Game Boy Color with an updated screen and the ability to work as an Apple TV remote.

There’s no overstating the love-it/hate-it relationship consumers and tech enthusiasts have with Apple’s touchpad-based remote for the Apple TV and Apple TV 4K. Many people consider it practically unusable, and articles or videos about the Apple TV 4K often get multiple comments stating “but that remote, though.” Plus, many users say it’s so small that it’s far too easy to lose.

(Full disclosure: when I reviewed the Apple TV 4K, I actually liked the remote. I think it’s much easier to scroll through content with than alternatives from Roku and others. But I didn’t speak for all of Ars in that, to say the least, and the general consensus in comment threads and Internet forums everywhere seems to be “thumbs down.”)

In his YouTube video, Climan reviews the wild history of Game Boy modifications and attachments, and he starts to work modifying a classic Game Boy Color handheld console. He installs a more modern LCD screen and puts the hardware in casing designed by Retro Modding.

Retro Modding also provided a cartridge, which Climan loaded with an SD card that can contain ROMs for the Game Boy to run. He then used command-line tools to program a ROM that allowed the use of the Game Boy Color’s existing IR port (which was in the past used for transferring data between Game Boys) to communicate with the Apple TV, in lieu of Apple’s own controversial remote.

In the end, it works, and Climan notes that he was able to make it happen thanks to the Game Boy’s thriving and helpful online modding community. We only get to see a few seconds of the device being used as a remote, but it’s enough to let us know that it works.

We’ve included some images from the video above, but we recommend watching the video because Climan deserves the clicks for his work here. The video is Italian, but if you’re an English speaker, Google’s automatically generated subtitle translation does a good-enough job to get the general gist across—though little of the nuance.