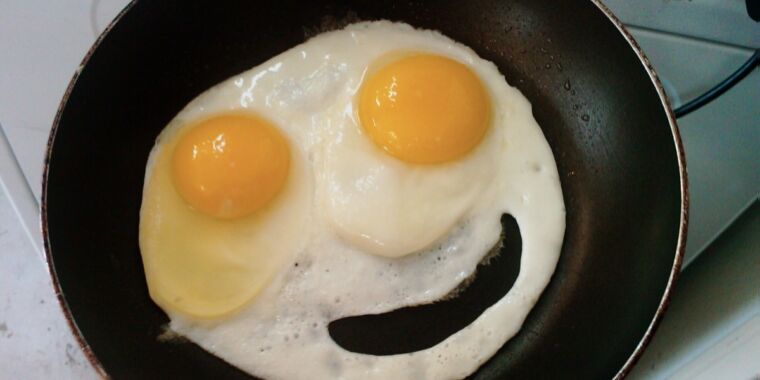 Home cooks around the world have relied on nonstick cookware for decades for quick and easy cleanup after preparing meals. But sometimes food will get stuck to the center of nonstick pans anyway. A new paper published in the journal Physics of Fluids offers a likely explanation—food sticks because of the same underlying mechanism that gives rise to the coffee ring effect and so-called “wine tears.”

The first nonstick frying pans were made possible by the invention of Teflon in 1938 by a chemist named Roy Plunkett, who was researching possible new chlorofluorocarbon refrigerants as part of a joint venture with DuPont. In April of that year, Plunkett later recalled, his assistant selected one of the cylinders they were using to store tetrafluoroethylene gas (TFE) at dry-ice temperatures until the canisters were ready to be chlorinated for their experiments. When the assistant opened the valve, the gas did not flow under its own pressure from the container, as expected.

Puzzled, the researchers opened the container only to find the gas was gone. In its stead, they found a white powder. The TFE had polymerized into a waxy solid called polytetrafluoroethylene (PTFE), which proved to have some interesting properties: it was chemically inert and heat-resistant, and it had very low surface friction. Perhaps it wasn’t useful as a refrigerant, but it proved to be a terrific nonstick coating.

Teflon was first used as a seal for the atomic bomb during Word War II, but Dupont registered the Teflon trademark in 1944 and began marketing it as a nonstick coating for commercial bread and baking pans. Eventually, it found its way into everyday consumer cookware, and the rest is history. Today, several other nonstick coatings are also available in consumer products, and while culinary purists might prefer cast-iron skillets or pans without nonstick coatings for sauces and gravies, there’s no question most cooks appreciate the time saved in cleaning up.

But sometimes food still gets stuck to the center of a frying pan, even with a nonstick coating. Researchers at the Czech Academy of Sciences were curious about why this might be the case, and they decided to experiment. They videotaped sunflower oil in a nonstick pan coated with ceramic particles being heated, and they noted the speed at which a suspicious dry spot formed in the oil and grew. They performed similar experiments with Teflon-coated pans.

According to co-author Alexander Fedorchenko, a physicist at the Czech Academy of Sciences, food getting stuck to the center of the pan “is caused by the formation of a dry spot in the thin sunflower oil film as a result of thermocapillary convection.” It’s a variant of the so-called Marangoni effect—after Italian physicist Carlo Marangoni—which is responsible for both wine tears and the infamous “coffee ring effect,” which has also generated much interest among physicists.

As we’ve reported previously, British physicist James Thomson (elder brother to Lord Kelvin) first noticed wine tears in 1855. The effect is most notable in wines (or other spirits like rum) with alcohol content at least as high as 13.5 percent. That’s because alcohol has a lower surface tension than water. If you spread a thin film of water on your kitchen counter and place a single drop of alcohol in the center, you’ll see the water flow outward, away from the alcohol. The difference in the alcohol concentrations creates a surface-tension gradient, driving the flow.

In the case of food sticking to the center of nonstick frying pans, we’re talking about a temperature gradient that develops in the oil film when a pan is heated from below—the aforementioned thermocapillary convection. As the temperature rises, there is a corresponding decrease in surface tension, producing a surface tension gradient. The oil then flows outward, getting thinner and thinner until it ruptures, leaving a dry spot in the center of the pan.

So what’s a frustrated cook to do to keep food from sticking to the center of their frying pan? It’s mostly commonsense advice. “To avoid unwanted dry spots, the following set of measures should be applied: increasing the oil film thickness, moderate heating, completely wetting the surface of the pan with oil, using a pan with a thick bottom, or stirring food regularly during cooking,” Fedorchenko said.

In terms of relevance, the researchers’ findings aren’t limited to home cookware. “Formation of dry spots and rivulets in thin films of liquid is ubiquitous in nature and engineering,” the authors wrote. “Everyone could observe how initially a continuous film of water on a windowpane suddenly ruptures, leaving islands of dry spots.” Thin liquid films are also used in fluid distillation columns, industrial scrubbers, and other devices with electronic components. “Dry spot formation or film rupture plays a negative role, resulting in sharp overheating of the electronic components,” said Fedorchenko. “The results of this study may, therefore, have wider application.”