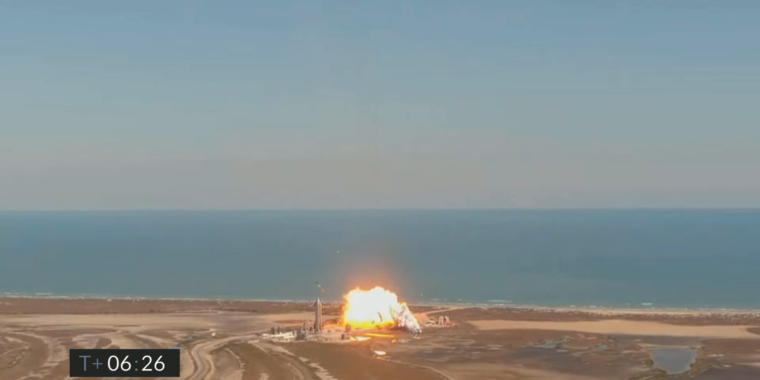 4pm ET Update: SpaceX’s SN9 prototype took off from its launch site on Tuesday afternoon and made what appeared to be a nominal flight to an altitude of 10km. The rocket then executed its belly flop maneuver before nearing the ground. However, it seems that one of the two Raptor rocket engines required for the landing did not relight, so the rocket crashed.

The next prototype on a launch stand nearby, SN10, was not harmed. It will probably fly a similar mission in a few weeks to see if SpaceX can stick the landing this time.

The notification came early Tuesday morning, when the FAA posted, “The SpaceX Starship launch is scheduled off Boca Chica with no major impacts,” as part of its daily planning advisory. The handful of local residents in Boca Chica were also notified of the need to evacuate from their homes this morning.

If you’ve been following this saga, this approval has been a long time coming. The company first began making final preparations for a launch more than a week ago, but an attempt on Monday, January 25, was eventually called off. Then, last Thursday, SpaceX went so far as to evacuate nearby residents, have local sheriffs clear nearby beaches, and fully fuel the vehicle. Weather conditions were perfect.

But the vehicle did not go anywhere, as it lacked a permit to make a 10km flight test. As Starship vented liquid oxygen on the launch pad, SpaceX founder and Chief Engineer Elon Musk vented on Twitter. “The FAA space division has a fundamentally broken regulatory structure,” Musk said. A similar staredown happened on Friday morning, when preparations were made for a launch. Still, no flight permit came.

Since then, sources have indicated that the FAA was taking extra care with SN9 flight approval after there were irregularities during the permitting process for the SN8 flight in December from South Texas. On Tuesday morning, the FAA clarified the situation, stating:

Prior to the Starship SN8 test launch in December 2020, SpaceX sought a waiver to exceed the maximum public risk allowed by federal safety regulations. After the FAA denied the request, SpaceX proceeded with the flight. As a result of this non-compliance, the FAA required SpaceX to conduct an investigation of the incident. All testing that could affect public safety at the Boca Chica, Texas, launch site was suspended until the investigation was completed and the FAA approved the company’s corrective actions to protect public safety.  The corrective actions arising from the SN8 incident are incorporated into the SN9 launch license.

Now this regulatory drama will recede into the background as SN9 takes center stage. It will launch against a stunning backdrop as SpaceX has already moved a second Starship prototype to a second nearby launch stand. This SN10 vehicle may very well launch later this month as SpaceX accelerates its test flight program.

The nominal plan is for the SN9 prototype to ascend to an altitude of about 10km and then perform a “belly flop” maneuver to simulate bleeding off energy during a return through Earth’s atmosphere. As it nears the surface, this Starship prototype will reorient itself and land near the launch pad. It was this last part—performing a final landing maneuver—that came undone with SN8’s spectacular, fiery demise in December.

SpaceX is expected to carry a webcast of the launch attempt on Tuesday—its timing is uncertain, of course—and we will embed it below when it goes live.

Note: This story was updated after publication because the FAA issued a statement about the approval process for SN9.