The Mazda CX-30 Turbo: How I learned to love the crossover

February 9, 2021 by arstechnica No Comments 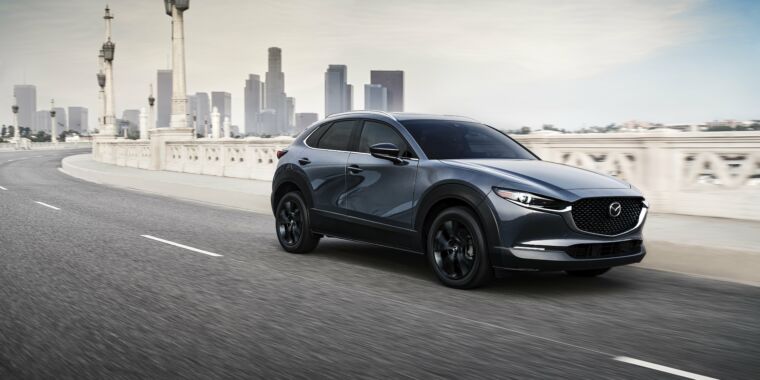 Mazda has now brought its 250hp 2.5L turbocharged engine to the CX-30 crossover.

No car has surprised me more in recent years than the Mazda CX-30. It’s the company’s compact crossover, built on its new Skyactiv-Vehicle architecture, which it shares with the Mazda 3 sedan and hatchback. Like those models, the CX-30 is now available with Mazda’s turbocharged 2.5L engine, giving the already-refined CUV the power it needs to compete for customers with the premium brands the Japanese automaker is beginning to target. Although, starting at $29,990, it’s at a price that’s still more Mazda than Mercedes-Benz.

Picking on crossovers is easy. Heck, I’ve done it more than once. But I have a confession to make: I’m starting to like some of them. As a now-firmly middle-aged person with the aches that entails, crossovers are easy to get into and out of than low-slung cars. The same goes for putting stuff in the back, and the higher hip point means a better view of the road ahead. What’s more, they don’t have to be boring choremobiles.

In the same way that the hot hatch evolved out of front-wheel-drive econoboxes in Europe in the 1970s, fun-to-drive crossovers are now a thing. Exhibits A, B, and C: the Porsche Macan GTS, Cayenne Coupe Turbo S E-Hybrid, and Aston Martin DBX. True, you’d expect those to be good, given how much they cost. But now we can add the CX-30 Turbo to that list—and for less than half the price of the Macan.

I’ve raved about the CX-30’s controls before—the width of the steering wheel rim and the short, firm travel of the brake pedal—and that stuff is all still here, and it’s all still great. Mazda is moving upmarket in terms of trim materials and fit and finish, but even a fully loaded CX-30 Turbo (the Premium Plus package) undercuts all of the German compact crossovers at $33,900. You don’t get quite the same amount of toys as you would in an established luxury brand, but then you’ll pay several thousand dollars less for the CX-30 Turbo than an Audi Q3, which gets the same gas mileage but isn’t much fun to drive.

According to Mazda, the main differences between the CX-30 Turbo and the Mazda 3 Turbo I drove late last year mostly involve refining the software controlling the all-wheel drive system and vehicle dynamics so that the car doesn’t have to stop when the pavement runs out. While no one is pretending the CX-30 Turbo is a rock crawler, I’m told that it can cope with anything it can clear—which is 8 inches (203mm). I’ll have to take Mazda’s word for it, having just over a day with the car and no rugged trail on which to drive.

If anything, the CX-30 is a better driver’s car than the Mazda 3, and that comparison comes down to one thing: visibility. Because you sit high up, you can see more of the world around you. Do not fear this high-up driving position—if it works for artists who practice their craft in the World Rally Championship, it’ll work for you on the back roads.

My take will upset some people who might feel affront at the thought of a lifted-up hatchback being better to drive than an actual hatchback or its sedan sibling. And yet, in an online briefing with Mazda last week, more than a few journalists favorably compared the CX-30 to a hot hatch. Mazda protests that it did not set out to make the CX-30 a hot hatch, and I believe it, but nevertheless it has delivered a vehicle that reminds me favorably of the five-door Subaru WRXes of the mid-2000s.