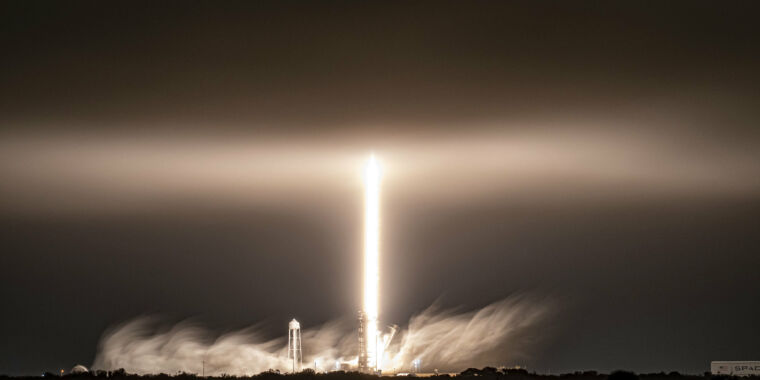 A little more than three weeks ago, a Falcon 9 rocket launched from Florida’s Kennedy Space Center carrying a payload of 60 Starlink satellites into low Earth orbit. It was the first of four such missions flown this month by SpaceX.

The entire mission was nominal, except for a problem with the rocket’s second stage. Typically, within an orbit or two of launching, the Falcon 9 rocket’s Merlin vacuum engine will relight and nudge the second stage downward so that it harmlessly re-enters Earth’s atmosphere into the Pacific Ocean.

Ummm… just caught this flying over my home in SW Portland. pic.twitter.com/CvQJwvWsyj

However, there was not enough propellant after this launch to ignite the Merlin engine and complete the burn. So the propellant was vented into space, and the second stage was set to make a more uncontrolled re-entry into the atmosphere. In this case, the Falcon 9 upper stage still comes back because when it released the Starlink satellites, the vehicle was orbiting Earth at an average altitude of about 250 km. This high above the Earth, it was still susceptible to drag from the thin wisps of our planet’s upper atmosphere.

On Thursday night, three weeks after launching, this second stage re-entered the thicker part of Earth’s atmosphere and, in doing so over populated areas, provided some spectacular views for the Portland and Washington state region. Videos shared on various social media networks showed what appeared to be an invasion by an alien armada.

This was, however, simply the Falcon 9 rocket’s second stage—which weighs about four metric tons unfueled—breaking apart in the atmosphere and burning up. It is likely that the second stage completely broke apart over the Rocky Mountains near the United States and Canadian border.

The second stage of Falcon 9 burning up upon re-entry above my home in the Puget Sound.

Did any pieces make it to the ground? It’s possible that some of the more dense components of the rocket, such as pieces of the Merlin engine or composite overwrap pressure vessels, withstood re-entry and landed on the ground in the Rockies. There were no immediate reports of any injuries.

Historically, when rockets deployed their payloads at higher orbits, these spent second stages were often just left in space for decades. Today, they’re a big contributor to the problem of orbital debris, so there is pressure on rocket companies to “dispose” of their second stages, either by deorbiting them or sending them into heliocentric orbits. SpaceX hopes to address this problem with its Starship vehicle by making the entire vehicle reusable, with both the Super Heavy rocket and Starship upper stage returning to Earth for reuse.