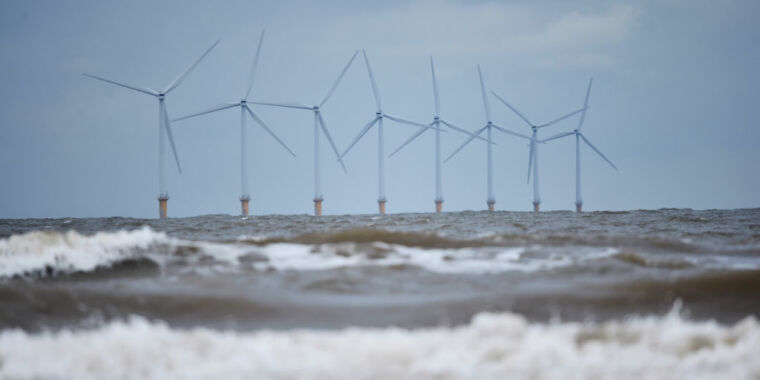 On Monday, the Biden administration announced a major effort to kickstart the offshore wind industry in the US. While offshore installations have been booming in Europe, the US is still limited to a single, small offshore farm, with new projects seeing repeated delays during the previous administration. Now, the US is laying the groundwork to see 30 GW of offshore capacity installed over the decade, with extensive growth possible in the decades beyond.

The effort involves the coordinated activities of multiple agencies, including everything from accelerated permitting of planned projects to research funding intended to lower future costs.

And end to delays

While the US is one of the global leaders in wind power, almost all of its turbines are on land. Here, the logistics of installation and required support hardware are substantially simpler and less expensive. That has allowed wind power prices to eclipse nearly every other option for generating electricity. But offshore wind is far more challenging, and it’s only recently that costs have dropped to the point where offshore wind is competitive with nuclear and coal.

The US has the potential to benefit from the advances made in Europe (primarily in the form of ever-more massive turbines) and the fact that much of the East Coast has an extended, shallow offshore shelf. But so far, there’s only one wind farm operating off the coast here. Several others are in the planning stages, but they faced delay after delay during the Trump administration before finally being approved earlier this month. Local opposition has also caused problems for some projects.

Despite the delays, many East Coast states have made offshore wind a centerpiece of their plans to expand renewable energy, in part because their population density means they don’t have access to a lot of other good options. New Jersey, New York, and Virginia all have plans for extensive wind farms, including some individual sites expected to have roughly a gigawatt of capacity.

The new administration’s plan involves getting the federal government on the same page as the states. Offshore wind is a complicated endeavor that touches on things regulated by the Departments of Commerce, Energy, and Interior. Monday’s announcement saw the heads of all three agencies (Gina Raimondo, Jennifer Granholm, and Deb Haaland) declare that they were committed to the 30 GW by 2030 goal.

That includes Interior planning to lease new offshore sites for energy development and review 16 existing construction and operation plans that have been submitted for approval. Collectively, should these plans pass environmental and safety reviews, they will get the US two-thirds of the way toward the 2030 goal.

Biden is selling this as much as an economic stimulus as an effort to address climate change. The announcement estimates that meeting the target will require $12 billion a year in investment and support a large number of new jobs. These jobs will come from factories that will manufacture the turbine nacelles, blades, support towers, foundations, and power cables, as well as port facilities that will transfer all that hardware to the ships that install it. Many of the raw materials will end up sourced from elsewhere in the US, leading to some substantial estimates of new jobs.

Because of all that infrastructure, installations could potentially grow rapidly afterward. The administration estimates that successful completion of this decade’s plans would put the US on a path to have over 100 GW of offshore capacity by 2050. That’s close to our current total onshore wind capacity.

To get things started, the Interior Department announced that it was starting the process of designating Wind Energy Areas in the New York Bight, the roughly triangular-shaped piece of shallow coast stretching from southern New Jersey to the end of Long Island. The area is bisected by the deep water of the Hudson Canyon, and it sees extensive use by recreational boaters, commercial and recreational fishermen, and cargo ships. It’s also home to many fish species and marine mammals, including whales.

Despite all these competing uses, Interior has identified large regions that are likely to be appropriate for offshore wind development. The process is starting with an environmental assessment and a call for public comment on the wind plans.

Interior is also announcing that it is starting the preparation of an environmental impact statement for Ocean Wind, a planned 1.1 GW capacity farm slated for southern New Jersey. If approved, it would be the third pending project to clear that hurdle, after sites offshore of Massachusetts and Rhode Island. If approved, it will be the largest offshore wind farm in the US when completed.

Interior expects that it will start another 10 environmental reviews for similar projects this year.

Elsewhere, the Department of Energy will set aside $3 billion for loans dedicated to wind industry projects. It will also join the New York state energy agency (NYSERDA) in funding research on offshore infrastructure and support systems to try to help continue the trend of lower costs for offshore wind.

The Department of Transportation, meanwhile, will be allocating over $200 million for grants designed to encourage the construction of port facilities specifically designed to support offshore wind construction. And NOAA is working with commercial wind developers like Ørsted to develop a system where they can share data on ocean conditions and wildlife in order to make future developments go more smoothly.

With many excellent locations and essentially nothing already in place, plenty of companies are interested in starting the US market. And obviously, many states are interested in seeing the market develop as well. With the federal government and economics now lining up in support, it’s likely that this market is going to expand rapidly within the next five years. Whether it gets to the full 30 GW target, however, will likely depend on whether Biden (or an equally renewable-friendly candidate) comes out on top on 2024.