March 1, 2021 by arstechnica No Comments 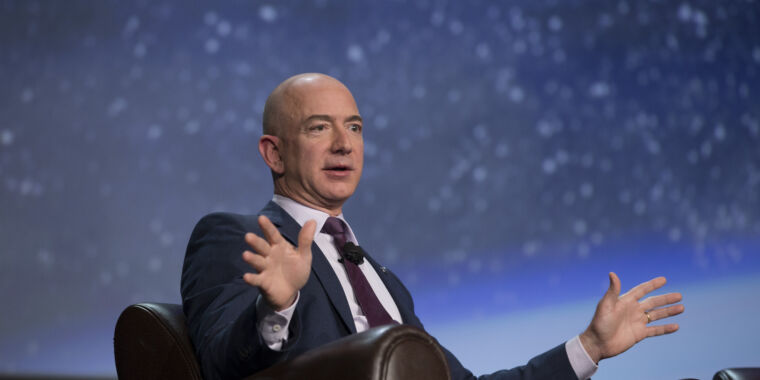 In the fall of 2017, shortly after he became chief executive officer of Blue Origin, Bob Smith received an extensive briefing on the state of the New Glenn rocket program. The projected launch date for the massive, reusable rocket was 2020, he was told.

As Smith assessed the progress on New Glenn to date and drew upon his long experience at Honeywell Aerospace, he soon came to the conclusion that this launch date was unreasonable. “This is not a 2020 launch program,” he said at this meeting. “This is a 2022 program, at best.”

Blue Origin founder Jeff Bezos was not present for this, but his response afterward was that he would absolutely not accept any revision to the launch date for the large orbital rocket. Blue Origin should be optimistic with its projections, Bezos said. And then they should meet those projections.

Bezos’ rocket company, of course, did not meet those projections. Not only did New Glenn not launch in 2020, last week Blue Origin said it would not launch until the fourth quarter of 2022, at the earliest. As part of its announcement, Blue Origin also did not take much blame for the rocket’s delay—instead, the company blamed the delay mostly on a potential customer, the US Department of Defense.

“Who does that?” asked one former employee of the company. “That excuse makes no sense.”

Blue Origin’s New Glenn project is incredibly ambitious. If successfully developed, it would offer a revolutionary heavy-lift service to low Earth orbit, geostationary space, and even the Moon. So what really has gone wrong? Ars spoke with several former employees and industry officials familiar with the company for this story.

As part of his overall space strategy, Bezos has been thinking about building a large, reusable orbital rocket for a long time. Step one was to learn how to reuse rockets with the much smaller New Shepard launch system, which consists of a single-engine booster and capsule. And the company’s engineers have—over the last five years, New Shepard successfully completed more than a dozen suborbital missions with picture-perfect rocket landings.

But long before New Shepard took its first flight, Bezos was already deep into planning his next rocket. During a meeting in December 2011 with then-NASA deputy administrator Lori Garver, Bezos discussed an orbital rocket capable of challenging SpaceX’s Falcon 9 booster. As Christian Davenport recounts in his book The Space Barons, Bezos told Garver at the time, “I want to tell you about my big rocket.”

The “big rocket” at the time—which would become known publicly as New Glenn more than half a decade later—was not quite so big as New Glenn is envisioned today. Rather than being powered by seven BE-4 engines and towering nearly as tall as NASA’s famed Saturn V rocket, Bezos originally envisioned a more modest-sized rocket comparable to the Falcon 9 or United Launch Alliance’s single-stick Delta IV. In some iterations, New Glenn had just three main engines.

This would have represented a more incremental step for a launch company that has yet to put a gram of material into orbit. But instead of offering a waypoint between New Shepard and a massive orbital rocket, Bezos ultimately opted to jump right to the massive, 313-foot-tall version. “It’s like if NASA had gone straight from Alan Shepard to the Saturn V rocket, but then also had to make the Saturn V reusable,” one former Blue Origin employee said.

Instead of crawl-walk-run, Bezos asked his engineering team to begin sprinting toward the launch pad. The engineering challenges of building such a large rocket are big enough. But because New Glenn is so expensive to build, the company needs to recover it from the outset. SpaceX enjoyed a learning curve with the Falcon 9, only successfully recovering the first stage on the rocket’s 20th launch. Blue Origin engineers will be expected to bring New Glenn back safely on its very first mission.

The decision to skip the “walk” part of the company’s development has cost Blue Origin dearly, sources say. The company’s engineering teams, composed of smart and talented people, are struggling with mighty technical challenges. And there are only so many lessons that can be learned from New Shepard—the smaller rocket has 110,000 pounds of thrust, and New Glenn will have very nearly 4 million.

It’s not just the challenging engineering. Since Smith arrived in the fall of 2017, some employees have struggled with his leadership style and complained that he has acted too slowly, pushing Blue Origin to become more like a traditional aerospace company than a nimble new-space startup. But from Smith’s perspective, he’s trying to implement a culture transformation, from a hobby-shop atmosphere to that of a major aerospace contractor that can go out and win major NASA and Defense Department contracts.

As a result, Blue Origin is now juggling a number of other major projects in addition to New Glenn. There is the ongoing effort to put humans onto suborbital New Shepard flights, which may happen as soon as late spring or early summer. This has been a long slog, as Bezos once suggested humans may fly on the suborbital launch system as early as 2017.

There is work on the BE-4 engine itself, which will ultimately power New Glenn. As part of its development process, Blue Origin engineers pushed through significant turbopump issues. Technicians and engineers are working hard to deliver flight-ready BE-4 rocket engines to United Launch Alliance, an important customer, by this summer. This is probably Blue Origin’s most immediate priority.

Blue Origin is also leading the “National Team,” which includes industry heavyweights such as Lockheed Martin and Northrop Grumman, that seeks to build a lander for human missions to the Moon. This is a heated, high-profile competition with two other bidders, SpaceX and a Dynetics-led team, and the prize is billions of dollars in contracts and enormous prestige in carrying astronauts down to the surface of the Moon. NASA is expected to pick one or two finalists in April to move forward. Bezos desperately wants to prevail here.

So how does Bob Smith manage these programs internally? Clearly, for now, New Glenn has taken a back seat. The vehicle’s delay to the fourth quarter of 2022—and let’s be honest, that means at least 2023—comes down to a combination of two things. First, there is the enormity of the engineering challenge, which is due to Bezos’ decision to opt for a larger New Glenn design. Secondly, Blue Origin simply has higher priorities right now.

The sources for this article agreed that none of this reflects a diminution of interest in space by Jeff Bezos, who remains the world’s richest person. He is a true believer in exploring the cosmos and feels as though it is his role to lay down the infrastructure that will allow humans to build factories in space, develop artificial worlds known as O’Neill cylinders, and to preserve Earth.

Bezos’ vision is compelling. He recently announced a decision to step away from Amazon, which will give him more time to work on Blue Origin and perhaps allow him to bring this vision into better focus.