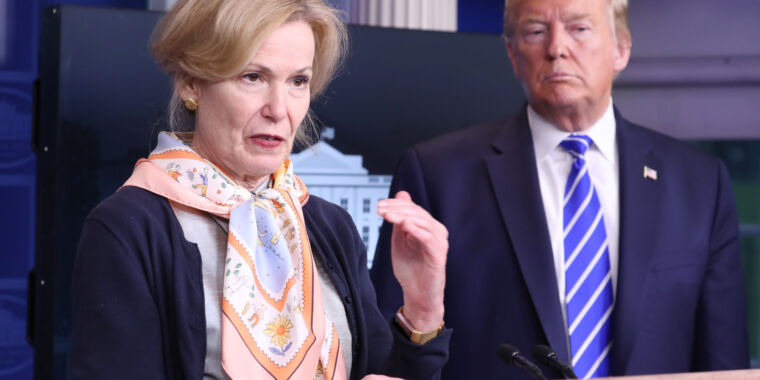 One of the most indelible moments of Deborah Birx’s controversial time as White House coronavirus response coordinator for the Trump administration came on April 23, 2020. That’s when she sat quietly to the side of the former president while he recklessly suggested that people could rid themselves of the pandemic virus by taking in or injecting themselves with hazardous disinfectants.

Since leaving the administration, Birx has spoken about how “extraordinarily uncomfortable” she was in the moment, telling ABC News recently: “I still think about it every day.”

But, at the same time that she was expressing that regret, Birx was also in the process of joining ActivePure—an air-cleaning company that makes products that could lead to people inhaling hazardous disinfectants or byproducts, all in the name of getting rid of the pandemic coronavirus.

Birx joined the Dallas-based ActivePure Technology as chief medical and scientific adviser, the company announced earlier this month. According to an investigation by Kaiser Health News, the company built its business making air purifiers that emit ozone, a disinfectant that can damage the lungs and exacerbate asthma when inhaled.

Though the company’s technology has evolved over the years and its marketing now repeatedly claims “no chemicals or ozone,” it still sells ozone-emitting air cleaners. In an interview with KHN, ActivePure Technology CEO Joe Urso said that ozone-emitting air cleaners account for 5 percent of the company’s sales. Several of its products cannot be sold in California, which banned the technology due to the health hazard.

The company’s non-ozone-emitting products are also troubling. Some of its portable air cleaners release hydrogen peroxide and other reactive oxygen species to try to rid air and surfaces of infectious germs, including SARS-CoV-2.

The Centers for Disease Control and Prevention specifically warns consumers to “exercise caution” with these types of cleaners. In general, there’s an absence of “peer-reviewed evidence showing proven efficacy and safety under as-used conditions,” the agency says. Substantiating this point, Urso told KHN that the safety and efficacy of its products had mainly been tested in lab conditions, not real-world settings.

The CDC explains that the air cleaners are not proven to be effective in actual rooms and classrooms, having a “less-documented track record when it comes to cleaning/disinfecting large and fast volumes of moving air within heating, ventilation, and air conditioning (HVAC) systems or even inside individual rooms.”

The agency also notes that safety is an open question as well. People will be exposed to the disinfecting agents when the cleaners are used, the agency says, potentially creating health risks from prolonged exposure. Hydrogen peroxide alone can cause irritation to the eyes, nose, skin, and throat. But, experts who spoke with KHN also noted that ozone, hydrogen peroxide, and other reactive oxygen species may react with other chemicals in the air, from things like car exhaust, paint, glue, and other cleaners. This could potentially produce harmful byproducts.

Children may be particularly sensitive to these types of exposures. However, ActivePure Technology and other companies specifically market products to schools and day cares, which are desperate for ways to reopen safely.

Brent Stephens, an indoor-air-quality expert at the Illinois Institute of Technology, told KHN that he advised the director of his own child’s preschool not to use the Aerus Hydroxyl Blaster, which uses ActivePure Technology. He noted the lack of good data on its safety and efficacy.

“It’s wild out there,” he wrote in an email. “Consumers need to know how these things perform and if they are subject to unforeseen consequences like generating byproducts from use.”

Instead of questionable cleaners, many experts and the CDC, endorse getting back to basic steps to improve indoor air quality. These include opening windows to let in fresh air, running fans to bring in more fresh air and improve circulation, using filters in HVAC systems, and considering portable air purifiers that use high-efficiency particulate air (HEPA) filters.