NASA lays out plans for its first flights on Mars 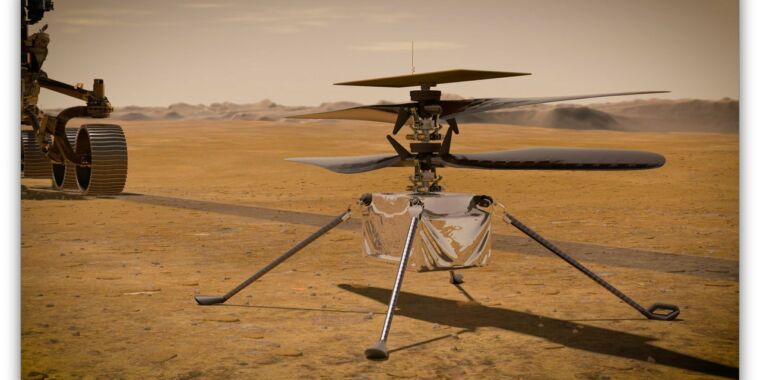 On Tuesday, the Jet Propulsion Laboratory (JPL) hosted a press conference where it detailed the plans for the Ingenuity drone that hitched a ride to Mars attached to the underside of the Perseverance rover. The scientists and engineers behind the drone announced that they’ve now picked a site for what is expected to be the first powered flight on another planet. With the site settled, they’re now targeting April 8 for the flight, which will be the first in a monthlong series of test flights to validate the technology.

Ingenuity, pictured above, looks familiar to anyone who’s seen any of the profusion of small consumer drones that have developed over the last decade or so. But, as Ingenuity’s chief engineer Bob Balaram put it, “It’s the first aircraft designed for powered flight on another planet,” and that makes for some substantial differences with Earth-bound drones. For starters, the hardware is much bigger than it might seem from the photos, as each of its two counter-rotating blades is 1.2 meters (four feet) long. Ingenuity also weighs in at 1.8 kilograms (four pounds) on Earth, although it’s less than half of that weight on the red planet.

Balaram also said that “In effect, this is an aircraft that also happens to be a spacecraft,” noting it had to survive the stresses of launch and landing, as well as the temperature extremes of its flight to Mars and time on the surface. That has necessitated a heating element in Ingenuity’s fuselage, which keeps things like the batteries and electronics operational overnight. Once released on the planet’s surface by Perseverance, Ingenuity will be responsible for providing its own power, which it obtains via a solar panel perched above the blades.

The fuselage contains some off-the-shelf components in the form of commercial lithium-ion batteries and a chip that might have been powering a smartphone that was current a few years back. Typically, NASA would use radiation-rated hardware for critical components of a scientific mission—but this is meant as a technology demonstration, and it isn’t going to be performing any mission-critical science. Instead, the drone is going to be providing a test of whether the technology is ready for use in future missions. Lori Glaze, director of NASA’s Planetary Science Division, suggested that future rovers might rely on drones to scout routes for them or obtain samples from areas that would otherwise be inaccessible to a wheeled vehicle.

While the weight of the components were undoubtedly heavily optimized, Ingenuity does contain a tiny piece of extraneous mass. Following their first powered flight on Earth, the Wright brothers sold small squares of fabric from their craft to get the funds they needed to build improved versions. One of those squares will be carried aloft on Ingenuity when it takes flight on Mars.

Håvard Grip, Ingenuity’s chief pilot, said that the test flights required two distinct areas, both of which needed to be flat. The inner part, which he called the airfield, had to have very little material that could interfere with landings. That needed to be surrounded by a larger area, called the flight zone, that had to have enough material in it that the drone’s onboard image-processing system could track individual features in order to assist with navigation.

Grip said the search for an appropriate area started within a few hours of Perseverance’s landing. That’s because knowing where Perseverance was helped Grip and his colleagues search satellite imagery of the surrounding area. Once the rover was operational, it provided higher-resolution imagery of potential sites.

In the end, things couldn’t be much more convenient, as the rover landed on what will be the edge of the flight zone, which extends north from the landing site.

But that doesn’t mean the procedure from here on out is simple. The rover will need a few days to drive to the airfield within that area, and deploying Ingenuity itself will take a few more days. At present, the drone is tucked against the underside of the rover, and images have confirmed that the debris shield that protected it during landing has dropped off. Once on site, Ingenuity will have to be rotated 90 degrees and have its legs deploy before it can be deposited on the Martian surface; each step in that process will be monitored for success before moving on to the next. Farah Alibay, who is coordinating the rover team’s support of the test, called the final drop the “most stressful” part of the process.

Assuming the drone ends up upright on the surface, the next key step will be getting the rover out of there quickly, as Ingenuity only has enough battery capacity to power a heating element overnight. Charging from its solar panel will be essential. Perseverance will retreat to a location a distance from (and a few meters above) the airfield in order to monitor the test flights.

While Perseverance clears out, the drone will start a weeklong commissioning project, where its onboard hardware and sensors will be checked out. Assuming all of that checks out, there’s good reason to think that we’ll manage to get the craft up into the thin Martian atmosphere. After all, a mock-up has flown in a chamber that’s able to match Martian conditions here on Earth (though Balaram showed a video of some early test versions that failed via some dramatic crashes).

Grip said the first flight will involve a takeoff, a climb to three meters, a brief hover, and then a landing. Balaram said that each ensuing flight will be “progressively more aggressive,” but there’s a limit to how far aggression can go when the onboard batteries limit flight time to about 90 seconds. All told, five flights are planned, with a maximum altitude in the area of five meters.

While the thin air of Mars makes getting sufficient lift a challenge, it actually lowers the risk of losing the rover during the test period. If Ingenuity were to topple over due to winds (either while flying or parked), there’s no obvious way to recover it. But Balaram said that the thin Martian air is unlikely to generate enough force to cause this sort of problem.

The drone will have a relatively low-bandwidth connection back to the rover, so we probably shouldn’t expect video from every single flight. But a key aspect of the flight will be figuring out how well the system can navigate using optical data and whether it would be capable of scouting routes for the rover. So we can definitely expect a fair number of pictures from these efforts.

Not too much longer. If everything goes well with depositing Ingenuity and its systems check out, the earliest we could see a flight is in two weeks, on April 8. A month has been set aside for five flights, with extensive checkouts of the system between each. During this time, however, Perseverance won’t be able to move on to its main science mission.

It’s not clear what will happen if the hardware clears all its engineering tests and is still in good working condition. Obviously, delaying the rover’s science mission to keep testing it further won’t go over especially well, and nobody at JPL was interested in speculating what they’d do with a fully functional Mars helicopter that would otherwise be abandoned—and that’s not because reporters didn’t ask them to speculate.

But for the next month and a half, the focus will be on getting everything set for the tests and getting them done.