This startup has an intriguing concept for EV battery swaps

March 3, 2021 by arstechnica No Comments 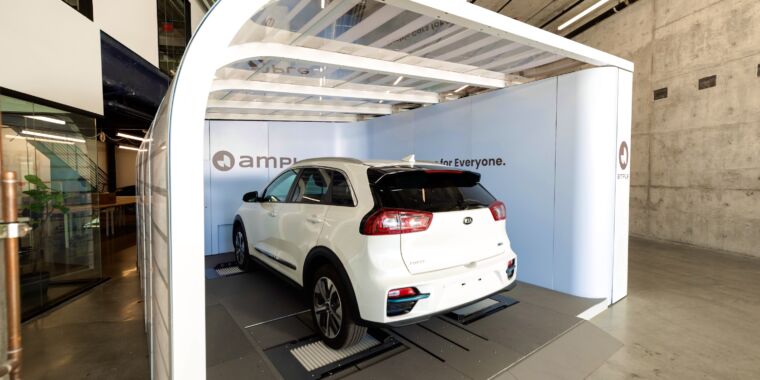 A startup called Ample has developed a new modular battery and quick-swap station, and it just deployed the first five in the Bay Area.

On Wednesday morning in San Francisco, a startup called Ample launched its new electric vehicle battery-swap technology. The company has designed an extremely small footprint for its swap stations, which only occupy as much ground as a couple standard parking spaces and don’t need much in the way of electrical infrastructure. So instead of building one big location able to handle hundreds of cars a day, Ample’s plan is to build numerous small stations, which can be deployed quickly. The first five of these are now operational in the Bay Area, servicing a fleet of Uber EVs equipped with Ample’s modular battery system.

Rightly or wrongly, charging times and charging infrastructure are probably the biggest stumbling blocks to widespread electric vehicle adoption. Since the creation of the first gas station in 1905, society has become accustomed to rapidly refueling with liquid hydrocarbons. As a result, no one minds if their V12-powered grand tourer can’t make it 200 miles before stopping, since they know they’ll only be stationary for a few minutes.

Battery EVs, on the other hand, need to be sold with as much battery as can be crammed underneath the cabin, and even the fastest-charging BEVs currently on sale still take more than 20 minutes to charge back to 80 percent—and even then only with 350 kW fast chargers that are still relatively uncommon.

The idea of slow-charging EV batteries and then quickly swapping spent packs for fresh ones is not exactly new. In 2007, Better Place tried to make the idea work, but EVs were too much in their infancy, and Israel was too small a market for that to happen. Tesla tried it, too, with a single experimental station midway between Los Angeles and San Francisco that started testing in 2013. This was meant to swap a pack in 90 seconds but in practice took up to 15 minutes, and it was rendered irrelevant by the success of the Supercharger network. And in China, Nio has 131 battery swap stations that completed more than a half-million battery swaps by August of last year.

“The moment you break the battery into smaller modular pieces, a lot of things become easier,” said Khaled Hassounah, one of Ample’s co-founders. “One of them is the station becomes a lot simpler. So our station actually needs no construction, no digging in the ground. All we need is a couple of parking spots that are flat enough, and then within a few days—typically a week—we can get a station up and running. Literally, everything is flat pack shipped, we assemble it on site, test it, turn it on, and we have the swapping station. And that’s why we’re able to serve the whole Bay Area, for example, with multiple stations in a matter of a few weeks,” he told me this morning.

By now, many of you are probably thinking the same thing I thought when I first heard about the idea: wouldn’t this require significant re-engineering of an EV?

“That’s a logical conclusion, or prediction, of how it would work. But we sought to change that in two fundamental ways,” Hassounah explained. “One of them is, because our batteries are modular, we really don’t have a format that we need the automakers to adapt to or that has to fit into all of the available systems. Instead, we build what we call an Ample adapter plate.”

Ample gets the specs of a battery pack from an OEM, then designs a structural frame for the pack that can accept its modules while still meeting all the same engineering requirements as the OEM pack. “That has the same shape, the same bolt fasteners, the same connector as the original battery,” Hassounah said. Since the modules are already developed, Ample just has to develop a new adapter plate for each new model of EV that it supports.

But since the modules are always identical, that means the stations can service different makes of EV, and it simplifies the swapping process. “Typically, you have the high-current connector, you have the big bolts that are holding most of the weight, and all that needs taking out. In our case, we’re just removing modules in protective buckets, but the big structural piece that connects to the cooling and the high power and all that always stays in the car,” he told me.

“The second thing we had to build is the [cell] chemistry changes slightly between vehicles, and the first two years of Ample were just focused purely on that problem before we even built any robots. We build a layer of power electronics in our battery modules—the key is it’s flexible enough but cheap enough that it doesn’t change the economics of the battery in any meaningful way. That allows the battery to now adapt to the vehicle but also abstract the chemistry,” he explained.

Each new type of EV requires a little software work to get Ample’s battery talking to the car, but Hassounah told me that there’s plenty of similarity, despite what the OEMs might say. “When you talk about the communication between the battery and the car, it’s very basic. There are five things all of them communicate: voltage, current, temperature, maximum power, and maximum regen. And of course, the sequence to turn on and turn off. But as long as the OEMs are working with you, it simply takes a couple of weeks to update our software,” he said.

What if I get someone else’s degraded battery?

One oft-heard concern about battery swaps (usually in the context of Tesla’s failed experiment) was the problem of Someone Else’s Battery. No one wants to turn up at a swap station to exchange their brand new, charges-to-100-percent battery for someone else’s pack that only goes up to 80 percent. Ample’s model is more akin to propane tanks you might use with a grill—it owns the modules, which it leases to customers. That way, you’re never stuck with someone else’s lemon.

“That actually reduces the cost for everyone because it allows us to distribute the risk and say Ample makes sure it maintains the quality but also distributes the risk so no one ends up with a $20,000 bill,” Hassounah said.

There’s also the tantalizing possibility of vehicles that gain more range over time, beyond the improvements that are possible with software updates. That’s because Ample can update the chemistry or design of its modules and roll them out to vehicles already on the road. What’s more, the modularity means that end users can have some flexibility with how many kilowatt-hours—and therefore how much extra mass—they need for a given journey. Range anxiety—whether it exists or not—means that most people want an EV with the biggest possible battery and greatest theoretical range, even if they only conduct a road trip once a year.

“So a lot of your energy is spent moving the battery around, even though you don’t need it. With modularization, you can choose how many modules you’re going to put in the car,” said John de Souza, Ample’s other co-founder. Instead of buying a car with 300 miles of lithium-ion aboard, a customer might choose to carry around half as many modules for day-to-day driving, then add extra modules when necessary.

For the time being, those customers will be fleets, not individual drivers. Here in the US, Ample is working with Uber, which is renting a fleet of Ample-equipped EVs to Uber drivers in the Bay Area. And Hassounah and de Souza told me that there are pilot deployments in the works for Europe and Japan.