April 7, 2021 by arstechnica No Comments 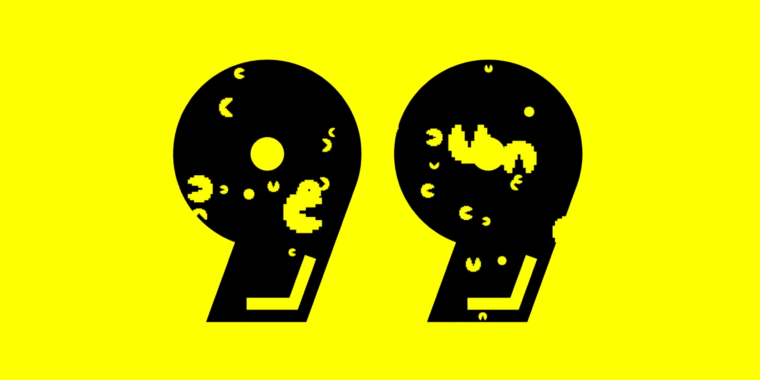 First Tetris, then Super Mario, and now Pac-Man: Nintendo Switch continues its streak of “retro battle royale” video games this week by asking a remarkably weird question. What would Pac-Man be like if 99 people played the game at the same time, and only one pellet muncher emerged victorious?

The new game, creatively titled Pac-Man 99, arrives on the evening of Wednesday, April 7, as a free download for paying subscribers to the Nintendo Switch Online service. Its resemblance to 2019’s Tetris 99 and 2020’s Super Mario 35 is no accident, since it has been designed with the same “NintendoWare Bezel Engine” used in those other games—and that framework appears to cleverly juggle simultaneous sessions of competitive Pac-Man.

As seen in the game’s surprise reveal on Tuesday evening, Pac-Man 99‘s default online mode resembles the oldest-school version of Pac-Man, in terms of chasing ghosts and chomping yellow dots on the series’ earliest black-and-blue maze. Like Tetris 99 before it, Pac-Man 99 plays a lot like its traditional source material, only with fields of online players interfering with each other’s progress. You send attacks to other players’ fields (visible on the screen’s edges as smaller windows) by eating power pellets and then devouring vulnerable ghosts. They do the same to you.

This game’s twist is a new idea for the series. Your attacks send waves of “jammer Pac-Men” to opponents’ fields (visible on the screen’s edges as smaller windows), but those don’t cause direct harm. Instead, these transparent Pac shadows litter the game’s mazes as speed bumps, and players must maneuver Pac-Man through their quicksand lumps to make them disappear. One or two jammers are tolerable; six or more seem like a real headache, especially when Inky, Blinky, Pinky, and Clyde pin you in a corner.

Thus, success in Pac-Man 99 will hinge in part on plotting your maze movement in a way that lets you safely clear jammers and keep your speed high. Sending attacks to other players, meanwhile, requires creating “ghost trains,” which have been lifted from the Pac-Man Championship Edition series. Set up these screen-filling series of ghosts without accidentally bumping into them, then eat a power pellet so you can gobble dozens of ghosts in neatly arranged rows.

Players also get access to three selectable “boost” modes, dubbed “strength,” “speed,” and “train,” and while they seem self-explanatory enough, we’ve yet to see when and how they’re toggled in the game or whether they make the basic act of ghost-dodging more fun or not.

Ninten-does what Stadia doesn’t quite

Weirdly, this isn’t the only online Pac-Man concept to launch in the past year. Pac-Man Mega Tunnel Battle debuted on Google Stadia in October 2020, but its 64-player take revolves around much larger fields of dots where players can bump into each other. In my testing experience, Mega Tunnel Battle can prove laggy and jumpy when other online players’ connections degrade for any reason. Since Pac-Man 99 keeps each player in their own isolated playfield, it may neatly sidestep such issues.

I’ve previously lauded Tetris 99 as an ingenious, challenge-boosting twist to the familiar Tetris formula. While we weren’t necessarily as hot on Super Mario 35‘s similar twist the following year, it was a fun lark—albeit a temporary one, since Nintendo shut that game’s servers down on March 31, the same day it delisted Super Mario 3D All-Stars. (We hardly knew ye, Mario.) Pac-Man 99 looks like it hews closer to the Tetris 99 side of things, which bodes well for the free-with-subscription game launching later today.