April 9, 2021 by arstechnica No Comments 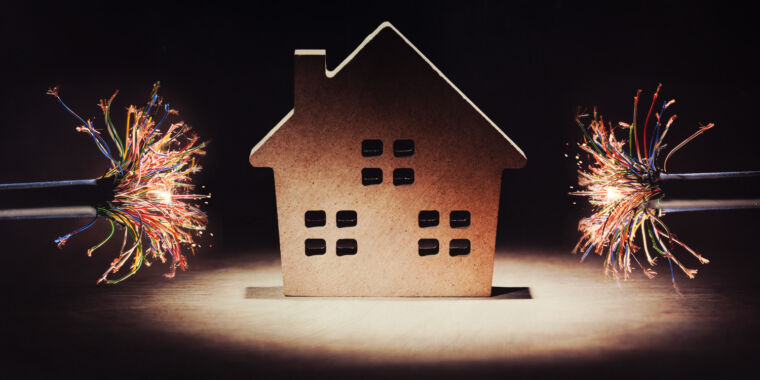 When Edward Koll and his girlfriend, Jo Narkon, bought and moved into a new house in Draper, Virginia, in late September 2020, they had every reason to think that Comcast Internet would be readily available.

They had done their due diligence before buying the house, plugging the address into the Comcast website to make sure it had cable Internet and contacting Comcast directly to make extra sure. Both the Comcast website’s availability checker and a Comcast sales rep confirmed to them that the house had service.

But Comcast had given the couple false information because of an error in its coverage map, and it didn’t tell the couple about this mistake until after they bought the house. That was over six months ago, and Koll and Narkon still don’t have home Internet service.

“It wasn’t until after we closed on the house that Comcast finally notified us that we were in a ‘dead zone,'” Koll told Ars when he first contacted us on February 12, 2021. “The ends of our street are hooked up, but the middle where we live does not have the service pedestal.”

This wasn’t the first time that Comcast, the nation’s largest cable company, has falsely told customers that service would be available.

Even though it was Comcast’s fault, the company demanded $5,000 up front to extend its network to Koll and Narkon’s house. The couple eventually paid up in late November after determining it was the only viable option. But while Comcast initially promised service within 90 days of receiving the $5,000 payment, it failed to complete the project in that time frame.

Comcast now says the project will finally be completed by April 15, over six weeks after the original 90-day estimate passed on March 2. The couple has been using mobile hotspots for Internet access the entire time they’ve lived in the house because of Comcast providing false availability information and then failing to complete the installation on time.

Comcast: “[We] did not live up to our standards”

“Mr. Koll’s experience did not live up to our standards and we are very sorry for the inconvenience this has caused, therefore, we will be applying a credit to his account equal to $5,000,” Comcast told Ars on March 29, after a few weeks of back-and-forth communication.

“The shocking part of it was Comcast’s refusal to even own this,” Koll told Ars in a phone interview last week, after Comcast agreed to the $5,000 credit. “They just kind of brushed it off and we really did not get any traction on this until we reached out to you [at Ars].”

A Comcast rep called the couple yesterday to confirm that service will be installed on Thursday, April 15, sometime between 8 am and 10 am, Koll told us. Even after that call, Koll said he is “not convinced” the project is far enough along to be finished by then. But they’ve ordered Internet, TV, and phone service, and the couple is switching their cell phones over to Comcast’s mobile service. The total price is estimated at $249 a month, Koll said. At that price, the $5,000 credit will last about 20 months. Virginia is one of the states where Comcast reluctantly agreed to delay data-cap enforcement until 2022.

Between emails, phone calls, and in-person visits, Koll said he had dozens of contacts with Comcast over the past six months to try to sort the mess out. “Comcast said, ‘yeah, our agents told you that service was available and they promised you that it was right there at your doorstep, but they were wrong,'” Koll said.

One installer arrived at the house and, Koll told Ars, “said, ‘I need to go find out where your service line is,’ and then he disappeared. He never came back. And then we had two other installers and there was finally the third guy who said, ‘You don’t have a service pedestal close enough and you’re looking at a hefty bill just to have it installed.'”

After hearing Comcast’s demand for $5,000, Koll complained to the FCC, but the agency “followed up with Comcast and accepted their explanation without comment,” Koll told Ars. Koll said he also contacted the offices of US Sens. Tim Kaine (D-Va.) and Mark Warner (D-Va.) without any results.

Gigabit Internet “is available for your address”

Koll provided Ars a copy of the $5,000 invoice dated November 30 along with chat and email transcripts from conversations he had with Comcast.

In an online chat before they bought the house, Koll asked a Comcast rep to verify that gigabit Internet service and cable TV would be available. The rep told him that “the Gigabit Speeds Internet plan is available for your address” and that a 2-year contract would cost “$169.99/mo plus equipment, taxes, and fees.”

The rep told Koll to order service five to eight business days in advance in case cable needed to be run to the house, making it sound like it would be an easy process and not a six-month ordeal. But the Comcast rep was wrong because Comcast’s system was providing false information. Koll placed an order for Comcast service over the phone on August 25, and the couple closed on the house on September 24, moving in the same day. Even when accepting the order, Comcast didn’t realize that it hadn’t extended its network close enough to the house to provide service.

On November 1, 2020, Koll replied to an email from a Comcast rep in the executive customer relations department and pointed out that Comcast’s service map showed his address as having service. Koll’s email also pointed out that he had placed an order for service on August 25 “and at the same time put a deposit into the account so that service would be installed on or before closing on this house.”

“Given the multiple assurances from Comcast for service and the lengthy delays we have already endured, I anticipate a quick resolution to this matter,” Koll wrote in that email.

But there was no quick or cheap resolution. “We reluctantly agreed to pay $5,000 in November to have the service pedestal installed despite Comcast’s earlier promises regarding existing service availability,” Koll told Ars, months later.

Koll first contacted us after reading one of our articles about a 90-year-old AT&T customer, Aaron Epstein, who bought an ad in The Wall Street Journal to complain about AT&T’s slow Internet service. At the time, Koll wasn’t sure that Comcast would install service at all.

“We really need help, similar to Mr. Epstein,” Koll told Ars in his first email to us. “We need to get the service we were promised installed. We would like to have the $5,000 back, but at this point are willing to accept that as a credit towards future bills. Comcast has offered two free months, which does not come close to the amount we have paid.”

Although Comcast later agreed to a credit equal to the full amount they paid, the company did not tell us why it won’t refund the $5,000 instead of providing it as a bill credit. That essentially means they had to pay $5,000 in advance for about 20 months of service, an initial expense that new Comcast customers normally would not have to pay.

In late March, Comcast finally updated its coverage map and online availability checker to correctly show Koll’s address as unserved. So why did Comcast’s website and a Comcast sales rep falsely tell Koll that service was already available at the home?

“This is not a common occurrence and we have to look into these instances on a case-by-case basis,” Comcast said. “For this specific address, it was included in a database from a company we acquired many years ago. Our local teams are planning a further review of that regional database.”

Cable companies have failed for years to develop more accurate service maps. The cable industry’s biggest lobby group fought against requirements to submit address-level data to the Federal Communications Commission, telling the FCC in 2017 that it’s too difficult and expensive to figure out exactly where they can and can’t offer service.

The FCC finally ordered ISPs to submit geospatial maps of where they provide service in 2019, but then-FCC Chairman Ajit Pai did not finish setting up the new system before leaving office in January 2021. Upon taking over from Pai, acting FCC Chairwoman Jessica Rosenworcel learned “that we had a lot of work to do and hadn’t yet begun many of the steps required to actually build a collection system,” she wrote.