April 2, 2021 by arstechnica No Comments 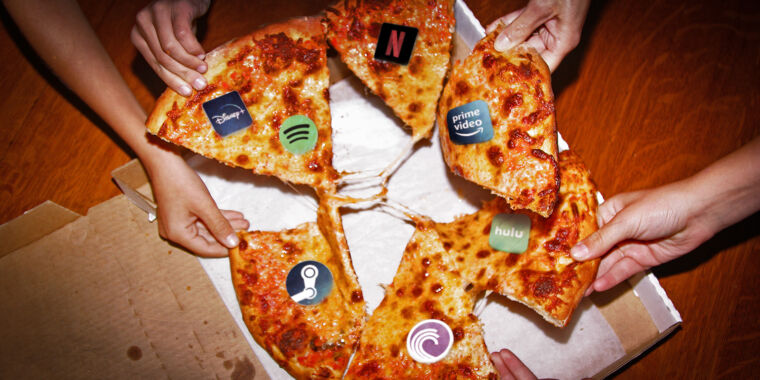 Cable company WideOpenWest (which markets itself as WOW!) yesterday told customers that it is imposing a data cap and explained the change with a pizza analogy that would seem more appropriate for a kindergarten classroom than for an email informing Internet users of new, artificial limits on their data usage.

The email said WOW is “introducing a monthly data usage plan for your Internet service on June 1, 2021” and described the system as follows:

Imagine that the WOW! network is a pizza. Piping hot. Toppings galore. Every WOW! customer gets their own slice of pizza, but the size of their slice is dependent on their Internet service plan. While customers who subscribe to 1 Gig get the largest slices, those with Internet 500 get a slightly smaller piece, and so on. But, it’s all the same delicious, high-speed pizza that you know and love.

Now, say you’re not full after your slice and you grab another. That extra slice is like a data overage. Don’t worry—we got extra pizza… umm, data… just in case. If you exceed your data allowance, we’ll automatically apply increments of 50GB for $10 to your account for the remainder of the current calendar month. Total overage charges will not exceed $50 per billing statement no matter how much data you use. Even better—the first time you experience a data overage, we’ll proactively waive fees.

The email did not mention that, unlike pizza, Internet data doesn’t run out and that there is plenty for everyone as long as a network is properly constructed and provisioned. And despite paragraphs of comparing data to pizza, the email literally never says how much data customers will be allowed to use before they are charged extra. The answer is in a newly updated “network management practices” document that says the monthly cap will range from 1TB to 3TB: the 50Mbps download plan gets 1TB, plans between 100 and 300Mbps download speeds get 1.5TB, the 500 and 600Mbps plans get 2.5TB, and the gigabit plan gets 3TB.

The document also points out that “[t]he amount of bandwidth usage of Customer’s account is the sole responsibility of Customer, whether or not such usage was by Customer or authorized by Customer.”

One Ars editor got the data cap email yesterday, and a reader named Shaun who received it forwarded it to us as well. Both live in Illinois, which seems to be the first and so far the only state getting the WOW cap.

“The pizza thing was making me confused if it was an April Fools’ Day joke or not, it’s so cringey,” Shaun told us. He also said that WOW has consistently failed to deliver the advertised 50Mbps upload speeds on his 500Mbps download plan. “WOW’s sole advantage over Comcast was no data cap, until now,” Shaun said.

WOW has over 800,000 Internet customers in parts of Alabama, Florida, Georgia, Illinois, Indiana, Michigan, Ohio, South Carolina, and Tennessee. It’s not clear when customers in states outside Illinois will have to endure the data cap. The network management practices document says the data cap is for “some service areas.”

WOW used to boast about not having data cap

Data caps are widely loathed by Internet customers, and ISPs that don’t impose them are quick to tout that fact to show how consumer-friendly they are. WOW did exactly that in June 2017 when it issued a press release titled, “WOW! Internet, Cable & Phone Takes Consumer Side in Data Cap Debate.”

WOW “today reinforced its commitment to continue providing data‐cap free Internet to all of its users, ensuring a better consumer Internet experience that is fast, reliable, and the best value in the market,” the company said at the time. “Consumers can use their WOW Internet how they want it, when they want it, with no limit—how Internet should be.” Unlike yesterday’s email, this 4-year-old announcement was written in a way that suggests at least somebody at WOW then knew that typical Internet users understand Internet data is nothing like pizza.

We asked WOW numerous questions today, including why it no longer “takes [the] consumer side in [the] data cap debate.” We’ll update this story if we get answers.

Comcast, the biggest Internet provider in the US, imposes a data cap in 27 of the 39 states it operates in. Comcast announced it would expand the cap to the rest of its territory starting in January 2021 but delayed that plan until 2022 after facing pressure from customers and lawmakers.

Yesterday’s email to customers seemed to hint that the WOW network is having trouble serving everyone:

Why are we doing this? It’s simple, really. A monthly data usage plan ensures that every WOW! customer has a consistent Internet experience. To put it in pizza terms: it’s so everyone gets the amount they ordered (or the amount to satisfy their hunger).

One of the questions we asked WOW is whether the above paragraph means that it has not been able to provide “a consistent Internet experience” without a data cap. But WOW previously claimed that its network is robust enough to handle increased usage during the pandemic even without data caps, saying on May 19, 2020 that “WOW!’s robust broadband network has the capacity to handle increased usage, including video streaming, as more people work and learn from home. The network is designed to deliver consistent, high-performing connectivity without disruption and without imposing data caps.”

The email to customers mentioned nothing about unlimited data. The network management practices document says that “[u]nlimited data plans may be added for an additional monthly charge” but doesn’t say how much it will cost.

“The Unlimited data option is not available for all service plans or packages,” the WOW document said, without specifying which packages the unlimited option is available for. It’s not even clear whether customers in Illinois who are the first to get the cap will be offered the unlimited-data option. One customer who contacted the billing department yesterday wrote on a DSLReports forum, “There is apparently no current plan to have an ‘actually unlimited’ plan or option.”

The email to customers said that usage of WOW! tv+—a streaming service the company offers—”won’t count toward your data usage plan.” This data cap exemption is called zero-rating, a practice that faces some restrictions under a California net neutrality law but not in the rest of the US. For example, the California law prevents ISPs from zero-rating their own streaming video services if they don’t also zero-rate video streaming services offered by other companies.

Update: WOW sent a slightly more detailed email to customers about four hours after this article was published. The new email included the sizes of the data caps for each speed tier but did not make any mention of an unlimited-data option and said that customers “cannot opt out of data plans.” WOW’s new email also said that “Data plans have become an industry standard that ensure all customers have a consistent and reliable experience,” but—obviously—WOW did not mention that many other ISPs do not impose data caps.

“Time to flood the FCC with complaints”

A bunch of WOW users have been complaining about the data cap in the DSLReports forum since the email went out yesterday.

“Time to flood the FCC with complaints,” one person wrote, noting that the WOW email didn’t disclose the size of the data caps, that WOW is imposing the caps in a pandemic with less than 90 days notice, and that it is “using caps in lieu of proper maintenance and upgrades.”

Several customers reported that the link to check data usage provided in yesterday’s email is broken, but one person wrote that “if you log in manually and then click the services tab it shows data usage (at least for me).”

Even worse than a bad April Fools joke

People in the DSLReports forum briefly debated whether the email was a bad April Fools’ Day joke. “Are you guys sure you’re not falling for an April Fools joke? I heard there was something about pizza in the email,” one person wrote. However, yesterday’s update to the network management practices document makes it clear that it’s not a joke.

One user called WOW and talked to a customer service rep who “wasn’t aware of any of this and had to go ask his supervisor.” After consulting with the supervisor, the rep confirmed to the customer that the data cap is real.

“I’m stunned they would email this on April Fools’ Day,” the user wrote. “There were broken links in my email and other indications that made me think this must be a joke. Par for the course with WOW.”

“Announce data caps right after increasing prices and on April Fools’ Day no less, nice… I also learned that according to their site I am being ‘rewarded’ as a longtime user by now having the privilege to pay $19 more per month than the current ‘regular’ price for my tier,” another user wrote.

“I understand the need to prevent people from abusing the network, but implementing caps during a time where the entire world needs (and depends) on Internet more than ever is an insult,” another wrote.

“Well there goes my Plex server,” another lamented.

The WOW email to customers said that the average user “will consume far less data than their plan allows and only a small percentage will ever be impacted by overage fees. This small percentage includes behaviors like using servers or file-sharing applications that consume extreme amounts of data… the vast majority of WOW customers will not be impacted by overage fees.”

But data usage has risen quickly in the pandemic with one study finding that 14.1 percent of US Internet subscribers used over 1TB of data per month in Q4 2020, up from 7.3 percent in Q4 2019.

“I have used anywhere between 700GB and 1.1TB (per month) over the past 12 months in a household of 5,” a Comcast customer wrote in the DSLReports thread. “That’s with purposely limiting (reducing quality options in streaming apps, disabling auto updates on games and software, etc) to prevent hitting Comcast’s cap (1.2TB).”

Here’s a screenshot of the email WOW sent to customers yesterday: