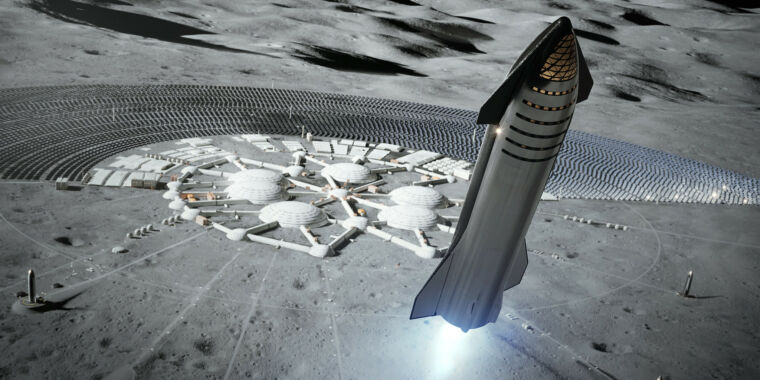 When NASA astronauts return to the Moon in a few years, they will do so inside a lander that dwarfs that of the Apollo era. SpaceX’s Starship vehicle measures 50 meters from its nose cone to landing legs. By contrast, the cramped Lunar Module that carried Neil Armstrong and Buzz Aldrin down to the Moon in 1969 stood just 7 meters tall.

This is but one of many genuinely shocking aspects of NASA’s decision a week ago to award SpaceX—and only SpaceX—a contract to develop, test, and fly two missions to the lunar surface. The second flight, which will carry astronauts to the Moon, could launch as early as 2024.

NASA awarded SpaceX $2.89 billion for these two missions. But this contract would balloon in amount should NASA select SpaceX to fly recurring lunar missions later in the 2020s. And it has value to SpaceX and NASA in myriad other ways. Perhaps most significantly, with this contract NASA has bet on a bold future of exploration. Until now, the plans NASA had contemplated for human exploration in deep space all had echoes of the Apollo program. NASA talked about “sustainable” missions and plans in terms of cost, but they were sustainable in name only.

By betting on Starship, which entails a host of development risks, NASA is taking a chance on what would be a much brighter future. One in which not a handful of astronauts go to the Moon or Mars, but dozens and then hundreds. In this sense, Starship represents a radical departure for NASA and human exploration.

“If Starship meets the goals Elon Musk has set for it, Starship getting this contract is like the US government supporting the railroads in the old west here on Earth,” said Rick Tumlinson, a proponent of human settlement of the Solar System. “It is transformational to degrees no one today can understand.”

We will nonetheless try to understand some of the ways in which Starship could prove transformational.

1. Starship ahead of schedule

Ahead of NASA’s announcement on April 16, I did not expect SpaceX to receive the only, or even the largest, award from NASA this early on in the lander-development process.

About a year ago, NASA selected three different bids for a Human Landing System. Over the course of 10 months, each of the three contractors fine-tuned its design and worked with NASA engineers to explain how its lander could meet the space agency’s needs. A team led by Blue Origin submitted the most conventional design, tailored to NASA’s request for a three-stage lander. Dynetics proposed an innovative lander, with a nod toward reusability, but it was also sized to bring just a few astronauts to the lunar surface.

SpaceX, by contrast, submitted a version of its Mars vehicle as a lunar lander. For the last five years, SpaceX has largely self-funded development of Starship as the reusable upper stage of a massive rocket, Super Heavy. The vehicle is intended to take dozens of people to Mars at a time in a six-month voyage. Thus, Starship is massively oversized to take two or four astronauts down to the surface of the Moon. But of the three landers, it is the only one with a direct path toward full reuse.

Starship is also the most technically demanding of the three vehicles because of its size and aspirations. Among the biggest hurdles are learning to land Starship, both on the Moon and back on Earth. And to conduct missions to the Moon and beyond, SpaceX must develop the technology to refuel Starship with methane and liquid-oxygen fuel in low Earth orbit.

“One of the hardest engineering problems known to man is making a reusable orbital rocket,” SpaceX founder Elon Musk told me about a year ago. “It’s stupidly difficult to have a fully reusable orbital system.”

Because there are so many technological miracles needed to validate the Starship design, I felt that NASA would not fully commit to the SpaceX vehicle as a potential lander until it had flown. Perhaps launching Starship into orbit would be enough of a technology demonstration for NASA. Or maybe SpaceX would have to land one on the Moon. This perceived need to demonstrate the viability of Starship is one reason why Musk and SpaceX have built and launched Starships at such a frenetic pace in South Texas during the last year. Only by doing, the thinking went, would NASA believe in Starship.

Instead, NASA has committed to the ambitious program even before Starship has safely landed after a high-altitude flight test. In this sense, NASA’s support for Starship has come ahead of schedule.

After seeing SpaceX launch more than 100 rockets over the last decade, what has become abundantly clear is that its engineers are now the best in the world at designing, building, and flying new and innovative rockets. The execution of the Falcon 9 program, proving out first-stage reuse, and development of the Falcon Heavy rocket attest to this.

But building great rockets is one thing. It is another thing to develop all of the other capabilities needed to ensure that humans can travel to Mars, land on the red planet, and survive there.

When it comes to in-space activities, SpaceX has leaned on NASA’s expertise for Crew Dragon as part of the commercial crew program. And with respect to the kinds of technologies needed for long-duration travel to Mars, through deep space, SpaceX has limited experience—there is very little recycling of air, water, and other consumables on a Crew Dragon spacecraft. NASA, on the other hand, has been working on these problems for more than a decade with astronauts on the International Space Station.

The space agency has also been conducting studies of Moon and Mars missions for decades, said Abhi Tripathi, who worked as a systems engineer at NASA from 2000 to 2010 performing these kinds of analyses. Tripathi left NASA to work at SpaceX on the cargo and crew versions of the Dragon spacecraft until 2020, when he moved to the University of California, Berkeley.

NASA and SpaceX collaborating this early on Starship also helps with a host of other issues not related to transportation. A government agency will be needed to facilitate the development of nuclear-based power for the surface of Mars, for example. And any human missions to Mars will raise planetary protection questions and other international concerns. Having NASA alongside SpaceX means the US government will help address all of these issues.

Suddenly, human landings on Mars about a decade from now seem a lot more realistic.