April 1, 2021 by arstechnica No Comments 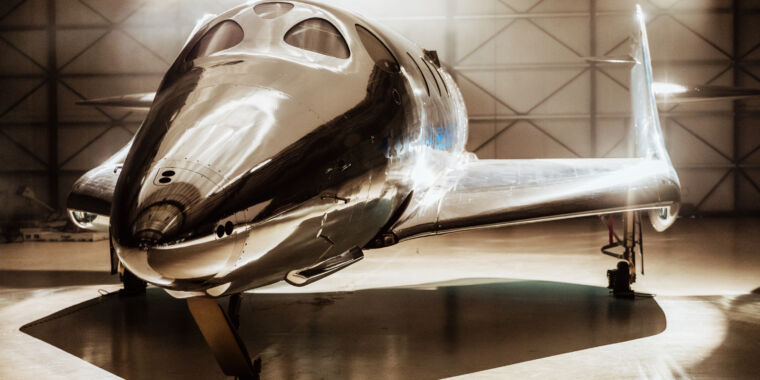 Two developments this week show how US companies are making slow but steady progress toward ushering in an era of space tourism.

On Tuesday, Virgin Galactic released images of its next-generation suborbital space plane. A few hours later, the two final crew members of an all-private mission aboard a SpaceX Crew Dragon spacecraft were publicly named. None of this is happening as quickly as we might hope, but we are slowly moving toward the day when more and more “regular” people can go into space.

First we’ll look at the specifics of these announcements. Then we’ll discuss their significance.

Early on Tuesday, Virgin Galactic unveiled the newest vehicle in its fleet, named VSS Imagine. The first in the “SpaceShip III” line of spacecraft, it represents an upgrade from the current VSS Unity vehicle that Virgin Galactic is testing.

According to Virgin Galactic, the new vehicle has been optimized to limit the mass of its structure—and therefore the overall weight of the vehicle. The company anticipates a performance increase that will allow VSS Imagine to carry six passengers on short suborbital flights, whereas VSS Unity can carry only four customers in its main cabin.

Testing of VSS Imagine could begin this summer, and the company has begun manufacturing another similar spacecraft, VSS Inspire. These two spacecraft, which are intended to fly with less maintenance, are part of Virgin Galactic’s goal of reaching 400 flights per year.

In addition to a lower overall mass, the SpaceShip III line of vehicles also sports a flashier appearance, with a mirror-like exterior. This will reflect the surrounding environment as the spacecraft ascends to a peak altitude above 80 km and also help with thermal protection.

A few hours after Virgin Galactic’s release, the final two crew members of the “Inspiration4” mission were announced. This is the first “all-civilian” mission to space that is being funded by Jared Isaacman, founder and chief executive of Shift4 Payments. Isaacman is using the three-day orbital mission aboard SpaceX’s Crew Dragon spacecraft to “inspire” people and raise funds for St. Jude Children’s Research Hospital. He previously announced that physician assistant Hayley Areceneaux will accompany him on the mission.

On Tuesday, the mission’s other crew members were named: Dr. Sian Proctor, a scientist and science communicator, and Chris Sembroski, who won a seat by donating funds to the hospital in a contest.

The four-person mission will launch as early as September 15 on Crew Dragon Resilience, which is currently attached to the International Space Station and is scheduled to return in late April. This means SpaceX will refurbish the vehicle in less than five months. “We’ve learned a lot about refurbishing Dragons,” said Benji Reed, director of crew mission management at SpaceX, during a teleconference with reporters.

The mission will fly to an orbital altitude of about 540 km, and Isaacman revealed that SpaceX has developed a special “cupola” that will provide a view from the nose of the Crew Dragon spacecraft. This is normally where the docking mechanism goes in Crew Dragon, but Resilience will not be docking anywhere on this flight.

Asked about the significance of this mission for space tourism, Isaacman said, “This is the first time a global superpower hasn’t sent people into orbital space. Someday, maybe in 50 or 100 years, we’ll have a lunar base and a Martian settlement. But you have to start somewhere.”

Both of these announcements are significant, but for different reasons. For Virgin Galactic, there remain very serious questions about whether it will ever reach an operational cadence of dozens of flights per year, let alone hundreds (VSS Unity has gone to space just twice, most recently in February 2019). The new announcement suggests that the company is at least progressing toward such a cadence that would allow many humans on Earth to experience the “overview effect” from seeing the whole planet from space.

And with the Inspiration4 mission, SpaceX is taking the first real step toward putting “regular” humans into orbit. Having excellent communicators on board like Proctor should help spread awareness. The Crew Dragon mission is “a small but important step toward space tourism,” said Alan Ladwig, author of See You in Orbit. “It’s significant that it’s an all-civilian crew. Of course, space tourism for the masses remains economically elusive.”

Virgin Galactic’s costs have gone up rather than down over time. The company initially began selling suborbital rides for $200,000 before raising the price to $250,000. The company plans to begin selling tickets again later this year but so far has not declared a specific price, only saying it will cost more than $250,000. It’s likely that Isaacman paid more than $200 million to SpaceX for four Crew Dragon seats, but the price has not been revealed.

Ladwig says these prices represent the “pioneering” phase of space tourism, as originally defined by economist Patrick Collins. “We’re some years away from the fourth ‘mass market’ phase when the majority of dreamers will see Earth from above,” Ladwig said. During the mass market phase, he estimates that a suborbital ticket will cost $50,000 or less, and an orbital flight $5 million or less.

Significant questions remain about both approaches, Ladwig added. It’s nice that VSS Imagine is lighter than its predecessor, but will it really get Virgin Galactic flying sooner or more often? And will it bring prices down? Likewise, he said, the Crew Dragon vehicle is not going to usher in a new era of spaceflight for the masses.

However, having a crew filled with compelling personalities and diverse, everyman backgrounds will allow more people to see themselves as potential astronauts. That’s not a bad start, he said.