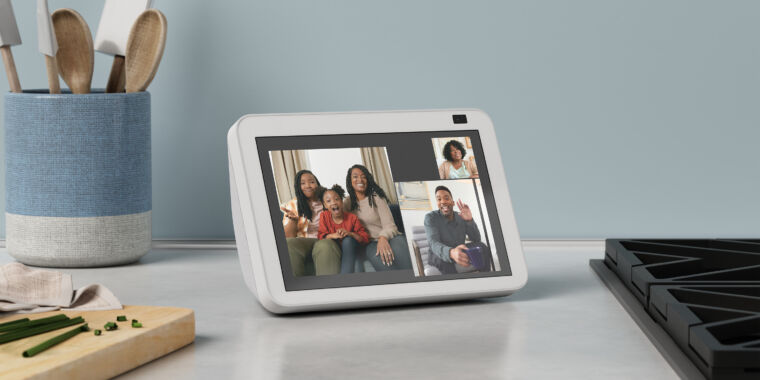 This Echo Show 8 is handling a group video call.

Amazon launched hardware upgrades for its Echo Show 5 and Echo Show 8 products on Wednesday; the new versions have higher-resolution cameras and upgraded CPUs. There’s also a new Echo Show 5 Kids, but the Echo Show 10 did not get a hardware refresh.

If you aren’t familiar with the product line, the Echo Show is essentially an Amazon Echo smart speaker with a screen on it. The devices can be used as digital clocks, videoconferencing solutions, screens for Amazon Ring doorbells, and more—each Show device is basically an Alexa-controlled Fire HD tablet, with all the capabilities that implies.

Amazon points out the privacy controls on these devices, taking what certainly looks like a swipe at Google’s competing Nest and Home devices:

Designed to protect your family’s privacy—Amazon is not in the business of selling your personal information to others. Built with multiple layers of privacy controls including a mic/camera off button and a built-in camera shutter.

All three of the new Echo Show devices are available for preorder now, with delivery beginning on June 9.

Amazon also promises that Echo Show 8 users will soon be able to tap on the screen during calls to produce Snapchat-style reactions—floating hearts, laughs, confetti, and so forth.

The Echo Show 8 can sit on a flat surface directly, or the device can be purchased with a $25 adjustable stand—which is best purchased separately, since the bundle isn’t offering the same $26 discount Amazon is currently applying to the normally $130 Echo Show 8.

The Echo Show 8 is available in a “charcoal” or “glacier white” chassis.

The display on the Echo Show 5 is also a noticeable downgrade—960×480 versus the Echo Show 8’s 1280×800. Amazon appears to be pitching the cheaper, smaller device as a replacement for a bedside alarm clock, with most of the product images showing the device in that role. The company also advertises a “Sunrise Routine,” which—paired with the appropriate smart home devices—turns lights on gradually, plays the news, and tells you about the weather.

The Echo Show 5 is available for $85 (currently on sale for $68) in “charcoal,” “glacier white,” and a new “deep sea blue” color. Similar to the Echo Show 8, it has an optional adjustable stand—available in the same three colors—for $19.

Amazon Kids+—formerly known as FreeTime Unlimited—is a subscription service that offers a staggering selection of downloadable games, shows, and music, as well as parental control features targeted at three basic age groups. The content tends to be more attractive to younger children; it’s typically rather shallow but features well-known and beloved branded characters.

After the included one-year Kids+ subscription expires, renewal is $3/mo for Amazon Prime members and $5/mo for everyone else. Family plans are also available on monthly or annual (prepaid) terms.

Echo Show 5 Kids is available in one color scheme—”chameleon”—for $95, or $10 more than the regular Echo Show 5.