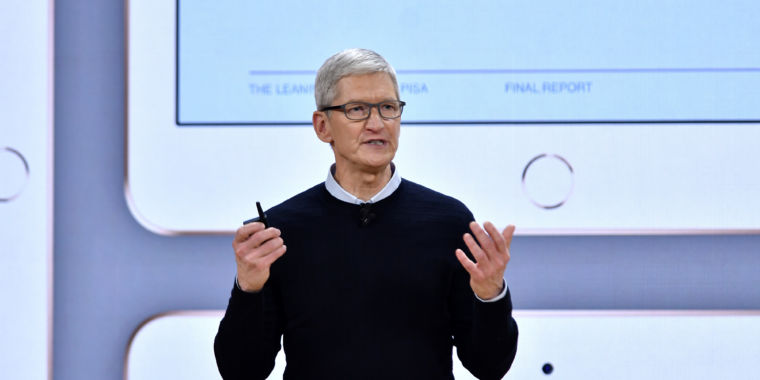 Tim Cook will on Friday be confronted with allegations that Apple is operating an illegal monopoly, in a high-stakes case brought by Epic Games, the maker of Fortnite, where the verdict could have far-reaching consequences for 1 billion iPhone users and thousands of developers.

Cook will be among the final witnesses in the month-long trial, scheduled to end on Monday, in which Epic argues that Apple abuses its allegedly dominant position by forcing developers to distribute applications through the App Store, where it takes a commission of 15–30 percent.

Apple expelled Fortnite from its App Store last year when Epic tried to get around the fees by giving the game’s players a zero-commission way to make in-app purchases.

At stake is “billions of dollars” of high-margin revenue for Apple and legal precedent for what constitutes a monopoly in the digital era, argues Loup Ventures’ Gene Munster.

Apple’s software, hardware, and services ecosystem is coming under increased scrutiny by regulators in Washington and Brussels, where Epic has also been remonstrating against the iPhone maker. But Epic has faced an apparently uphill battle in court after Judge Yvonne Gonzalez Rogers said late last year that the company was arguing on the frontier of antitrust theory.

Epic has drawn on economists, fellow app developers and the words of Apple’s own executives to make its case that Apple deliberately lured developers in with one set of expectations—an App Store that didn’t seek to make profits, as Steve Jobs said in 2008—before introducing a series of mechanisms to lock consumers into its ecosystem and make it difficult to switch.

Apple said Jobs’ statement was not a pledge so much as a prediction—a wrong one, to be sure, but wrong because the App Store turned out to be, in the words of Cook, an “economic miracle.”

Jobs had said it might become “a billion-dollar marketplace at some point in time,” whereas, according to Sensor Tower, spending in the App Store reached $72 billion in 2020.

Outside experts called by Epic suggest the App Store boasts operating margins of 78 percent—a rate reflecting its dominance and abuse of power, according to the games maker. But Apple called those figures nonsense, claiming it does not even calculate App Store margins.

The serious case has taken bizarre turns, including an argument about whether the animated bananas in Fortnite are “naked” without their tuxedos, as Apple’s lawyer said.

The seemingly trivial comment in fact went to a core argument that Apple has used in its defense: that an exclusive and curated App Store is good for iPhone users because it protects them from lewd content that might appear if the company was forced to give up control and allow alternative app stores on its hardware.

Whatever the outcome, the trial has offered a rare glimpse into the inner workings of the world’s largest company and surfaced materials that Apple’s critics around the globe may yet use to advance claims it has acted anti-competitively.

Emails uncovered in the discovery process, for instance, showed Apple executives opposed allowing the company’s iMessage app to also be used on rival Android phones, since that would “remove [an] obstacle to iPhone families giving their kids Android phones.”

In another exchange, an Apple engineer said that “it would be awesome” if Apple could sell ads in the App Store, like Google does for the Play Store, but he acknowledged this would be “at odds” with Cook “telling the world we make great products without monetizing users.” Nevertheless, Apple launched the service in 2017 and expanded it last month.

Apple has complained about “trial by anecdotes.” Its lawyers maintain Epic has failed to show that Apple’s App Store rules are unusual, that its 30 percent fee is excessive, or that its interest in preserving user safety is a pretext.

What exactly Epic plans to ask Cook is not clear. No emails of substance written by Cook have been made public, and Epic’s multi-hour deposition of him earlier this year remains under seal.

Speaking to Congress last year, Cook defended App Store curation as one of the iPhone’s “chief features.” He said he welcomed “reasonable and appropriate” scrutiny but would “make no concession on the facts.”