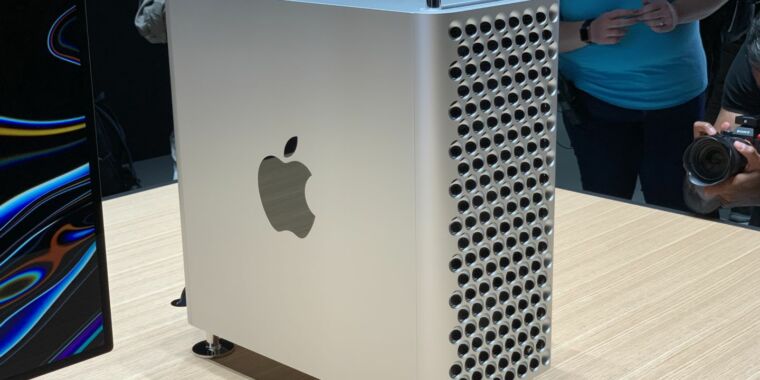 Apple plans to introduce significantly updated versions of the MacBook Pro, MacBook Air, Mac mini, iMac, and Mac Pro, according to a new report in Bloomberg citing people familiar with Apple’s plans. The report shares much more detail about these machines than we’ve previously been privy to.

Each of the new computers will include a substantially faster successor to the M1 chip. Bloomberg’s sources say the MacBook Pro, which is expected to come in 14-inch and 16-inch variants, could launch as soon as this summer. That suggests Apple may announce the computers at its annual developer conference in early June.

A totally redesigned MacBook Air will follow, as will an updated version of the low-end Mac mini, which still uses Intel processors. A new 30-inch iMac will replace the current 27-inch Intel model.

Finally, an Apple Silicon version of the Mac Pro desktop is planned for 2022.

The new machines appear tailor-made to address criticisms of recent Intel Macs and the initial volley of Apple Silicon machines. To wit, the maximum amount of RAM supported by these new chips will be 64GB (up from 16GB in the M1), more than two Thunderbolt ports will be supported, and the new laptops will feature HDMI and SD card slots. That last addition addresses a complaint many users have had about the MacBook Pro for some time now.

The MacBook Pro is expected to ship with two chip variants, codenamed Jade C-Chop and Jade C-Die. These chips’ CPUs will include eight high-performance cores and two efficiency cores. The GPU in one variant will have 16 cores, while the GPU in the other will have 32.

That’s a step up over the M1’s four high-performance and four efficiency CPU cores and either seven or eight GPU cores (depending on configuration).

The Mac mini will use one of these chips as well, and it will double the number of ports seen in the M1 Mac mini. Meanwhile, the 30-inch iMac’s immediate future seems unclear, as Bloomberg’s sources say that work on the 30-inch model was temporarily paused in order to get the lower-end 24-inch iMac out the door.

The MacBook Air coming later this year will have a “direct successor” to the M1, codenamed Staten. The new chip will have the same number of CPU cores as the M1 but will still offer faster performance. It will also bump the GPU core count to 10. This chip is also planned to be included in a refresh of the low-end 13-inch MacBook Pro.

Finally, the Mac Pro slated for 2022 will come in 20- and 40-core CPU configurations, with 16 or 32 high-performance cores and four or eight high-efficiency cores. The GPU will be offered with either 64 or 128 cores. It is expected to “look like a smaller version of the current design.”

Apple plans to replace its last Intel Mac with an Apple Silicon version as early as 2022. The MacBook Pros may come as soon as the summer, and the Mac Pro will almost certainly arrive next year. The timing of the MacBook Air, 13-inch MacBook Pro, Mac mini, and 30-inch iMac updates is currently a little less clear.