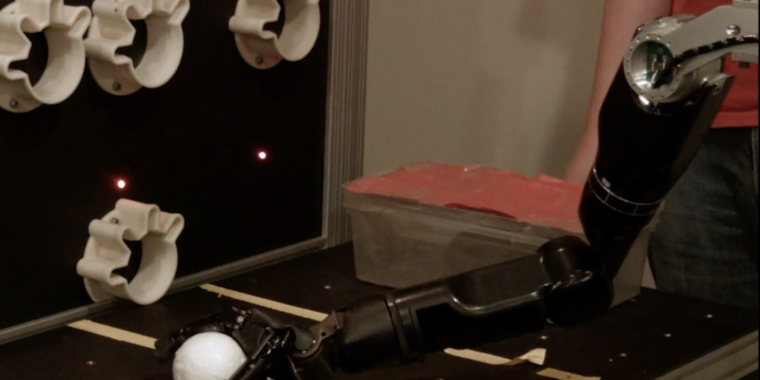 One of the most stunning examples of the promise of brain implants is shown in a video in which a paralyzed person controls a robotic arm with nothing but her thoughts. The technology alone is impressive, but the joy on the participant’s face as she grabs herself a drink for the first time in over a decade really drives home just how important this technology can be.

While we’re still decades away from widespread implant use, there are continued signs of progress in making implants more functional. Last week, we saw a neural implant that could turn imagined writing into real text. This week, the research community has followed up with an implant-controlled robotic arm that sends touch feedback to the user via a second implant.

When we go to pick up an object, we locate the object primarily through vision. From there, other senses take over. Humans have a sense called proprioception, which helps us know where our body parts are, even when they’re not visible. Our sense of touch tells us when we’ve made contact with the object, and pressure sensation gives us an indication of how firmly we’ve grasped the object. The visual system quickly becomes secondary to the process.

But for early robotic arms, the visual system was all we had to go on. Users had to track the arm visually as they maneuvered it, and they had to estimate when they had a firm grip on an object simply by looking at it. While that represents an improvement over paralysis, it’s not especially intuitive. It also requires extensive training, and it demands the full attention of the arm’s user. Adding in some of the other senses would provide obvious benefits.

While proprioception is a rather challenging sense to reconstruct, the senses of touch and pressure are much more straightforward. Early attempts at giving touch and pressure feedback involved providing sensation to a patch of skin. The system required extensive training to translate whatever a user was feeling into information about the pressure being applied by robotic fingers.

But we’ve since developed a decent understanding of the brain areas that process the information sent to them by sensory nerve cells in the hand. For the new research, a team implanted two electrode arrays into the part of the brain that specifically handles information coming from the skin. Activating these electrodes—32 of them in total—produced the sensation of something interacting with the palm and fingers.

The study’s participant, who had been paralyzed from the neck down, had been controlling a robotic arm for roughly two years by using brain implants in the motor-control region of his brain. He could successfully use the arm, even without any sensation. For the new experiments, however, the research team alternated tests in which the arm had additional tactile feedback and tests in which that system was shut off. Most of the tests involved grasping objects of various shapes, moving them somewhere, and then dropping them.

Many individual tests all showed a similar pattern: having a sense of touch drastically improved performance. The median completion time of a pick-up/move/drop sequence decreased in all cases, with the difference being statistically significant in about half of them. Put differently, in the time it took the participant to complete nine tasks with the touch system switched off, he could complete over a dozen with the system active.

While every aspect of performing the task was improved, the most significant boost came in the process of grasping the object. The time between the participant contacting the object with the arm and lifting the object off the table dropped by two-thirds when touch feedback was switched on. When the system was off, the participant spent more time arranging the hand to ensure a stable grip before moving on.

As with last week’s brain-implant-based typing system, this study had only a single participant, so we’ll need confirmation that the system works more generally before getting too excited. But there’s no reason to be surprised by the results—while we may not always be consciously aware of them, touch and pressure play a major role in everything we do with our hands. By targeting the right area of the brain, the implant takes advantage of the systems the brain already has for managing this kind of sensory input.

More generally, the work highlights the promise of these implants—and the work we have left to do. Even this sort of preliminary system would probably make for an improvement in many paralyzed people’s lives. But the implant technology will grow over time, and we’ll continue to improve our understanding of the operation of the relevant brain regions. At some point, the technology could move on to larger trials and possible widespread medical use.