Efficacy of Chinese vaccines is “not high”—officials back 3rd dose 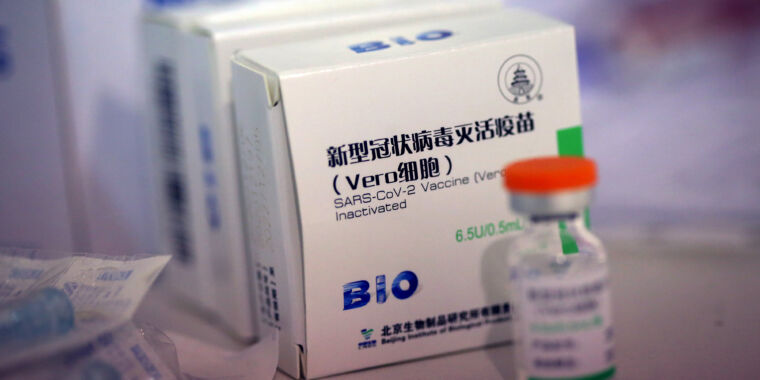 Officials in Beijing are reportedly planning to roll out third doses of China’s COVID-19 vaccines. These shots have long been dogged by doubts of their efficacy.

According to a report by The Washington Post, health experts in China say that protection from the vaccines may not last after six months and that people who are at high risk of COVID-19 should get a third dose. Now, state-run media outlets suggest Beijing is on board with the suggestion and is preparing to offer the third doses.

Last week, both the United Arab Emirates and Bahrain said they would offer third doses of China’s Sinopharm vaccine to try to boost protection. UAE is offering the extra shots to anyone who was vaccinated six or more months ago. Bahrain is offering third doses to high-risk groups.

Sinopharm’s COVID-19 vaccine as well as China’s Sinovac vaccine are made with whole, inactivated coronavirus SARS-CoV-2. Inactivated virus vaccines have the advantage of being relatively easy to make. But, they come with the potential drawback of providing weaker protection than more targeted vaccine approaches, such as the mRNA-based vaccines (Pfizer-BioNTech and Moderna), which take aim at just one particular key element of the virus: the spike protein.

Sinopharm has reported a 79 percent efficacy rate for its inactivated vaccine, but it has not released the full data supporting that estimate. Sinovac’s vaccine may have an efficacy rate as low as 50 percent, according to trial data out of Brazil.

Last month, the head of the Chinese Center for Disease Control and Prevention, George Gao, seemed to acknowledge the problem, saying that the efficacy of China’s vaccines is “not high.”

Gao, speaking at a conference in Chengdu, said that Beijing was “formally considering” possibilities to “solve the problem that the efficacy of the existing vaccines is not high.” Those possibilities included altering individual doses or increasing the number of doses people receive.

The comments were quickly censored on Chinese social media, the Post reported at the time. The Post also noted that state-run media called reports of Gao’s statements “hyped up.”

Though experts have raised questions about the efficacy of China’s vaccines since their data-less release, the need for boosters isn’t necessarily avoidable. Speaking in a series of public interviews last week, top US infectious disease expert Anthony Fauci noted that immunity to common coronaviruses isn’t long-term. He predicted that people given the highly efficacious mRNA vaccines may still need a booster “within a year or so.” Pfizer CEO Albert Bourla largely agreed with Fauci, saying boosters may be needed somewhere between eight to 12 months, though the data is still unclear on the exact timing.