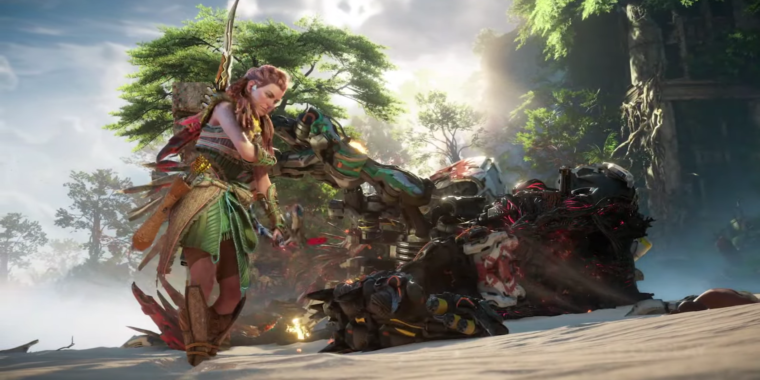 Another successful robo-safari for Aloy in Horizon Forbidden West.

Aloy, the braided-hair hero of Sony’s 2017 smash Horizon Zero Dawn, is set to return to consoles later this year in the series’ first sequel, and on Thursday, we finally learned how that sequel video game will look.

On the cusp of 2021’s kinda-sorta virtualized E3, creator Guerrilla Games premiered an uninterrupted, 14-minute gameplay sequence from this year’s upcoming (and undated) Horizon Forbidden West. The sequence centers on an early-game mission to save a captured ally, and it has all the hallmarks of a flashy press conference reveal: familiar characters, slow-motion pans over insane-looking robot monsters, and a conveniently linear path full of perfectly placed mid-battle dialogue.

Still, what we saw actually looks like a real-deal, Horizon-branded video game—and arguably one that will neatly scale to Sony’s past-gen PlayStation 4 console, since it leans less on flashy new tech like ray tracing or uninterrupted landscapes. This gameplay reveal was advertised as running on real PlayStation 5 hardware, however, so exactly how the game will downscale to base PS4 consoles remains to be seen. (Lower frame rates? Fewer water effects? Aloy’s signature braids chopped off and replaced with a buzz cut?)

In terms of the game’s mechanics, Aloy continues to move on foot around an apparently open world with an arsenal that melds the handmade with the bionic. Once again, she can stealth-sneak on a robot and override its internal logic to render it docile. In terms of weaponry, she now wields a few more supercharged options: a “power surge” that she can slap onto her staff for new melee combat abilities; a “shield glider” that lets her float, semi-protected, when dropping from great heights; a “pull-cast” that works like Spider-Man’s wall-sticking grappling hook; and a special mask that lets her breathe underwater without a time limit.

Yes, Aloy can swim much more in Horizon Forbidden West. That fits the first announced setting for the game: the far-in-the-future decaying remains of San Francisco, now overgrown with sandy beaches, jungle florae, and ever-growing flood zones. Traces of the past remain in the building signs and wrecked cars that somehow survived so long, but otherwise, the City of Fog is mostly overrun with the same robotic dinosaurs and beasts that roamed the world and hunted Aloy in clever packs in the 2017 original. We get a glimpse of a few new robo-saur designs, including a raptor-like monster with a twin-chainsaw mouth and a massive wooly moto-mammoth—and we see Aloy’s surprise that local raiders have learned to tame and use these beasts the same way she has.

This reveal teases future zones for Aloy, including a map interface that appears to target Baja California, but it otherwise doesn’t introduce wildly new concepts, be those new ways to tame monsters, entirely new weapon systems, or a possible party of additional warriors at your side. This reveal seemed poised to remind us that Forbidden West is still a Horizon game in terms of herding, riding, and defeating sensationally designed robot monsters—though I’m curious to see how many additional features and touches are revealed in the eventual hype-trickle between now and, well, whenever the heck the game launches. Should Forbidden West meet its announced launch window of “2021,” then we can begin counting down when to expect its eventual PC port.