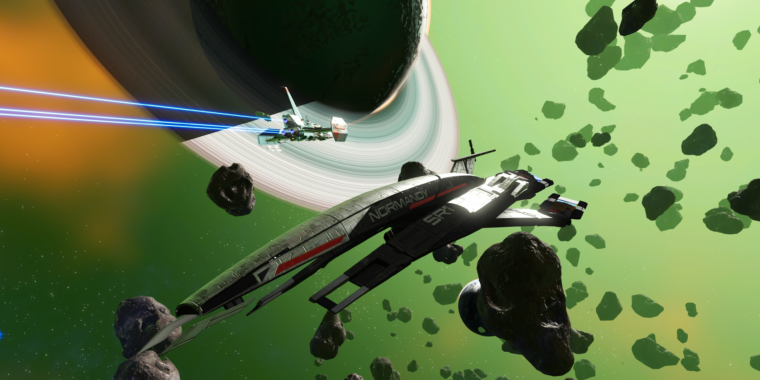 Joker appears to have jumped halfway across the galaxy and hit a target the size of a pinhead. That target happens to be an entirely different video game: No Man’s Sky!

We at Ars Technica love crossover events in every pop-culture format, but they’re arguably the best in video games, since they let fans settle playground arguments regarding which superhero or mascot could win in a fight. Still, that affection doesn’t mean Ars must keep up with every single “dream” announcement about third-party characters in games like Super Smash Bros. Ultimate, Soulcalibur VI, Tekken 7, Mortal Kombat 11, Samurai Shodown, Power Rangers: Battle for the Grid, and so on. We love them! Bring them on! But most IP crossovers don’t warrant a headline. (Sorry, John “two games in one year” Rambo.)

In today’s case, I’ve made an exception.

The latest update to No Man’s Sky, which goes live sometime today, unlocks a very familiar spaceship inside the nearly infinite universe of NMS: the SSV Normandy SR-1, lifted from the first Mass Effect game. Yes, that’s the SR-1, not the eventual SR-2. (Tali would approve.) While Normandy doesn’t come with a handy Mako for players to drop onto Hello Games’ 18 quintillion planets, it does include an incredible S rating (seen in the above gallery). As far as No Man’s Sky frigates go, the SR-1 is SR-number-one.

Hello Games has confirmed that the crossover event, timed alongside the launch of the Mass Effect Legendary Edition trilogy package on PC and consoles last week, is a limited-time affair that requires a few gameplay steps. It caps off a four-day mystery within the NMS universe, kicked off by a new dump of “Expeditions” mission content. Within this update, players found mention of a new item called the Historiographical Dosimeter, along with teases about “something stirring from across the universe.”

Once players complete enough “milestones” in Expeditions mode, they’ll receive the Dosimeter object in question, which, ahead of today’s update, leads players to a few steps they can take to acquire some valuable “Quicksilver” currency. While Hello Games didn’t immediately respond to questions about how to find the SR-1, the company’s rep did make clear that the Dosimeter and its mission chain is involved. Complete that Expeditions content before May 31 and you’ll permanently unlock the SR-1 as part of your save file’s frigate fleet. I assume NMS goes no further with this promotion’s quest content, though if Sean Murray and co. want to add some spicy Vy’keen-and-Kromax love triangles to the game for good measure, count me in.

Incredibly, nobody put two and two together about this crossover ahead of today’s reveal, although NMS fans did manage to solve a language codex and translate a new, cryptic message: “Look to the Monolith, the weapon is coming.” Either way, it’s even more good news for the game’s continued march from a rocky 2016 launch to an utter, update-fueled redemption story.

This week’s update follows a much different announcement for No Man’s Sky slated to launch by month’s end. The game’s virtual reality mode on PC, which has the exact same content as the non-VR game, will soon become one of the first VR games in the world to support Nvidia’s proprietary Deep Learning Super-Sampling (DLSS) system.

This perk will require one of Nvidia’s “RTX”-branded graphics cards. That’s because its upscaling methodology leans on dedicated processing cores, dubbed “Tensor cores,” to run computations based on Nvidia’s machine-learning model. Through this model, lower-resolution gaming images can be upscaled and cleaned up in ways that can even surpass the pixel quality of “raw” game graphics, as processed through temporal anti-aliasing.

I’ve tested DLSS on many standard 2D games, and the results generally impress. But I’ve yet to see VR games get the same treatment. Will DLSS withstand the increased scrutiny of VR, which requires higher frame rates and reduced “ghosting” artifacts to keep users comfortable? And can DLSS scale to two simultaneous images, since VR games render one image per eye? Those answers will have to wait until Hello Games unlocks the updated VR mode for our testing—and I’ll return to do just that as soon as I’m able, since DLSS may make the demanding VR mode in NMS far more fluid on weaker computers and laptops. Stay tuned.