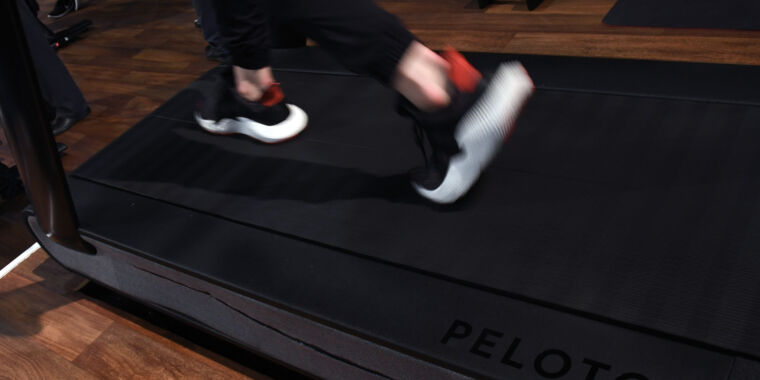 Interactive fitness company Peloton has agreed to recall two treadmills nearly two months after the company reported that a 6-year-old child died after being pulled under one of the devices.

Peloton has received at least 72 reports of adults, children, pets and/or objects getting dragged under their Tread+ treadmill. In those incidents, 29 children suffered injuries, which included second- and third-degree abrasions, broken bones, and lacerations, the US Consumer Product Safety Commission noted.

In February, a father reported to the CPSC that his 3-year-old son was pulled under a Tread+ and trapped. When the father discovered his son and was able to free him, the toddler was pulseless and not breathing, according to the report. Fortunately, the boy was resuscitated, but he “now has significant brain injury.” The boy had tread marks on his back matching the slats of the Tread+, as well as a neck injury, and petechiae (small blood spots) on his face, presumably from blood flow being cut off.

When Peloton learned of the “unthinkable” death of the 6-year-old in March, Peloton CEO John Foley sent a note to customers noting the “tragic accident” and highlighting safety warnings for its treadmills. The March 18 note cautioned customers to “keep children and pets away from Peloton exercise equipment at all times.”

It appeared the company thought that the warning was sufficient, but the CPSC disagreed. On April 17, the commission urged people to stop using the treadmills, noting an influx of accident reports. The commission also released a chilling video of a child getting pulled under a Tread+.

In a follow-up note April 18, Foley wrote to customers:

You may also have read news reports suggesting that CPSC believes that we should stop selling or recall the Tread+. I want to assure you that we have no intention of doing so. The Tread+ is safe when our warnings and safety instructions are followed, and we know that, every day, thousands of Members enjoy working out safely on their Tread+.

Foley now regrets that response—after a lot of convincing from the CPSC. In the recall notice, Acting Chairman of the CPSC Robert Adler said that the recall agreement between CPSC and Peloton “is the result of weeks of intense negotiation and effort.” Still, Adler celebrated the recall, saying, “Today we have taken steps to prevent further harm from these two products.”

The recall notice also includes a statement from Foley, who now called the recall “the right thing to do.”

“I want to be clear,” he said. “Peloton made a mistake in our initial response to the Consumer Product Safety Commission’s request that we recall the Tread+. We should have engaged more productively with them from the outset. For that, I apologize. Today’s announcement reflects our recognition that, by working closely with the CPSC, we can increase safety awareness for our Members.”

The CPSC says all consumers with a Peloton Tread or Tread+ should stop using the treadmills and contact Peloton for a full refund.