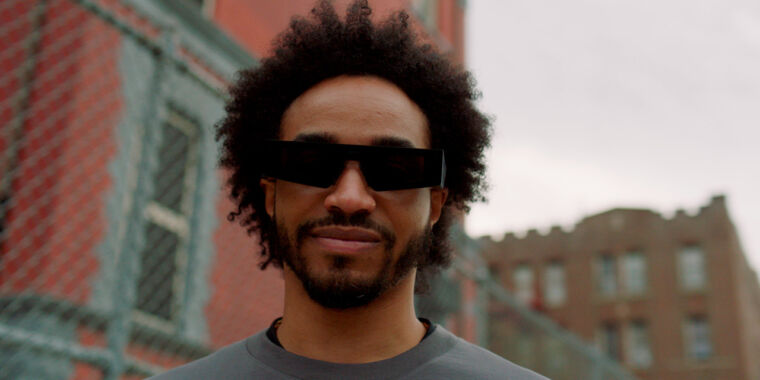 Snap Inc., the company best known for the popular Snapchat social camera app, has announced its first pair of augmented reality glasses that most people would agree actually qualify as real AR glasses. Like previous glasses the company has produced, they are called Spectacles.

Spectacles will not be available to buy as a mass-market consumer product—at least not in the immediately foreseeable future. Instead, Snap is seeding units to developers and content creators so the glasses can be used to create new experiences and filters. These creators will build these with Lens Studio, a Snapchat-specific tool that is already widely in use.

Spectacles enable new ways to view and create Snapchat Lenses, which are generally simple augmented reality filters that Snapchat users apply to the videos they send each other.

At 134 grams, Spectacles are among the most compact AR glasses of this type. The two waveguide optical see-through displays are capable of 2,000 nits of brightness, so the image can be clear outdoors in the sunlight and in other bright environments. A 15 millisecond motion-to-photon latency isn’t perfect, but it’s close enough to make the experiences appear generally accurate and impactful. Users control the glasses using a touchpad on the frame or with voice commands.

The cameras are used to capture footage of the real world from the user’s point of view; Lenses are then applied, and the finished video that combines the video capture with the virtual effects can either be saved or published to other people.

This is the fourth generation of Snap’s Spectacles. The first two generations were simply video-capture devices, each housing a single camera. Users would then apply effects to the videos on their phones. The third generation added a second camera to capture depth information, enabling more sophisticated and more accurate effects and filters—but those, too, lacked embedded displays, requiring users to visualize and apply Lenses on their phones after the video had been captured. Users couldn’t see the effects through the glasses themselves until this iteration.

Not ready for mass consumption

Unfortunately, as is the case with so many early AR glasses, there are still many limitations. The field of view is quite small—you can see just how limited when viewing the examples in the promotional video below. The concepts are neat, but they’re a long way off from what AR enthusiasts dream we’ll eventually see.

Basic principles of optics, such as the conservation of étendue and others, pose major challenges to fully immersive field-of-view on practically sized lenses that are so close to the viewer’s eye. Significant improvements in this area are difficult to achieve without compromising other important design parameters for making AR glasses both practical and immersive.

Another challenge companies with AR ambitions like Snap, Facebook, Apple, Microsoft, or Google must overcome is battery life; Snap’s Spectacles run out of juice after just 30 minutes of continuous use.

Most of the technologies at play in the newest AR glasses have been around for years and with the exact same limitations. The most significant recent breakthroughs in AR have been related to software and cost, even while R&D teams continue to battle some of the same longstanding hardware hurdles—sometimes managing modest progress, sometimes managing next to none.

Some of the problems can be at least partly addressed by doing most of the demanding processing on a synced device, like a smartphone, rather than handling processing on the glasses themselves. For example, Apple’s recent focus on faster mobile chips for the iPhone may, among other things, be groundwork for running AR applications on an iPhone that is synced with a headset that does comparatively little of its own processing.

For some AR devices, on-device processing-power limitations are partly to blame for the small field-of-view, so that approach could alleviate the problem. But as noted, that’s not the only (or even the biggest) challenge that needs to be overcome when it comes to achieving a more immersive field of view or overcoming any of the other limitations of current glasses.

The potential of AR as a computing platform is clear, but it won’t reach the mass market until some big breakthroughs happen. Investment is pouring in like never before, so those breakthroughs could very well come. But predicting just how quickly (or slowly) that process will move is difficult.

The big players in AR are (slowly) revving up

Despite these hurdles, big tech companies like Facebook and Apple are all-in on AR. Facebook recently announced that it is developing a wristband that will be used as an input device for its smart glasses, and the company is expected to launch smart glasses that lack AR capabilities sometime soon.

Apple executives have repeatedly stated that they believe augmented reality is an important part of Apple’s future, and it is believed that Dan Riccio, the company’s former head of hardware engineering, recently stepped away from that role to focus entirely on mixed reality product development.

These companies and others have one thing in common: either they believe with certitude (as does Apple CEO Tim Cook) that augmented reality glasses will eventually follow the smartphone as the world’s leading mobile computing platform, or they believe that is at least a strong-enough possibility that they would be foolish not to hedge by investing heavily in the technology so as not to risk falling behind.

However, the aforementioned technical challenges and more mean we are unlikely to see a watershed moment for AR glasses any time this year. Snap’s Spectacles aren’t going to change the landscape. Rumor has it that Apple has been targeting a 2022 date for its first effort at releasing a mixed-reality headset, but leaks suggest that the first mixed-reality product from the company will probably be aimed more at the developers who will create future apps and experiences than at end users.

While Facebook has repeatedly indicated that AR glasses are a huge focus for the company, a mass-market release is still a few years away. And even Snap CEO Evan Spiegel told The Verge that he believes AR glasses won’t go mainstream for another decade or so.

Snap’s new Spectacles appear to primarily be an early trial run to attract the development and content-creation talent that will play a part in refining the tools and experiences that will become the cornerstone of Snap’s AR ecosystem in that not-so-immediate future. Like previous generations of Spectacles, they also play a part in a marketing strategy to associate Snap’s products with social media influencers; the initial wave of Spectacles didn’t do much, but Snap enjoyed a great deal of publicity as content creators wore them prominently and publicly.