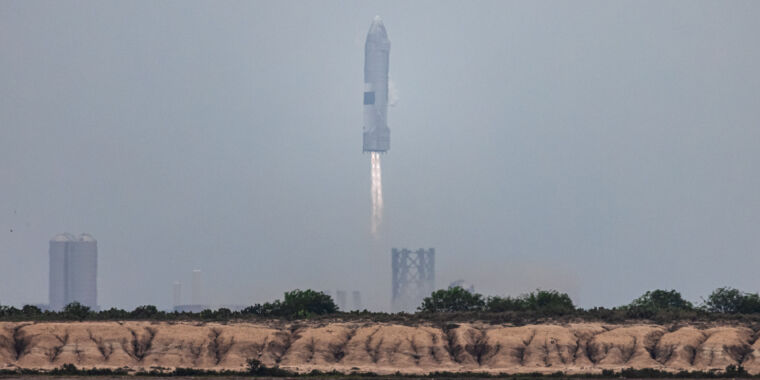 By now, many readers are familiar with SpaceX’s Starship tests. The rocket makes its way skyward and performs maneuvers that seem like impossibilities to a generation raised on rockets that simply shot things to orbit. These maneuvers are followed by an ungainly looking float toward the Earth below, which ends in a sudden lurch as the rocket struggles to a vertical orientation and tries to lose speed.

In general, this has been followed by a dramatic explosion as one aspect or another of the incredibly complex series of events required doesn’t work quite right. The biggest exception was one case where that explosion waited for several minutes after the rocket’s landing.

Today’s launch followed the script right up to the landing, at which point everything changed. The landing went off without a hitch this time, and the hardware stayed intact—albeit on fire—well after the landing.

Conditions were cloudy above the launch site, which posed a bit of a problem for tracking the flight. Starship quickly disappeared above the clouds, at which point the video stream from the craft failed. As live timers ticked off progress and data indicated engines shut down to bring the craft to a hover, there was no visual confirmation of any of it. Video returned sporadically after the belly flop started, providing some dramatic images of thunder clouds off in the distance.

Given the lack of context, the maneuver that brought Starship to a vertical took place very suddenly. But the first views from the ground made clear that the maneuver was happening at a higher altitude than in previous attempts that ended in explosions. Given that extra space to work with, the hardware easily reached a vertical orientation well above the ground and then managed a gentle descent for the remaining distance.

After landing, a small fire burned on one side of the base of the rocket, but it was out within 20 minutes. Whether it stopped due to lack of fuel or was put out by hardware on the landing pad is unclear.

The landing is a tremendous success and comes at an important time for the company, as NASA has chosen Starship as its intended lander for future Moon missions. While the company had the advantage of having working prototypes, their tendency to explode may have provided an argument against the contentious decision. The successful landing should strengthen SpaceX’s case.