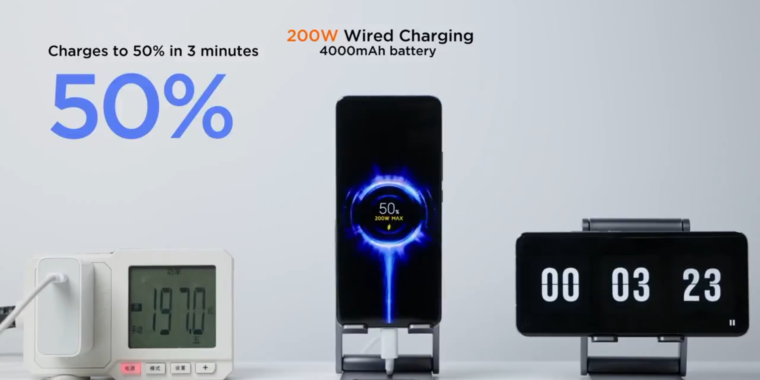 Xiaomi has just showed off a new high mark for smartphone charging: a 200 W charging system. The company demoed “Xiaomi HyperCharge” in a new Twitter video this weekend, saying that the new tech can rocket a phone from empty to full in eight minutes. That’s about as long as a trip to the gas station.

These quick-charging systems don’t provide a continuous charge rate, but Xiaomi was nice enough to hook its new charger up to an electricity usage monitor so we can see what’s happening. The phone charges to 10 percent in just 44 seconds, then quickly ramps up to 200 W. The phone achieves a 50 percent charge in a ridiculous three minutes. Next, the phone slowly ramps the power down, dropping to 150 W and hitting 75 percent charge in five-and-a-half minutes. Finally, the system ramps down to 40 W on its way to a full charge at eight minutes.

Behavior like this—gently topping off the battery for the last part of the charge cycle—is meant to protect battery longevity, and it is part of the reason there’s no evidence that fast charging degrades your battery more quickly than regular charging.

Xiaomi isn’t the only company pushing for faster charging speeds. Qualcomm announced 100 W charging tech last year (though, for some reason, the uptake on this feature has been very poor), and Oppo is up to 125 W. Xiaomi’s best commercial phones hit 120 W. All of these systems use proprietary chargers right now, but with USB-C recently adding support for 240 W power delivery, maybe we could all agree on a standard? Please?