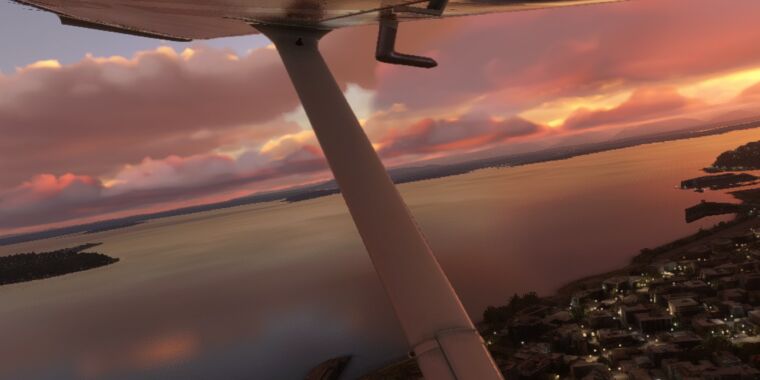 Anyone who has played a flight simulator knows that screen real estate is critical. Your average 16:9 TV or monitor is fine for most video games, but flight simulators are all about the spatial awareness of sitting in a cockpit, peeking at a massive console of virtualized buttons and screens, and having your midair view framed by a plane’s windshields and windows.

A wider monitor is better for that simulation, while a freakin’ virtual reality headset opens up the virtual skies—but at the cost of VR’s high processing demands.

Since July 2020, the teams responsible for Microsoft Flight Simulator have been pledging to deliver a truly playable VR version of the game. That pledge kicked off months later with serious turbulence, and after my earliest tests, I warned interested fans to prepare their stomachs for a bumpy ride.

The only stutters should come from the air up there

This week, my tune has changed. I now recommend that everyone with a performant gaming PC and a VR headset do whatever they can to test MSFS‘s VR mode. This comes in the wake of a giant patch that was released alongside the new Xbox Series X/S version of the game. The patch targets the game’s CPU-based performance and delivers far more stable frame rates, whether on a standard monitor or spread across a pair of VR headset lenses.

This gallery collects real-time captures of my most recent 90 fps flight in VR over my hometown of Seattle, which I picked partly because it’s a demanding city to render and partly because I can fly over my house. Each image is a capture of one VR lens, which is why it’s in a weird ratio.

The biggest difference comes from a direct comparison with my earliest VR testing scenario, as run on a rig with an i7-8700K CPU, Nvidia RTX 3080 GPU, and 32GB of DDR4-3000 RAM. In December 2020, I noted that I was unable to get the game up to a 90 fps refresh at the lowest VR settings while the resolution was scaled down to 60 percent of the native count. Using the same rig this week, I can bump up various graphics settings slightly higher, run the native resolution at 70 percent, and hit a frame rate that hovers much closer to 90 fps.

One huge contributor to the previous poor performance was frame time spikes. The number of in-game stutters and spikes has dramatically dropped thanks to the PC version’s latest updates, so even when you fly over a more populated city and MSFS can’t keep up with the demands of a 90 fps refresh, the frame rate still hovers somewhere close to 80 fps.

That improvement is the secret sauce to enduring lower frame rates in VR. You may very well be fine with a slower refresh within the confines of a slow-moving virtual airplane, especially since MSFS revolves around the intentional, careful piloting of realistic planes, as opposed to whiplash-inducing dogfights. If that means you’d like to run this game on slower hardware or crank up various settings to reach a maximum frame rate of 72 fps or even 60 fps, then more power to you.

Now, with CPU-based stutter dramatically reduced, I can safely say that PC-VR enthusiasts no longer need the most expensive rig imaginable to see what MSFS‘s VR mode might feel like.

As in my tests of the console version, I spun up cherry-picked locales I’m familiar with to conduct my VR tests. Some are filled with massive cityscapes. Others are boring, desolate stretches of flat land. And a few required that I fly through valleys with intense terrain and strong weather systems to match. I found that dense cities were more likely to trigger mild drops in frame rate than massive stretches of nature, while all scenarios were still subject to occasional, bizarre pauses lasting as long as 10 seconds. I’m not sure how much those pauses had to do with the game’s servers being pounded by new console owners, but the hitches were certainly annoying—though I’ll take those kinds of pauses over the constant stutters in the VR and PC versions of old.

Also, be warned: Geometric detail still weirdly morphs as you approach it in VR. That’s because an aggressive level-of-detail slider keeps the demanding game running at a smooth rate. Between that issue and lower-resolution elements like textures and water reflections, your brain won’t necessarily be tricked into believing that you’re in a real-life flight, even if you surround your VR rig with realistic and satisfying PC control systems. Unless you own a supercomputer from the future, you’re in VR for increased visibility and general comfort, not photo-realistic visuals. (Though in certain settings, particularly in the Seattle gallery above, MSFS can still look mighty fine in VR, thanks to how well many of its weather systems run.)

I also tested a few VR flights with AMD’s RX 6800XT in the same rig and was surprised to see that GPU struggling more to reach comparable frame rates. I’m hopeful that fixing this is a matter of small patches for either Xbox Game Studios or AMD, especially since I had expected AMD to win this particular battle (since Xbox Series X/S consoles leverage AMD’s RDNA 2 GPU architecture already).

The same optimizations can be found throughout the game’s non-VR version on PC. This is fantastic news for anyone who might have previously tested MSFS via a temporary Game Pass subscription and then bailed. If that was you, I recommend flying MSFS on PC once again.

Your best path to higher average frame rates in VR comes from lowering the resolution within MSFS‘s VR graphics menus. After that, just make peace with allowing as few shadow-related toggles as possible. Ambient occlusion is a fantastic graphics option to enable far more realistic touches of shadow on objects in your cockpit. At the same time, it drops VR frames way more than it’s worth.

Start by going into SteamVR’s “Developer” settings tab and turn on “Display Frame Timing” or “GPU Performance Graph.” That setting will put a wacky little box in your view at all times. Once that monitor is on, boot a quick VR flight instance in New York City or London, wait a minute for any possible cloud-streamed data to trickle in, pause, fiddle with various graphics settings, and hit “apply.” You’ll see an immediate effect on the frame time graph while paused mid-game, and you’ll want a count of roughly 11.1 for 90 fps, 12.5 for 80 fps, or 13.9 for 72 fps. When you see a count approaching any of those refresh rates, unpause, fly normally, and keep an eye on the graph for performance variance before going back into the menus and adjusting once more.

Your favorite result will most likely require downscaling the resolution severely. That will mean some blurry text on the instrument panels—but also some solid default resolving of distant details via the game’s built-in antialiasing methods. (In other words, if you’re on a newer VR set like Valve Index, HP Reverb G2, or Oculus Quest 2 and look in the distance, it won’t look like a blurry HTC Vive 1.0 scene.)

Just be sure to disable all “reprojection” options in SteamVR for MSFS. This system does a particularly bad job of resolving a blurry, constantly moving propeller in your line of sight.

If you take the VR dive as a result of this article, or if you’ve already rushed to do so since the update’s launch roughly 24 hours ago, I’d love to hear your own test results and recommendations in the comments section below.