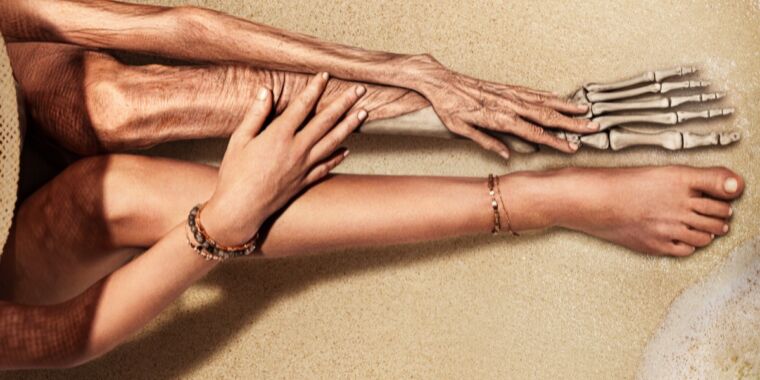 Director M. Night Shyamalan has a well-known fondness for his signature surprise twist endings. When those twists work organically, we get classics like The Sixth Sense and Unbreakable. When they don’t—well, if you’re lucky, you get something like his new film, Old, in which everything that comes before is sufficiently compelling that you can almost shake off a jarring final twist that feels so forced, it’s almost like it belongs in an entirely different movie.

(This being an M. Night Shyamalan film where surprise twists are tantamount, I have taken great pains to avoid spoilers. There is nothing discussed in the review below that has not already been revealed in the film’s trailers.)

Old is based on a French graphic novel called Sandcastle, written by Pierre Oscar Levy (also a documentary filmmaker) and illustrated by Frederik Peeters. It’s about a group of 13 people who find themselves trapped on a mysterious, secluded beach where time moves much more quickly—so quickly that young children reach puberty in a matter of hours, and everyone will reach old age and die within 24 hours. Shyamalan received a copy of the book as a Father’s Day gift and was immediately touched by how it humanely grappled with the all-too-human fear of aging and the relentless passage of time.

Shyamalan’s film is not a direct adaptation of the graphic novel, although it keeps the same central premise and several key scenes. It’s more of a re-imagining, with the director fleshing out the narrative and amping up the tension to create an existential thriller that feels more like a “two-hour Twilight Zone episode,” per Shyamalan. Married couple Guy (Gael Garcia Bernal, Mozart in the Jungle) and Prisca (Vicky Krieps, The Phantom Thread) Cappa decide to take a family vacation at a luxurious tropical resort with their two children: daughter Maddox (Alexa Swinton), age 11, and son Trent (Nolan River), age six.

The resort manager (Gustaf Hammarsten) arranges a special excursion for the family: a day at a secret, secluded beach. They are not the only chosen ones. There is also a hip-hop artist named Mid-Sized Sedan (Aaron Pierre, Krypton); another married couple, nurse Jarin (Ken Leung, Star Wars: The Force Awakens) and psychologist Patricia (Nikki Amuka-Bird, Jupiter Ascending); and a cardiothoracic surgeon, Charles (Rufus Sewell, Man in the High Castle), his trophy wife Chrystal (Abbey Lee, Lovecraft Country), his mother Agnes (Kathleen Chalfant, The Affair), and their six-year-old daughter, Kara (Kylie Begley).

Nothing seems amiss at first, despite the lack of cell phone service, although the children do discover a stash of other people’s personal belongings half-buried under the sand. Then the corpse of a young woman washes up on the beach, and things take a turn for the creepy. Anyone who tries to leave the beach inevitably blacks out. The corpse decomposes in record time, and the children age several years over the course of a few hours. The beach essentially reduces 50 years of life into a single day, making their collective escape a matter of survival.

This is a fantastic concept, and one can see why it appealed to Shyamalan, who uses the premise to explore how the very different personalities trapped on the beach respond to their predicament. Visually, Old is a gorgeous film, almost entirely shot at Playa El Valle in the Dominican Republic. Shyamalan said his angular cinematographic approach was inspired by Akira Kurosawa’s Ran and Rashomon, in order to create an increasingly claustrophobic feel to what starts out as an idyllic beach setting. Composer Trevor Gureckis’ score reinforces the sense of foreboding, with strings playing detuned harmonies, and tribal bass drums evoking the relentless forward march of time.

There are some truly lovely moments in Old, especially with the Cappa family. Guy and Prisca must confront the issues in their marriage and struggle with watching their kids grow up way too fast—something Shyamalan, father to now-grown daughters, understands very well. Both Bernal and Krieps give exquisitely subtle performances, while Thomasina McKenzie (JoJo Rabbit) and Alex Wolff (Hereditary) are equally effective as the teenaged Maddox and Trent, respectively.

Unfortunately, the other characters aren’t nearly as fully developed, although the talented cast does its best to bring depth to underwritten roles that amount to little more than stereotypes. This is especially disappointing in the case of Chrystal, the trophy wife, whose entire sense of self-worth rests on her youth and physical beauty. Ours is a culture that treats aging women particularly harshly, and there could have been a fascinating character arc for Chrystal where she genuinely grappled with what sudden, rapid aging means for her sense of self. Instead, she becomes increasingly monstrous, which is far less interesting.

The biggest issue with the film is that Shyamalan just can’t resist trying to be clever, thereby undermining in the last 10-15 minutes the reflective, almost elegiac notes he achieves in the preceding scenes. All I will say about that twist ending is that it feels tacked on as an afterthought and is utterly inconsistent in tone with everything that comes before. Some things are best left unexplained. (The graphic novel that inspired Shyamalan, for instance, never explains the strange aging anomaly on the beach and ends with a cryptic scene of a young child building a new sandcastle all alone.)

I came out of the screening with mixed feelings, convinced that Old would prove to be divisive with both critics and audiences, and thus far that seems to be the case. (It’s even languishing a bit at the box office, although that’s probably as much due to spiking COVID cases dissuading folks from going to theaters as anything else.) Shyamalan has made several films hammered by critics at the time of their release, which were later re-assessed more favorably (see The Village). Perhaps Old will also be favorably re-assessed a few years down the road, despite its flaws, since it really does successfully evoke both an existential sense of dread and an ultimate acceptance of human mortality.

Old is now playing in theaters. We strongly recommend only watching movies in theaters if you have been fully vaccinated.