September 23, 2021 by arstechnica No Comments 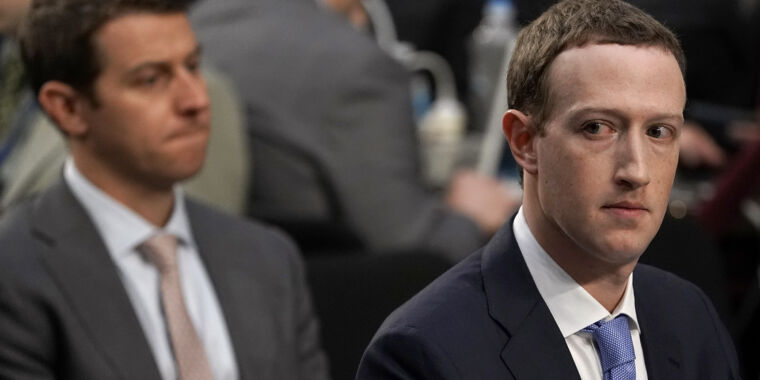 “Zuckerberg, Sandberg, and other Facebook directors agreed to authorize a multi-billion settlement with the FTC as an express quid pro quo to protect Zuckerberg from being named in the FTC’s complaint, made subject to personal liability, or even required to sit for a deposition,” the lawsuit says (emphasis in the original). An early draft of the order obtained by The Washington Post through the Freedom of Information Act shows that the commission was considering holding Zuckerberg responsible.

The FTC levied the fine in July 2019 in the wake of the Cambridge Analytica scandal, which saw political operatives harvesting the personal data of 50 million Facebook users without their consent. (The lawsuit says only 0.31 percent of the affected users consented.) The fine (which was a record for privacy-related penalties) was 50 times larger than the maximum prescribed by a previous FTC consent decree, the lawsuit alleges. It was also well in excess of the previous record fine of $168 million.

“Facebook’s maximum monetary exposure was $104,751,390—about $4.9 billion less than it agreed to pay,” shareholders said in the lawsuit. The overpayment, they said, is a breach of fiduciary duty.

The lawsuit also alleges that, by withholding information about the Cambridge Analytica leak, executives and board members, including Zuckerberg and COO Sheryl Sandberg, engaged in insider trading. “After Zuckerberg learned of Cambridge Analytica’s massive extraction of Facebook user data, he and the entities controlled by him significantly accelerated his sales of Facebook shares,” the lawsuit says.

The shareholders filed the lawsuit in Delaware’s Court of Chancery. Among the plaintiffs are a handful of pension and retirement funds, including the massive California State Teachers’ Retirement System, which manages over $250 billion. The defendants include Mark Zuckerberg, Facebook COO Sheryl Sandberg, several other executives, and members of the board at the time of the settlement, including Peter Thiel, Mark Andreessen, and Jan Koum, among others.

A second lawsuit, which has been consolidated with the first, also names Palantir Technologies, Thiel’s big data analytics firm. That lawsuit alleges tight ties between Palantir and Cambridge Analytica, citing a 2019 book by whistleblower Christopher Wylie. Wylie reported that several Palantir employees, including one of the company’s lead data scientists, routinely worked at Cambridge Analytica’s offices “in person, during normal business hours,” the lawsuit says. “The two companies were so intertwined that, as the Stanford Daily reported in April 2018, Palantir earned itself the moniker ‘Stanford Analytica.'” Palantir reportedly took steps to obscure the relationship.

Thiel was one of former President Donald Trump’s biggest supporters in the run-up to the 2016 election. The Trump campaign and Trump-aligned PACs both hired Cambridge Analytica to help run digital operations.

Ties between Zuckerberg, Thiel, and the Trump administration apparently ran deep. In October 2019, Zuckerberg reportedly met with Thiel, Trump, and Jared Kushner at the White House. “Thiel later told a confidant that Zuckerberg came to an understanding with Kushner during the meal. Facebook, he promised, would continue to avoid fact-checking po­litical speech,” Max Chafkin said in an excerpt from his new book. “If the company followed through on that promise, the Trump administra­tion would lay off on any heavy-handed regulations. After the dinner, Zuckerberg took a hands-off approach to conservative sites.”

The events of the last few years—from the Cambridge Analytica scandal to the platform’s role in the January insurrection at the US Capitol—have tarnished Facebook’s public image. Zuckerberg apparently wants that to change, and The New York Times is reporting that he has personally signed off on at least three new initiatives, including one known as Project Amplify that pushes Facebook PR into user’s feeds.

Executives from several parts of the company, including marketing, communications, policy, and integrity teams have all been involved, the Times reports. The main driver behind the changes is Alex Schultz, Facebook’s chief marketing officer, though Zuckerberg reportedly approved them all. Schultz apparently was the driving force behind an effort to restrict access to data for researchers and journalists. Instead, he preferred to release Facebook’s own spin, and the first report was only released last month. The first report was reportedly shelved out of concerns that the top link on the site that quarter was contributing to COVID-vaccine hesitancy.

Another initiative, known as Project Amplify, reportedly injects pro-Facebook content into people’s News Feeds. Joe Osborne, a Facebook spokesperson, has denied any changes to the News Feed’s ranking algorithm. Yet judging by the New York Times article, such changes may not be necessary. The company reportedly uses a tool known as Quick Promote to inject the content, which includes links to articles written by Facebook or third parties that cast the company in a positive light. The PR posts are flagged with small Facebook logos. Osborne said the posts are “similar to corporate responsibility initiatives people see in other technology and consumer products,” a statement which elides the fact that most other companies don’t have ready access to more than 2 billion people.

The company has insisted that many of the recent stories written about it—from the aforementioned article revealing Project Amplify to the extensive Wall Street Journal expose—contain falsehoods. “These stories have contained deliberate mischaracterizations of what we are trying to do,” Nick Clegg, Facebook’s vice president of global affairs, wrote in a blog post.

If Facebook is truly using its platform to improve its image, expect more stories with a positive spin to appear in News Feeds in the coming months: the whistleblower behind the WSJ’s series has turned over documents to lawmakers, The Washington Post reports. The person reportedly intends to go public by the end of the year, possibly by testifying before a Senate panel.